On August 25, 2021, Pfizer and BioNTech updated their vaccine data, and the neutralizing antibody titer induced by the third dose of the BNT162b2 vaccine was 3.3 times higher than before.

Based on the research data, the two companies are submitting supplementary approval applications to the U.S. Food and Drug Administration (FDA) to provide booster vaccination for people 16 years and older.

In terms of vaccines against COVID-19, BNT162b2 once again leads the way.

In this just-announced clinical trial, a total of 306 subjects aged 18-55 were enrolled in the group.
This group of subjects received the third dose of BNT162b2 4.8-8 months after the second dose of vaccine; one month later, the neutralizing antibody titer (NT50) of the booster vaccine was the same as the titer after the second dose. 3.3 times, exceeding the non-inferiority index of 1.5 times, and statistics suggest that the difference is significant.

The Delta mutant has reversed the epidemic!

Friends who are familiar with our official account may have noticed that from the FDA’s “categorically rejected” Pfizer CEO’s third vaccination proposal on July 8 to the “planned provision” of the third vaccination on August 5, there was only a gap. Less than a month.

During this period, the epidemic has undergone a fundamental change: the originally optimistic situation of epidemic control was completely reversed by the emergence of the Delta mutant. 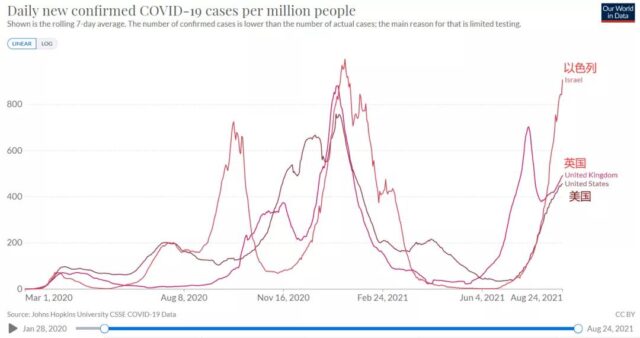 At the end of July, the congressional report file leaked by the Centers for Disease Control and Prevention set off a shocking wave in various media; because scientists confirmed that the basic infectious value (R0) of the Delta mutant strain turned out to be as high as 5-9.5, making it the most infectious three. One of the viruses. This means that the original plan of relying on vaccination to establish herd immunity is extremely difficult to achieve.

Facing the Delta mutant strain, the director of the US CDC exclaimed: The war has changed.

[Heavyweight] The internal documents of the United States CDC leaked, and the COVID-19 Delta mutant strain broke out as “one of the most infectious viruses”

In the second quarter quarterly reports of the two US mRNA COVID-19 vaccine companies, both showed that the neutralizing antibody titers decreased significantly after half a year of vaccination; the third dose of intensive vaccination became necessary and was also put on the agenda.

The CDC report at the end of July became an important turning point in the US anti-epidemic strategy.

On August 5, 2021, the United States made a major adjustment in its COVID-19 response measures: it plans to intensify the third dose of the COVID-19 vaccine for high-risk populations.

“We believe sooner or later you will need a booster for durability,”

On August 23, 2021, the U.S. Food and Drug Administration (FDA) officially approved the marketing of the COVID-19 vaccine BNT162b2 developed by Pfizer/BioNTech for vaccination of people over 16 years of age. Because of the official authorization, the trade name of BNT162b2 has also come out as Comirnaty.

Formal approval of vaccines can help companies, schools and states enforce vaccine regulations. The Pentagon of the United States has made a request on August 25: to order all active and reserve military personnel in the United States to be vaccinated.

The CDC in the United States reported for the first time that the protective power of the vaccine against the Delta mutant strain is significantly reduced, but it is more necessary!

On August 24, the US CDC released the report “Vaccine protection against infection is significantly reduced against Delta mutant strains”. It is not so much pessimistic and disappointing, it is better to point out the direction for the public: the third dose of intensive vaccination.

Many friends left messages in the background asking: If you want to intensive vaccination, which vaccine to choose?
To be honest, there is very little data for horizontal comparison. So we only show the data we found.

The United States CDC provided a vaccine against the Delta mutant strain, and its protection against infection has been reduced to 66%. The vaccines here include both Pfizer and Moderna’s mRNA vaccines, as well as Johnson & Johnson’s adenovirus vector vaccines.

The United Kingdom, which has always been regarded as the “testing ground for testing vaccines against Delta mutant strains”, provided a comparison between Pfizer’s mRNA vaccine and AstraZeneca’s adenovirus vector vaccine.
In this study published in the New England Journal of Medicine (NEJM), through follow-up and follow-up of 4,000 recently infected cases in the UK, it was found that two doses of BNT162b2 had a protective effect on preventing symptomatic infection of the Delta mutant strain by 88%; two doses of AZD1222 The protective effect of vaccination on the Delta mutant strain is only 67%.
The first real-world study on the protection of vaccines against Delta mutant strains was published, and the results are mixed

The more effective vaccine in the UK research, which is the first COVID-19 vaccine fully approved by the United States, is the mRNA vaccine BNT162b2 jointly developed by Germany’s BioNTech, China’s Fosun Pharmaceutical, and the United States Pfizer.

We look forward to the release of the third dose of the COVID-19 vaccine today, which will become a new starting point; it can lead to more rescue measures and give more hope to this world that is ravaged by the Delta mutant strain.