French research: ADE occurred in Delta variant and many doubts on it

French research: ADE occurred in Delta variant and many doubts on it.  Some people think that such grandstanding papers should be withdrawn.

Recently, a study on the COVID-19 antibody dependent enhancement (ADE) from Aix-Marseille Université in France has caused heated discussion. The study was published in the Journal of Infection in August.

The title of this article even refers to mass vaccination. Because the topic is too sensitive, it has caused a lot of controversy and refutation. Some people even began to question the overall academic level of the Marseille region in France and the editor of the infectious disease journal that published the paper. Level……

So, what did it say?

This study is a study that observes the relationship between the virus and the antibody and then performs modeling and analysis. The antibody used by the researcher was isolated from a symptomatic patient who was infected with the original wild-type virus. The main virus studied was not only Delta but also Kappa, which is b.1.617.1 and b.1.617.2. The more popular Delta is currently It’s the latter.

Through observing the molecular structure combination of the wild-type antibody and the two mutant strains and the energy change of the antibody and virus reaction, it is believed that the ADE effect that was suppressed in the wild-type virus and the corresponding antibody confrontation in the past is due to changes in the virus. Instead of being in a suppressed state, it has entered an enhanced state. 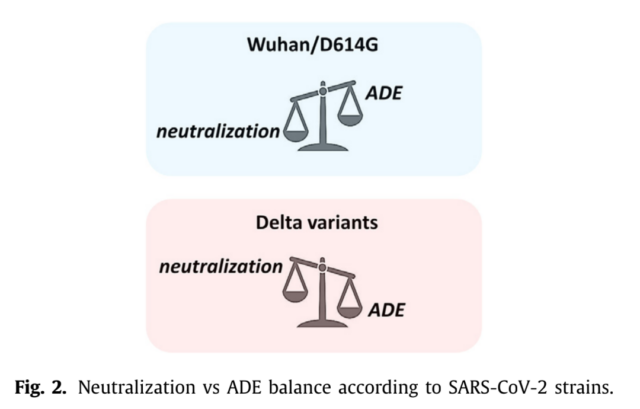 In terms of molecular model analysis, the researchers pointed out that the antibody (Ab-1052 in the figure below) enhances the efficiency of the NTD segment of the virus mutant strain to invade cells in the face of the mutant strain, making people more susceptible to infection.

In the conclusion, the author thinks that his findings are very “reassuring”, and also pointed out that more research is needed to understand Delta’s ADE problem. At the same time, they also suggested that next-generation vaccines must avoid these antigenic structures that may be related to this non-Fc receptor-related ADE mechanism.

Because of its involvement in vaccines, it has triggered a lot of criticism

After this article was published, it quickly attracted the attention of many people, and some independent reviewers and scholars began to actively criticize this research. One of the main reasons is that this article refers to vaccines, and even questioned large-scale vaccination from the beginning of the title. In the conclusion of the article, the author also emphasized that “the risk of ADE was clearly foreseen before mass vaccination.” This statement has caused dissatisfaction among many people.

Science’s independent Blogger Derek Lowe dissatisfied in a related review article and pointed out that the French research team’s molecular research is out of reality. If Delta really causes ADE, it should be obvious to people who have been vaccinated on a large scale. Clinical outcomes such as worsening of the disease and increased deaths, but these phenomena have not appeared now.

At the same time, he believes that the team’s molecular research is not reliable. In previous related studies, the team believes that the combination of azithromycin and hydroxychloroquine is helpful for the treatment of COVID-19, but clinical data proves which of the two drugs None worked.

This review also raises a pretty good question, that is, shouldn’t this French study give priority to the belief that recovered patients who have been infected with the wild-type virus are more likely to develop ADE when faced with Delta?

In fact, after India faced the first wave of wild-type infections, its government conducted antibody sampling tests on local people. In the big cities of Delhi and Mumbai, the antibody positive rates after the first wave of infections were higher, exceeding 50%. The second wave of India’s situation with the Delta mutant strain is very bad. To this day, some researchers still believe that India has underreported 3 million deaths, and Mumbai and Delhi have also been severely affected by the Delta epidemic. Whether this can support the conclusions of the French researchers is not yet known.

In the Indian news on February 2 this year, health officials announced that 56% of the population in Delhi was positive for the COVID-19 antibody. Then in the second wave of the epidemic, such a high positive rate still failed to stop the death peak that was much higher than the first wave.

And another point worth noting is that in the French team’s paper, they pointed out that the ADE effect of the antibody caused by the wild-type virus on Delta is to “allow the virus to invade cells more efficiently”, but did not explicitly state this. The infection enhancement effect will cause the disease to become more severe.

The views are severely torn, and the disputes are out of the scope of ADE

The scientific research in this area is controlled by academic misconduct forces, and some people have begun to question whether journal editors do not check, the level is low, and all articles have been reviewed and published, or that the publishing group only cares about the page cost and not the quality of the article.

Some people think that such grandstanding papers should be withdrawn.