Obesity has been recognized as a worldwide epidemic. According to statistics from the World Health Organization (WHO), the prevalence of obesity has almost tripled in the past 40 years.

Obesity can lead to many related diseases, such as cardiovascular disease, type II diabetes, high blood pressure and cancer, etc. It is even associated with depression and social discrimination.

Dietary fiber is a class of non-starch polysaccharides, including some fruits and whole grains. These substances can help increase satiety and reduce energy intake to achieve the effect of reducing obesity. And because it does not increase energy, blood sugar will not increase, which reduces the incidence of diabetes.

In addition, dietary fiber can absorb bile acids, promote the decline of fat and cholesterol absorption, and reduce the risk of coronary heart disease. DFs can be synthesized into short-chain fatty acids in the body, which is conducive to the growth of intestinal probiotics. DFs swell in contact with water and promote intestinal peristalsis, which accelerates the excretion of metabolic waste from the body.

Deduced from the evolutionary history of humans, the human gastrointestinal system (gastrointestinal, GI) has adapted to the intake of high-fiber foods. And now the shift from a diet rich in fruits and vegetables to a diet rich in animal protein and refined foods is also part of the reason for the obesity epidemic.

The prevention and treatment of obesity often starts with diet. Increasing the intake of vegetables and fruits is an effective dietary intervention for obese patients. Because vegetables and fruits are not only rich sources of vitamins, minerals, and phytonutrients, they can help people reduce calories. It is mainly due to the fact that plants are rich in DFs and contain higher water.

Despite all this talk, there are still people who say: “Exercise and diet, concubines can’t do it.” Needless to say, exercise needs to control staple foods and limit pure sugar and sweets. How does this make milk tea girls live? It doesn’t matter, we have a more scientific way to lose weight.

Recently, a research team from the University of Salento in Italy published a research paper titled “Biomimetic cellulose-based superabsorbent hydrogels for treating obesity” in the journal “scientific reports”, reporting for the first time a generally recognized safety (Generally Recognized as Safe, GRAS) The method of bionic cellulose super absorbent gel is used to treat obesity. 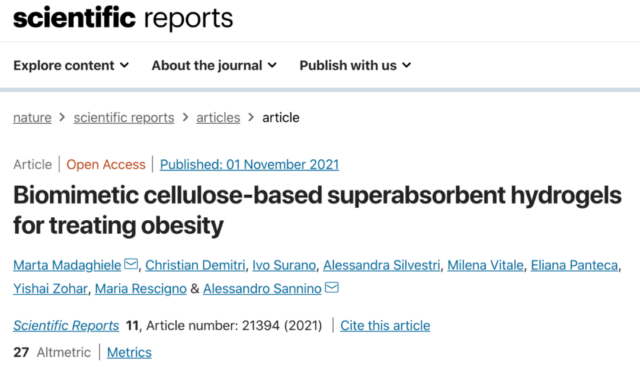 In view of the need to constantly spend a lot of time and self-control when exercising and dieting, researchers are committed to designing a hydrogel that only requires oral administration, which is directly conducive to weight control. This unabsorbed hydrogel can not only reduce the calorie density of meals, but also increase the elasticity of food intake like raw vegetables.

The researchers designed it based on the basic components and structural characteristics of vegetables, and at the same time gave the hydrogel unique high water absorption, enabling it to meet the two key requirements of ease of use and practicality at the same time. This is also the first reported GRAS-level edible super absorbent technology. 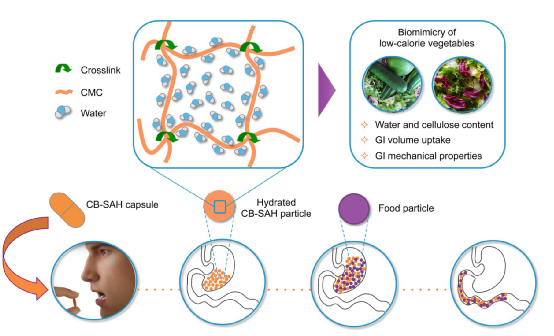 The researchers studied the synthesized CB-SAHs with different elasticity levels and selected the most suitable samples for further development. Next, the absorption, elasticity and mechanical properties of CB-SAHs were evaluated under simulated gastrointestinal conditions, and they were found to be consistent with expectations. CB-SAHs have good absorption capacity and more extensive degradation.

Finally, the research team also used an in vitro organ culture model to evaluate the potential impact of CB-SAHs on the health of intestinal tissues, and tested the safety and effectiveness of these products. Finally, the most suitable and safe hydrogel for clinical use was determined.

So why can oral CB-SAHs be taken before meals to increase satiety and help control weight?

The researchers gave a possible mechanism:

The underlying mechanism of the action of CB-SAHs

However, CB-SAHs cannot be used as a substitute for vegetables because they do not contain any micronutrients. In this way, an oral, non-systematic weight management tool is created, mainly through the mode of action of mechanobiology.

During the publication of the paper, CB-SAHs products have been clinically studied in the United States and Europe, and have obtained regulatory approvals. These indicate that for the treatment of overweight and obese patients, hydrogel can be used as an effective auxiliary tool for weight management and can be used in combination with diet and exercise.

It is worth noting that there is no limit to the use time of the hydrogel, because this method has good safety. In clinical studies, no serious adverse events occurred in the CB-SAH group.

CB-SAHs is still in the clinical research stage. Its advent will be a boon to many obese patients. Let us look forward to the surprises that it will bring to us after its successful development!