High-fat diet can interfere with the biological clock and cause obesity.

Obesity is not only a feature but also a disease. Obesity is one of the top ten chronic diseases identified by the World Health Organization. Obese people are more likely to suffer from metabolic diseases and cardiovascular and cerebrovascular diseases, and are even related to a variety of cancers. In China, there are more than 300 million people who are overweight and obese. Weight loss has become a hot topic after dinner.

A high-fat diet refers to eating foods rich in fat. It is well known that a long-term high-fat diet may induce a variety of chronic diseases, obesity, and even cancer.

On September 6, 2021, researchers from Jagiellonian University in Poland and the University of Bristol published an article in The Journal of Physiology entitled: Rhythmic neuronal activities of the rat nucleus of the solitary tract are impaired by high- A research paper on fat diet-implications for daily control of satiety.

The study shows that a high-fat diet can disrupt the brain’s biological clock that controls satiety, leading to overeating and obesity.

It has always been believed that the main biological clock is only located in the hypothalamus in the brain. However, studies over the years have shown that a group of neurons in the ancient brainstem that control our body’s hormone levels, appetite and other biological clocks is called the dorsal vagus nerve complex (DVC). Specifically, DVC has been shown to control food intake by inducing satiety.

In order to simulate the impact of unhealthy diets on humans, the researchers introduced this new diet method to adolescent mice (4 weeks old) and monitored their food intake for four weeks and 24 hours. 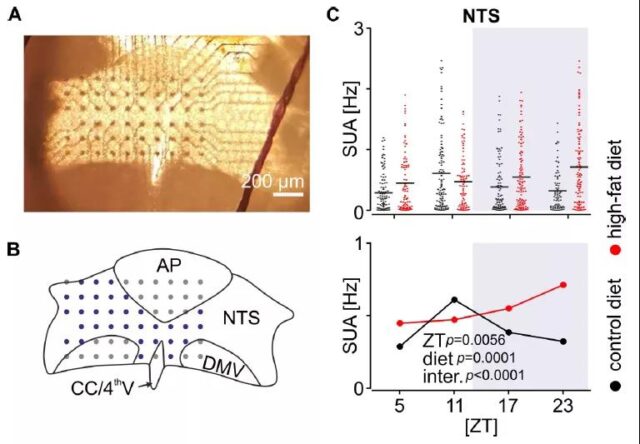 The researchers found that mice fed a high-fat diet showed changes in the daily neuronal rhythm of DVC and changes in the response of these neurons to appetite hormones before they started to gain weight.

Studies have shown that short-term consumption of a high-fat diet will increase food intake during the day and slow down the daily rhythm of neuronal firing. 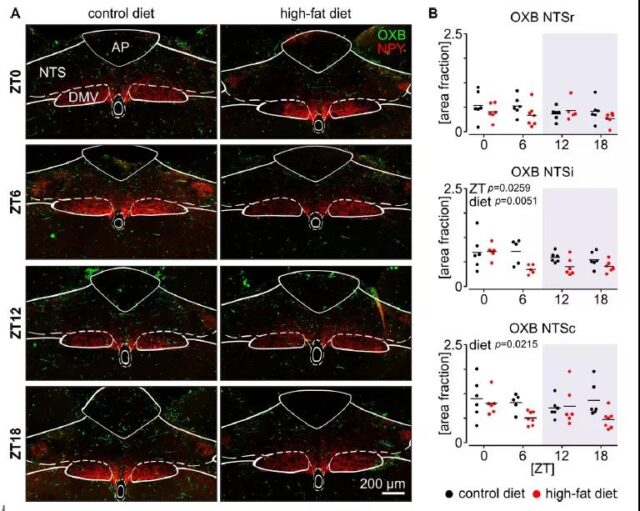 In addition, studies have found that a high-fat diet inhibits the neurotrophic salt response to metabolic neuropeptides, and reduces orexin immunoreactive fibers in the structure.

These changes occur without a significant increase in body weight, indicating that the initial effect of a high-fat diet is to reduce the activity of neural stem cell rhythms, thereby removing the mechanism that inhibits eating during the day.

In short, the study emphasized that a high-fat diet can disrupt the brain’s biological clock that controls satiety, and ultimately lead to overeating and obesity.

Although the brain stems of humans and mice share common characteristics, the main limitation of this study is that it was conducted on nocturnal animals (mice). The peak of DVC activity appears at the end of the day, when rodents are in a resting period, while humans are in an active period. Therefore, if the phase of the brainstem clock is set to day and night, it still depends on the pattern of rest and activity, this remains to be determined.