When it comes to ultrasound, the first thing that comes to mind is ultrasound. Today we are going to introduce a kind of ultrasound that can physically kill tumor cells – High Intensity Focused Ultrasound (HIFU) .

However, T-HIFU has certain limitations in cancer treatment [1], such as the inability to completely kill tumor cells, the development of drug resistance (especially in large tumors) at a later stage of treatment, and the inability to kill the primary tumor site other than metastatic cancer cells, etc.

Due to the above limitations, Takuya Osada’s team at Duke University Medical Center has been working to improve the therapeutic effect of HIFU. The hard work pays off, and the Osada team has developed an alternative form of T-HIFU to destroy tumors . The Osada team named it mechanical high-intensity focused ultrasound (M-HIFU) .

Previous studies by Osada’s team showed that compared with T-HIFU, M-HIFU increased the accumulation of dendritic cells in tumors, exhibited stronger antitumor efficacy, and reduced the risk of metastasis; in addition, they also observed Increased T cell infiltration [2]. However, why M-HIFU can stimulate stronger anti-tumor immunity is still poorly understood.

Recently, the research team led by Professor Osada published important research results in the famous journal Journal for ImmunoTherapy of Cancer [3], which solved the mystery for us.

They found an increase in T-cell infiltration in the tumor microenvironment (TME) following M-HIFU treatment, as well as a switch of macrophage subtypes .

In addition, they also noticed an upregulation of immune checkpoint molecules such as PD-1, PD-L1, LAG-3, and TIM-3 .

Screenshot of the homepage of the paper

Next, let’s take a look at how the Osada team carried out this research.

The Osada team first investigated the therapeutic effect of M-HIFU in different mouse models of breast cancer. They selected the MM3MG-HER2 breast cancer cell line that is easy to metastasize and develop drug resistance [4].

Subsequently, they subcutaneously inoculated the MM3MG-HER2 breast cancer cell line into BALB/c mice, and then divided them into three groups, one was treated with M-HIFU, the other was treated with T-HIFU, and the last group was not treated as a control group , the antitumor effect of M-HIFU was evaluated according to the overall survival rate and tumor volume of tumor-bearing mice.

The experimental results showed that compared with T-HIFU and untreated groups, M-HIFU-treated tumor-bearing mice had a higher overall survival rate and stronger tumor control . This result was also confirmed in two other breast cancer models, E0771-OVA and JC-HER3.

Why is M-HIFU so effective? The Osada team believes that one of the important reasons is the improvement of TME .

To test this hypothesis, Osada’s team analyzed TME changes at the cellular and gene levels. Both multicolor flow cytometry and single-cell sequencing demonstrated that the immunosuppressive TME in breast cancer was reversed after M-HIFU treatment: CD4+, CD8+ T, and NK cell numbers were all increased, and CD8+ was in an activated and proliferating state T cells increased; although the number of TAMs did not change significantly, TAMs polarized toward M1 increased; at the same time, the expression of various immune checkpoints (PD-L1, LAG-3) also increased . 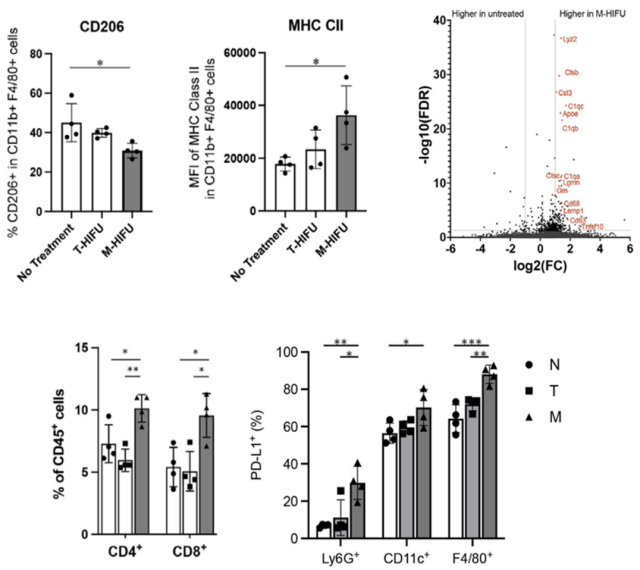 Considering the increase in PD-L1 expression after M-HIFU treatment, the Osada team asked a second question: Is there a synergistic effect of combining M-HIFU and PD-L1 inhibitors in breast cancer?

The experimental results showed that compared with the single treatment group, the overall survival rate of the tumor-bearing mice in the combined treatment group increased, and the proportion of complete tumor regression was the highest.

So how did the TME change in the combination therapy group? Multicolor flow cytometry proved that immune effector cells such as CD4+ and CD8+ T cells increased in the TME of the combined treatment group, and the number of other cells did not change significantly.

So which immune cells play a major role in the combination therapy? The Osada team used antibodies to remove CD4+, CD8+ T and NK cells, respectively.

The previous experimental results revealed the important role of CD8+ T cells in combination therapy. Then the Osada team further performed single-cell sequencing on the tumor tissue of breast cancer mice, and focused the sequencing on CD8+ T cells.

In addition, Osada’s team also found 335 differentially expressed genes (DEGs) in TAM in the combination treatment group, and these genes were mainly enriched in lymphocyte migration, defense response to tumor cells, and interaction with extracellular matrix/fibroblasts related signaling pathways, these results may indicate that macrophages in combination therapy are actively involved in antitumor immunity and tissue remodeling after tumor destruction by ultrasound .

Based on the characteristics of breast cancer that is easy to metastasize, T-HIFU cannot kill metastatic cancer cells beyond the primary tumor site.

So next, the Osada team studied whether M-HIFU treatment and combined immunotherapy can produce distant effects.

What is the distance effect? “Distant effect” refers to the therapeutic effect of a local tumor treatment on a distant tumor.

The first is the distant effect of M-HIFU treatment. The MM3MG-HER2 breast cancer cell line was subcutaneously inoculated into both sides of BALB/c mice, and then one side of the tumor was treated with M-HIFU.

The experiment found that the untreated tumor on the opposite side of the M-HIFU treatment group became smaller, indicating that M-HIFU -HIFU has a distant effect . 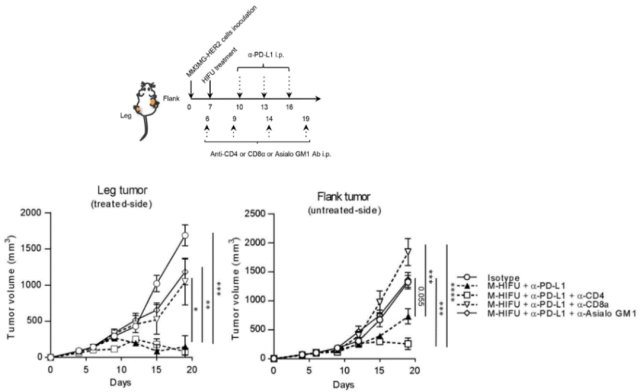 These findings suggest that M-HIFU in combination with PD-L1 inhibitors may help reduce late recurrence or metastasis when treating primary tumors.

This research allows us to see the prospect of M-HIFU treatment, but there are still many problems to be solved in order to really apply it to the clinic, such as how to control the dose in the human body, and how to deal with the possible occurrence of M-HIFU in the human body. side effects etc. Next, let us wait and see how this new therapy will be applied to the clinic!

1.Sabel MS. Cryo-­immunology: a review of the literature and proposed mechanisms for stimulatory versus suppressive immune responses. Cryobiology 2009;58:1–11.