Antibody Research once analyzed that while bi-epitope ADC solves the problem of non-response to drugs with low antigen expression, its toxicity problem is very worthy of consideration, and it is also a very big hidden danger.

This article focuses on the current research progress and difficulties of dual-antibody ADC for readers.

In recent years, with the maturity of ADC technology, ADC drugs targeting Her2, such as T-DM1 and DS-8201 (T-DXd), have been applied in the field of HER2-positive breast cancer with outstanding results.

Although the density of HER2 antigen on tumor cells is lower, a higher drug-to-antibody ratio can improve antitumor efficacy.

Alternatively, there is the bystander-killing effect: using cleavable linkers, ADCs can be engineered to facilitate the release of chemotherapeutic drugs from target cells to the extracellular periphery, thereby killing surrounding cells that may or may not express the ADC target antigens to maximize the removal of tumor cells.

The most noteworthy is the third-generation ADC drug DS-8201 , jointly developed by AstraZeneca and Daiichi Sankyo, by combining the human HER2 antibody trastuzumab with a novel topoisomerase through a tetrapeptide linker. I Inhibitors link, target cancer cells and deliver the drug inside the cell. The DAR of DS-8201 is as high as 8 , that is, 8 chemotherapeutic drugs ( Dxd ) can be coupled to one antibody molecule .

In the field of breast cancer and gastric cancer, it has shown very excellent therapeutic effects. 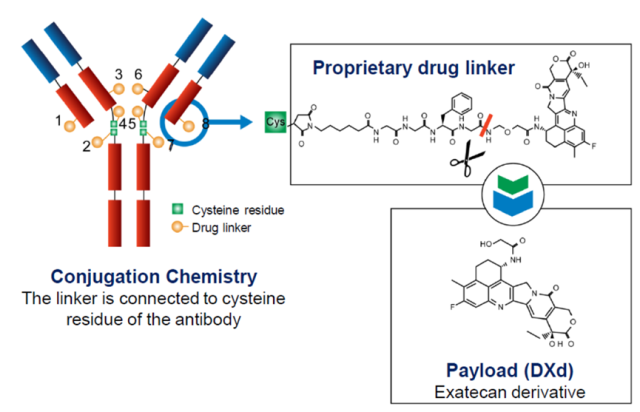 The amazing clinical efficacy of DS-8201 is changing the design concept of low DAR with highly toxic payload in the traditional ADC field. High DAR with toxic payload may be the future development direction.

In the technical transition from monoclonal antibody to double antibody, CAR-T to duoCAR-T, ADC has also begun to iterate technology to bispecific antibody ADC drugs. Dual-antibody ADC drugs that combine the advantages of double-antibody and ADC can achieve the following two advantages:

Research in this area is still in the early exploratory stage, and the fastest progress is ZW-49, a bispecific antibody ADC drug jointly developed by Zymeworks using its proprietary Azymetric™ Bispecifics and ZymeLink™ ADCs platforms.

Capable of simultaneously specifically binding to two non-overlapping epitopes of the HER2 receptor, the Pertuzumab binding site and the Trastuzumab binding site. It is expected that in clinical application, it will have a good therapeutic effect on patients who are resistant to new ADC drugs such as trastuzumab, pertuzumab, and even TDM-1.

In view of the great potential of ZW-49, in 2018, BeiGene and Zymeworks Inc. reached a strategic cooperation on the clinical development and commercialization of ZW49 and ZW25. 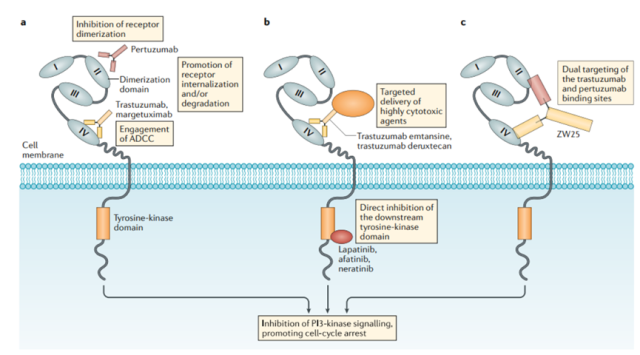 Figure 3 Mechanism of action of drugs targeting HER2

The antibody part of ZW49 adopts an antibody structure similar to ZW25 (a bispecific antibody that simultaneously binds two non-overlapping epitopes of HER2).

Through Zymelink technology, the connected payload is a microtubule inhibitor derived from the chemotherapeutic drug auristatin. In the patient’s body, the HER2 binding effect similar to that of ZW25 can theoretically be achieved, thereby releasing the cytotoxic substances carried inside the cancer cells to achieve the maximum killing effect.

In January 2021, Zymeworks announced partial data from the Phase I clinical trial of ZW-49. The results showed that ZW-49 exhibited antitumor activity across all treatment regimens and dose levels. Partial environment (PR) and stable disease (SD) were observed in both Q2W and Q3W dosing regimens.

And in all 35 patients who received ZW-49 treatment, there was no treatment-related hematological toxicity, pulmonary toxicity and liver toxicity. More than 90% of adverse reactions were mild or moderate.

Figure 5 Schematic diagram of the structure of MEDI-4276

It is a bi-epitopic tetravalent HER2 ADC drug. MEDI4276, with 39S (epitope similar to Pertuzumab, fully human antibody, recognizes domain 2) as the backbone, is connected to the scFv structure of trastuzumab (recognizes domain 4).

The recognition epitopes for 39S and trastuzumab are located at opposite ends of the HER2 ECD and are >90 Å apart from each other.

The DAR is 4, the linker is maleimidocaproyl linker, and the toxin is tubulysinwarhead.

However, the clinical development of MEDI4276 suffered a severe setback, so that development was terminated .

MEDI4276 did achieve a certain efficacy in patients who were resistant to trastuzumab, pertuzumab and TDM1 therapy. However, the toxicity problem caused the death of the entire project.

In the entire ADC field, the main trigger point of toxicity problem is actually mostly from linker/payload, but MEDI4276 has a certain degree of targeted toxicity, causing DLT.

Therefore, while the bi-epitope ADC solves the problem of non-response to drugs with low antigen expression, its toxicity problem is very worthy of consideration, and it is also a very big hidden danger .

ZW49 has made some improvements. At present, it only shows preliminary clinical efficacy, which is not amazing, but there is no serious toxicity problem related to MEDI4276. It can still continue to climb, and its follow-up results are still worth looking forward to.

Although many innovative technologies have not been verified in clinical programs, the results of preliminary research are still encouraging. It is believed that in the near future, ADC will usher in more brilliant prospects in the future, and may also act on other diseases, not only Cancer treatment, let us look forward to it and work hard for it.