Hong Kong government: “Both types of COVID-19 vaccines provided in Hong Kong are highly effective and safe in reducing severe illness and death after infection.”

Among the 1,486 deaths in Hong Kong, the proportion of inactivated vaccines is as high as 87%, which is more than 7 times that of mRNA vaccines?

This shocking data comes from the relevant Hong Kong media, which recently reported the number of deaths after different vaccines, causing the industry to question the effect of inactivated vaccines.

To this end, yesterday (20th), the Hong Kong Special Administrative Region government issued the “Clarification of the Report on Vaccination of Death Cases of Coronavirus Disease 2019”, expressing regret for the misleading reports. Highly effective and safe for severe and fatal cases.

The Hong Kong government further released the data, in terms of death cases in the age group over 80:

Infection mortality rates of two doses of inactivated vaccine and mRNA vaccine decreased to 2.95% and 1.51%, respectively. 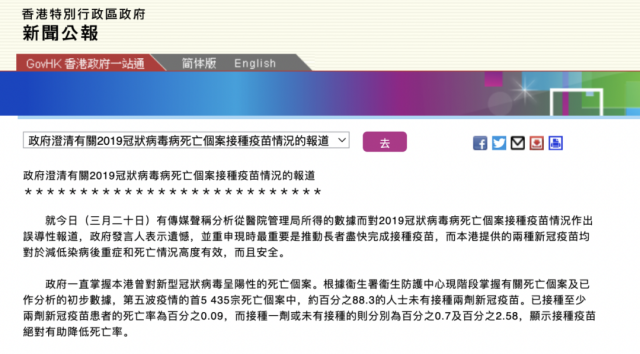 In this clarification, the Hong Kong government did not name the specific media. Howeverr  it was found that this Sunday (20th) , a Hong Kong media released a report saying:

Although the relevant media emphasized that the data did not adjust for age factors for reasons such as “the number of elderly people who received inactivated vaccines is already more” and “the elderly have a higher risk of death”.

At the same time, Liu Yulong, chairman of the Scientific Committee on Vaccine Preventable Diseases, also told relevant media that other interference reasons should be considered when analyzing the data, such as the proportion of two vaccines in different age groups, vaccination time, age, etc., while most of the elderly are vaccinated.

Live vaccines need to be statistically “regression analysis”, and the number of deaths from the two vaccines cannot be simply compared.

However, because the data at the beginning of the conclusion was too “shocked”, the report caused widespread social discussion, and the death data of more than 7 times also caused the public to question the effect of inactivated vaccines.

The Hong Kong Government reiterates: Both vaccines are effective against severe illness and death

The Hong Kong government emphasized in the clarification that the analysis of the type of vaccination among the deceased vaccinated patients is more complicated, and it is necessary to explore the individual circumstances of each death case, such as the age of the deceased and chronic disease records, etc.

In addition, more elderly people must be considered. The factors of vaccinating Sinovac vaccine should not be drawn casually.

Among the 3,837 deaths in the elderly over the age of 80 that have been preliminarily analysed:

The Hong Kong government reiterates that the two COVID-19 vaccines provided in Hong Kong are highly effective in reducing severe illness and death after infection, and strongly urges the public who have not been vaccinated to get vaccinated as soon as possible, especially the elderly and long-term patients who are at high risk of death after contracting the COVID-19 virus. patients and others with weakened immune systems.

Vaccination may also be one of Hong Kong’s last “weapons” at this stage.

According to a number of media reports at home and abroad, the Chief Executive of the Hong Kong Special Administrative Region, Carrie Lam, held an anti-epidemic press conference today (March 21) , saying that Hong Kong will suspend compulsory testing for all citizens, and will cancel all tests including the United Kingdom and the United States from April 1. Nine countries have banned flights, and schools can resume face-to-face classes from April 19.

By April 20, if the epidemic does not rebound, other epidemic prevention measures will be relaxed in three phases, including:

Carrie Lam said that during this month, we will strive to focus on treatment, reduce severe illness and reduce deaths, and further increase the vaccination rate: