Liver cancer kills 25,000 people annually in Japan. According to the revision of the clinical practice guidelines last year, if the tumor is 3 cm or less and 3 cm or less, the same effect as surgical excision can be expected with ablation therapy.

A needle-shaped electrode is pierced from above the skin, and the lesion is burned off by the heat of electromagnetic waves. The advantage is that the burden on the patient’s body is small and even if it recurs, it can be treated repeatedly. (Sota Ueki) 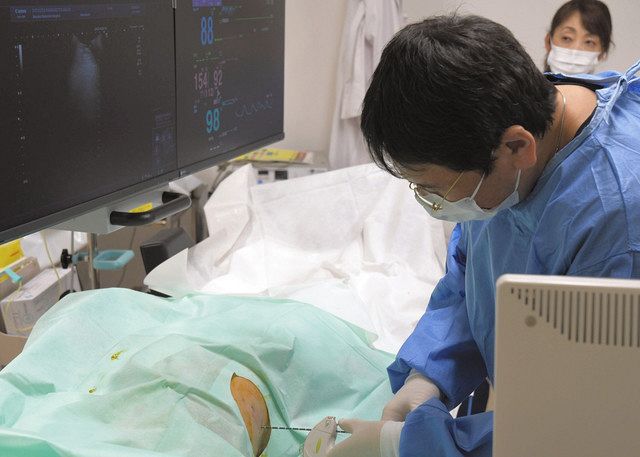 Dr. Hotta (right) piercing the patient with an electrode needle while checking the situation on the monitor = at Masuko Memorial Hospital in Nagoya City

“Equivalent to excision” The burden on the patient is light

In mid-February, a man in his seventies who was treated had an onset about ten years ago. He has been receiving ablation therapy for each recurrence, which is the fourth time.

On this day, the goal is a tumor 2 cm in diameter near the back. Naoki Hotta (55) of the Department of Liver and Gastroenterology confirmed the position accurately by using a computer tomography (CT) image taken in advance.

After he underwent local anesthesia and cut a few millimeters of skin, he pierced an electrode with a diameter of 1.8 mm, he turned on a switch that generates electromagnetic waves when it reaches near the tumor.

The next day, CT confirmed the death of the tumor. There are radio waves and microwaves in ablation therapy, but this time I used the same microwaves as in a microwave oven. The feature is that a wide area can be burned into a beautiful spherical shape in a short time. The man said, “It doesn’t hurt so much, and it’s good to be hospitalized in about three days.”

Cauterization therapy began in Japan in the 1990s. Compared to surgery to open the abdomen and remove the tumor, the burden on the patient is lighter and it is easier to preserve liver function. Radio frequency treatment, which slowly burns a wide area into an oval shape, was covered by public medical insurance in 2004.

In 17 years, it was possible to burn larger than the conventional microwave, and the treatment with the next-generation microwave introduced by the hospital was also applied. It depends on the size of the tumor, but the cost is about 45,000 to 65,000 yen (368 to 532 US dollar) with a 30% burden.

According to Shuichiro Shiina (65), a professor of diagnostic imaging and treatment at Juntendo University School of Medicine, who is familiar with ablation therapy, it is currently being implemented at more than 1,400 facilities nationwide.

According to national cancer statistics, 40,000 people develop liver cancer annually, and the 5-year survival rate is 35%. Even after treatment, 70 to 80% will relapse within 5 years. Most of the onset is after the sixties, and the causes are viral hepatitis including hepatitis C, alcoholic hepatitis, and chronic inflammation due to fatty liver.

In 2011, the results of research observed over five years on 308 people who were treated at 49 hospitals nationwide from 2009 to 2015 were announced. The purpose is to compare the effects of excision and radiofrequency ablation treatment.

They found no significant difference in survival or survival without recurrence. According to the clinical practice guidelines revised in October of the same year, if the number of tumors is within 3 cm and 3 or less, resection and ablation therapy are treated equally. Shiina says, “If you use a molecular-targeted drug with remarkable progress to make the tumor smaller and then burn it, you can cure even more advanced cancer.”

On the other hand, there are also issues. The liver, which is the largest of all organs, has various tumor locations and shapes. Poor technique risks leaving the tumor unburned and burning blood vessels and surrounding organs. In January, Mr. Shiina established a study group with the aim of sharing technology and experience. She disseminates know-how at home and abroad.

If liver cancer is found early, there are many treatment options, including ablation therapy, and good results can be obtained. Mr. Hotta complains, “If you have hepatitis or fatty liver, please take regular tests.”