Wearing a “headgear” can cure cancer when you turn on the electricity. You might sneer at it, don’t be kidding! Isn’t this a fantasy? of course not! This is the treatment method of black technology “tumor electric field therapy”!

In fact, in popular terms, electric field therapy is a physical therapy based on bioelectricity. This therapy uses alternating low-intensity electric fields to destroy tumor cells while reducing damage to healthy tissues, which can well avoid side effects that affect the quality of life of patients.

Since its inception, electric field therapy has received widespread attention from the medical community, not only because its principles have never been heard before, but also because such a fantasy-like technology is not a big flicker, but is based on rounds of truth. The clinical trials were effective and exciting, and the US FDA have been approved it to enter clinical applications.

In 2011, the FDA approved electric field therapy for relapsed glioblastoma;

In 2019, the FDA approved electric field therapy for mesothelioma.

At present, this anti-cancer black technology is expected to make a breakthrough in a more promising market. On April 13, Optune announced good news in the field of indications for large cancer types of lung cancer: the ongoing clinical trials will end early.

Although no specific details were disclosed, the stock prices of Novocure and Zai Lab, which owns the commercialization rights of Optune products in China, soared due to the impact of the news, and the market value increased by a total of 9.265 billion US dollars.

Liver cancer has always been relatively high in mortality, but the rate of early liver cancer detection is very low. More than 90% of it is found to be in the advanced stage.

At present, the general standard treatment for patients with advanced disease and local treatment progress is systemic treatment of sorafenib, levatinib or atezizumab plus bevacizumab.

However, these therapies have two unavoidable problems. One is side effects, and the other is drug resistance after a period of time.

Therefore, new treatments with better curative effects, safe, non-invasive, and long-term effective are being developed around the world.

On July 1, 2021, Novocure announced that its tumor electric field therapy combined with sorafenib has achieved positive results in the phase 2 clinical trial HEPANOVA for the treatment of patients with liver cancer.

The test results showed that among 21 evaluable patients with poor prognosis, the disease control rate was 76% (43% to 52% in the historical control group), and the objective response rate was 9.5%;

Among patients who completed at least 12 weeks of tumor electric field therapy, the disease control rate was 91%, and the objective remission rate was 18%, both higher than the historical control group.

In the next step, Novocure plans to launch a pivotal Phase 3 trial to explore the efficacy of tumor electric field therapy combined with standard treatments (including immunotherapy) in patients with liver cancer.

The first new therapy in 15 years, the tumor treatment electric field is approved as the first-line treatment of mesothelioma

On May 24, 2019, Novocure announced that the U.S. FDA approved the company’s NovoTTF-100L system to be used in combination with pemetrexed and platinum-based chemotherapy for the first-line treatment of unresectable locally advanced or metastatic malignant pleural mesothelium Tumor (MPM).

NovoTTF-100L is a non-invasive, anti-mitotic cancer therapy that uses a tumor treatment electric field to treat the tumor area. It is worth noting that NovoTTF-100L is the first new treatment for MPM approved by the FDA in 15 years.

MPM is a rare cancer caused by asbestos exposure. Before the FDA approved NovoTTF-100L, the combination therapy of pemetrexed and cisplatin was the only approved therapy for the treatment of unresectable MPM.

In this single-arm clinical trial, 80 MPM patients received the first-line treatment of a combination therapy consisting of NovoTTF-100L and chemotherapy.

Among patients who had received at least one follow-up CT scan, the disease control rate reached 97%, and the partial response rate was 40%.

MPM is a catastrophic disease. Only 10% to 20% of patients can undergo surgery to remove the tumor. Generally, patients with mesothelioma who cannot receive surgery can only rely on palliative care to relieve their symptoms. NovoTTF-100L provides them with a treatment option that may improve survival.

It generates an electric field around the tumor, destroying the growth and reproduction of cancer cells 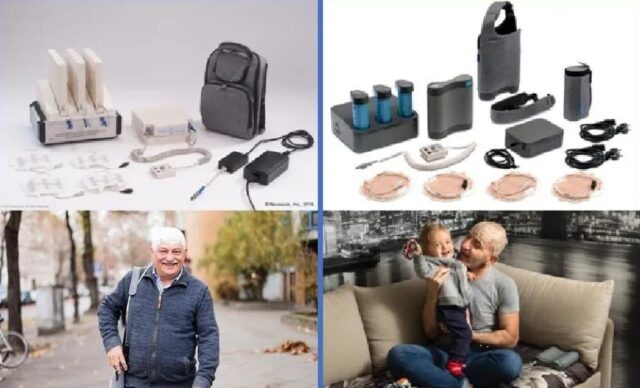 The device has been approved by the U.S. Food and Drug Administration and the European Union. Doyle said that in the United States, about 40% of more than 7,000 brain tumor patients have received electric field therapy. The device can also be used in Germany, Japan and now Hong Kong.

The reason why this therapy is called anti-cancer black technology is that its principle is different from all traditional treatment modes, including surgery, drug therapy, and radiation therapy.

This principle is simple, but in fact it is extremely complicated. It is the most sci-fi anti-cancer therapy in history. For details, you can log in to Cancer Free Home for more details.

At present, electric field therapy has been approved by the FDA for the treatment of recurrent glioblastoma, newly diagnosed glioblastoma, and malignant pleural mesothelioma, and is currently used in six major solid tumors including non-small cell lung cancer and non-small cell lung cancer. Surprising data have been obtained in clinical trials of lung cancer, brain metastasis, liver cancer, pancreatic cancer, ovarian cancer, and breast cancer. Since its principle is to target and kill all rapidly mitotic cancer cells, it is theoretically applicable to all solid tumors.

It is worth mentioning that this “all-round dark horse” has been clinically proven to be more suitable for Asian patients. In the internationally renowned EF-14 trial, during a 5-year follow-up, regardless of health status, age, gender, and tumor size, the electric field The treatment plus chemotherapy group lived longer. The five-year survival rate is as high as 13%, compared to only 5% in the chemotherapy group. Extends more than twice! This is absolutely unprecedented. 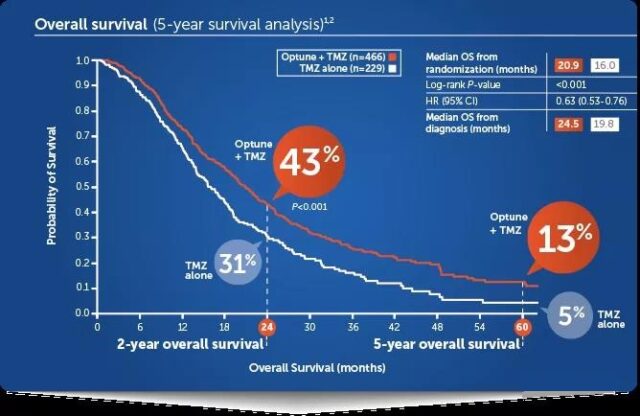