WHO announced the composition of influenza vaccine strains in 2022-2023

WHO announced the composition of influenza vaccine strains in 2022-2023. What kind of research should we conduct?

From the Spanish flu in 1918 to the present, the flu has been one of the strongest opponents of mankind for more than 100 years. As an RNA virus, the influenza virus, despite its simple structure, appears to be more mutated and transmissible than humans can respond.

The World Health Organization (WHO) announces the components of influenza vaccines for the northern and southern hemispheres of the next season in the first and second half of each year [1] .

The downfall of the official organization also represents the importance of influenza vaccine research.

Recombinant influenza protein can be used in all aspects of vaccine development, such as vaccine content detection, vaccine biological titer detection, and toxicological experimental research. Among them, the key target proteins play an important role in research, such as HA, NA, NP and other important target proteins (as shown in Figure 1). 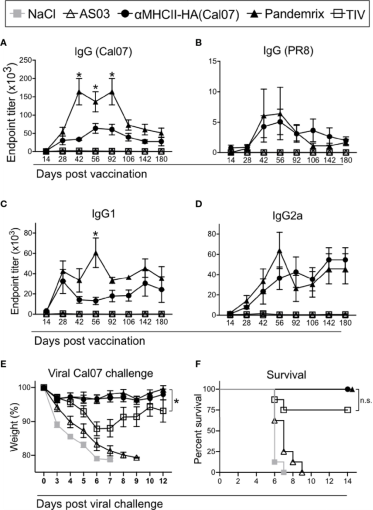 Universal vaccine is an important idea for influenza vaccine development. Bangaru et al [3] found that the antibody FluA-20 can enter the stable trimeric HA region of influenza protein and divide it, so that the virus cannot spread between cells (as shown in Figure 3).

HA and NA proteins play a key role in drug discovery and development.

HA protein mediates the fusion of influenza virus and host cell membrane, NA protein promotes the release of mature virus particles, and enzymes involved in the responsibility and transcription of viral RNA are all targets for antiviral drug development.

he use of recombinant proteins for pharmacodynamic analysis or screening is a commonly used technology in drug development. The Korea Institute of Chemical Technology [4] used the influenza NA protein of Yiqiao Shenzhou to conduct ceramidase inhibition experiments, and obtained ideal research results.

Figure 4. Recombinant NP proteins that can be used to screen antibodies for influenza detection in diagnostic feedstocks.

From the above cases, we can see that in influenza virus-related vaccines, drugs and even diagnostic reagents, key target proteins have played a significant role. We also summarized the HA, NA, and NP just mentioned for you. Several influenza virus research key protein information to help you better understand and apply. (As shown in Table 1) 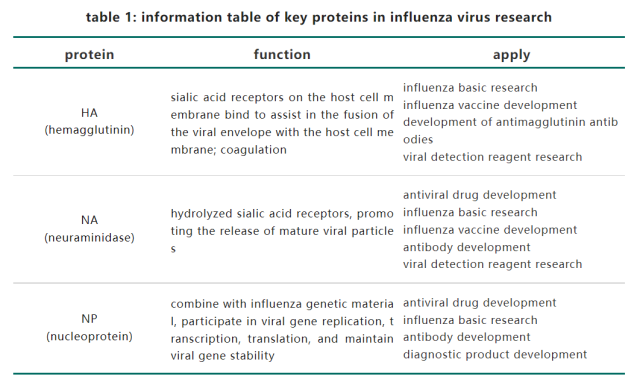 WHO announced the composition of influenza vaccine strains in 2022-2023.