On December 10, 2021, Moderna announced that its Phase 1 clinical trial of the influenza vaccine mRNA-1010 has obtained positive interim data.

The test results showed that in young adults and elderly people, 29 days after vaccination with mRNA-1010 candidate vaccine, the level of antibodies against all virus strains was increased.

The epidemic of seasonal flu causes respiratory diseases and places a huge burden on the healthcare system.

According to WHO estimates, there are approximately 3 million to 5 million severe cases of influenza worldwide each year, and approximately 290,000 to 650,000 influenza-related respiratory disease deaths occur.

However, the current influenza vaccines are only about 40-60% effective, and their formulations were decided 6-9 months before the planned use of the vaccine.

In addition, most of the licensed flu vaccines use egg-based culture technology, which may allow the vaccine virus to produce unexpected antigenic changes.

No significant dose dependence was observed, which means that lower dose vaccines may be explored. 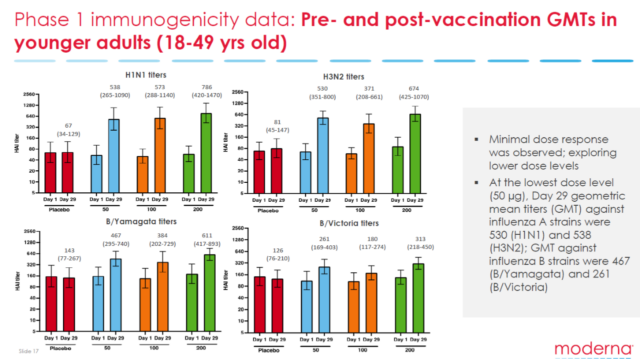 In terms of safety, no serious safety signals were observed. At higher doses, more adverse reactions (AR) were reported in the young group.

The most common local AR in the two age groups included pain and axillary swelling/tenderness, and the most common systemic AR included fatigue, arthralgia, myalgia, and headache.

Mr. Stéphane Bancel, CEO of Moderna, said: “About 3 million people die from respiratory infections every year, and many more people are hospitalized or sick.

At Moderna, our goal is to develop a new coronavirus + influenza virus + respiratory tract A single-dose booster vaccine for syncytial virus (RSV).

The positive interim results of the phase 1 clinical trial of our quadrivalent influenza vaccine candidate mRNA-1010 are an important milestone in achieving this goal.”