Over the past decade, oncology has opened up due to the development and approval of innovative therapies such as immunotherapy drugs (such as nivolumab and pembrolizumab) and targeted therapy drugs (such as osimertinib and alectinib) A new era of therapy, known as the “Golden Age of Oncology”.

Despite the unexpected difficulties brought about by the global outbreak in early 2020, the FDA still approved more new cancer drugs in 2020 than in 2019, and several cancer drugs are approved by the FDA every month.

Osimertinib showed more significant efficacy than erlotinib/gefitinib as the first-line therapy for EGFR-mutant NSCLC in the FLAURA study, so it replaced these drugs as the clinical drug of choice.

Avelumab was approved by the FDA as first-line platinum-based chemotherapy without progression after demonstrating a more significant OS benefit than BSC alone in the JAVELIN Bladder 100 study maintenance therapy in patients with locally advanced or metastatic urothelial carcinoma.

Market competition is one of the most critical factors leading to lower drug prices.

We want to focus on how many oncology drugs are approved for already competitive indications and the potential for eventual price reductions; how many drugs prolong patient survival but are not necessarily competitive in the marketplace.

There is currently little literature on the classification of drugs according to their potential to promote competition and ultimately lead to lower drug prices.

Academics at the University of California, USA, sought to investigate how many newly approved cancer drugs have replaced the existing standard of care, rather than simply being an alternative to second-line, adjuvant or maintenance therapy.

On March 15, they published the results of this retrospective, cross-sectional study in JAMA Network Open, JAMA’s emerging journal.

The study evaluates cancer drugs approved by the FDA between May 1, 2016 and May 31, 2021, based on New Drug Approval Notices for Solid Tumors/Hematological Malignancies published on the FDA’s official website.

All clinical trials based on FDA approval decisions during this period were reviewed, and control regimens were evaluated against NCCN guidelines to determine whether the drug replaced previous standard of care.

From May 1, 2016 to May 31, 2021, the FDA approved a total of 207 solid tumor/hematological malignancies drugs. Of these, 28 (14%) were first-line replacement drugs that replaced previously approved cancer therapies and were considered standard of care for the corresponding indication; 32 (15%) were first-line options and were approved for first-line treatment , but will not replace the existing standard of care; 61 drugs (29%) are complementary treatments, approved in addition to previously approved treatments or approved for maintenance and adjuvant therapy; finally, 86 treatments (42 %) are approved as supplementary later-line therapy for second-, third-, or second-line therapy. 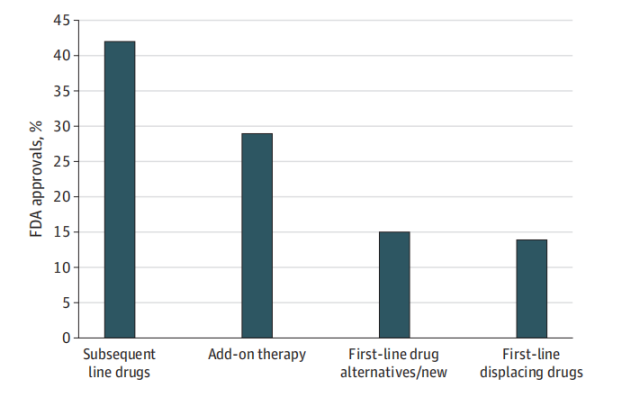 Notably, the number of FDA-approved drugs varies across tumor types. Lung cancer drugs are the most common (37 kinds), followed by urogenital system tumors (28 kinds), leukemia (25 kinds) and other common tumors.

There are several cancers with only 1 drug approved that do not fall into any of these categories, including anaplastic thyroid carcinoma, myelodysplastic syndrome, mesothelioma, giant cell tumor of the tendon sheath, Erdheim-Chester disease (ECD) and Blastic plasmacytoid dendritic cell tumor (BPDCN). 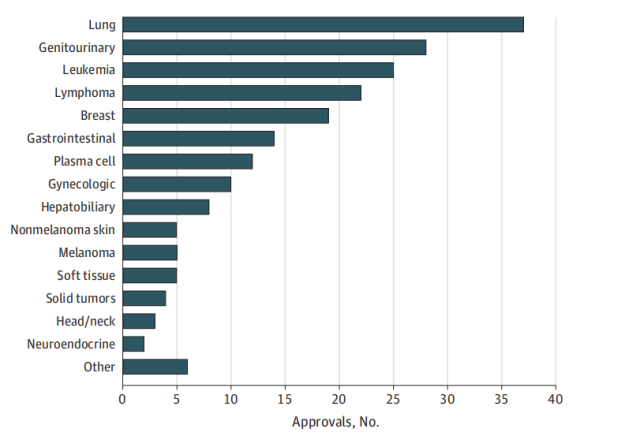 Of course, this study also has some limitations. Some drugs may replace the second- and third-line standard of care, but they were not included in this study.

For example, avelumab for first-line maintenance therapy in urothelial carcinoma may replace the use of second-line immunotherapy.

Overall, in this cross-sectional study, it can be seen that the vast majority of approved oncology drugs are for second-line, third-line, or beyond, which may benefit patients with few alternatives, but It also increases treatment costs and further delays palliative care and comfort services.

Fewer than 1 in 7 newly approved drugs are competitive enough to replace existing standard of care.

Only 1 in 6 drugs are approved as alternative first-line treatment options or first-in-class drugs, both of which have the potential to provide strong competition and work to reduce cancer drug prices in the pharmaceutical market.

However, practical examples based on price competition are rare in actual clinical practice in the United States.

There are also a small number of new treatments or new therapies (eg entrectinib and larotrectinib) that do not replace any existing therapies, but because they are of great significance to patients for whom there is no satisfactory alternative treatment, they become viable new treatments in the second line and beyond. therapy.

It is well worth considering how to implement further incentives to maximize effective competition in the cancer drug field.