In December 2013, Professor David Sinclair of Harvard Medical School published the research results in the world authoritative magazine “Cell” that “after using NMN to increase the content of NAD+ in cells for one week, the lifespan of mice was extended by 30%” , for the first time publicly confirmed that NAD+ precursor NMN can reverse aging and prolong lifespan.

This research caused a sensation in the world, and since then it has opened up a situation where NMN is the leader in the field of aging inhibition and aging intervention.

Up to now, the three international authoritative journals “Nature”, “Science” and “Cell” have published more than 100 reports on NMN and its metabolite NAD+, showing that NMN can delay aging, repair DNA damage, regulate metabolism, and protect the heart. significant effects in other fields.

On April 23, 2021, “Science” released the results of the world’s first human clinical trial of NMN, which further confirmed the safety and effectiveness of NMN on the human body and became a milestone in the new era of human anti-aging. 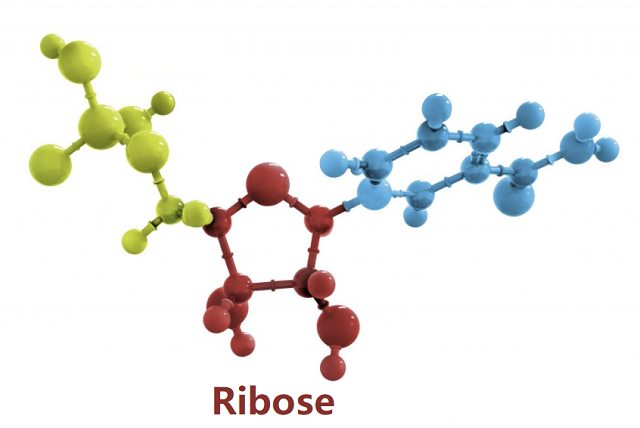 Chapter 1: The Ins and Outs of NMN 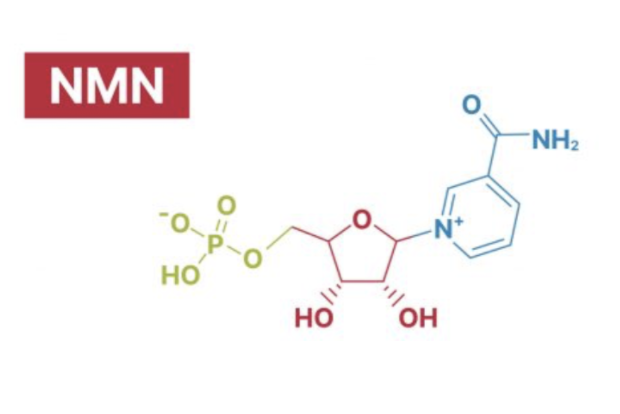 The human body is composed of about 40 trillion cells, in which various biochemical reactions take place all the time to maintain the normal operation of the cells and the human body.

NAD+ is one of the most important and widely used coenzymes in the human body, and it is also the most abundant molecule in the body except water.

When NAD+ functions as a coenzyme in mitochondria, it can participate in energy metabolism processes, such as the common tricarboxylic acid cycle, which requires less NAD+.

When NAD+ is involved in DNA repair, it becomes a consumable, and factors such as aging and environmental radiation can cause accumulation of DNA damage, resulting in a decrease in intracellular NAD+ concentration.

NAD+ can also activate a group of Sirtuins called “longevity proteins” and regulate their gene expression, thereby reducing the occurrence of disease and delaying aging. However, as David Sinclair said: “As we age, the concentration of NAD+ in the human body will gradually decrease, and the resulting decrease in the activity of longevity proteins is the main cause of human disease in the aging process.” Therefore, in aging Naturally increasing intracellular NAD+ levels during the process may slow or reverse certain aging processes.

NMN can be directly converted into NAD+ (nicotinamide adenine dinucleotide) and is more easily absorbed and utilized by cells. Therefore, NMN supplements have become the first choice for increasing NAD+ levels in the body.

Chapter 2: Why should we care about NAD+?

Since the discovery of NAD+ in 1906, the molecule has attracted the attention of scientists because of its abundance in the human body and its key role in sustaining life. In animal studies, increasing NAD+ levels in vivo has been shown to improve metabolic and age-related diseases (such as diabetes, cardiovascular disease, neurodegenerative diseases, and decreased immune function), and has demonstrated anti-aging properties.

Scientists have been searching for a safe and effective treatment for the 2019 novel coronavirus pneumonia (COVID-19) that has swept across cities, infecting millions of people around the world.

In view of the greater harm of the virus to the elderly, some scientists engaged in geriatrics research said that exploring from the perspective of anti-aging may be a long-term way to reduce the damage to the health of the elderly from COVID-19 and other infectious diseases that may appear in the future. effective solution.

Although more research needs to be done to confirm this notion, a recent study has identified NAD+ supplements like NMN as one of the potential treatments. Scientists also suggest that older adults may benefit from NAD+’s longevity effects and protection from cytokine storms, in which the immune system is overactivated to attack its own healthy cells, leading to multiple organ failure, shock and even death.

A recent study, not yet peer-reviewed, shows that NAD+ is essential for the body’s innate viral immune defense system, depleting NAD+ in the body in the process of fighting the virus, which may be the root cause of various COVID-19 pneumonia symptoms . Therefore, researchers are trying to assess whether applying NAD+ can help humans overcome the COVID-19 pandemic.

Robert Huizenga, MD of Harvard University, and Cedars Sinai, the top hospital in the United States, jointly released a report that they applied NMN cocktail therapy to the treatment of severe patients with COVID-19 pneumonia, which not only calmed the cytokines caused by the new coronavirus storm, and reduced the patient’s fever and inflammation levels within 12 hours.

During the COVID-19 pandemic, NMN has received increasing attention for its role in maintaining the balance of the immune system, which may be a potential treatment for the cytokine storm caused by the novel coronavirus. Initial clinical trials have confirmed the positive efficacy and safety of NAD+ on COVID-19. Although a complete cure cannot be guaranteed, many scientists and doctors believe that the impact of NAD+ on COVID-19 deserves further study, and NAD+ is expected to become a feasible and effective treatment.

NAD+ is one of the keys to maintain mitochondrial function and stabilize energy output. Both aging and a high-fat diet lead to a decrease in NAD+ levels in the body, and application of NAD+ supplementation can alleviate diet- and aging-induced weight gain in mice and improve exercise capacity in mice.

In another study, NAD+ reversed diabetes symptoms in female mice, showing the great potential of NAD+ as a new strategy for treating metabolic disorders such as obesity.

In mice with Alzheimer’s disease, boosting NAD+ levels reduced the buildup of the brain’s white matter that disrupts cell signaling and enhanced cognitive function. Raising NAD+ levels also protects brain cells from dying when there is a lack of blood supply to the brain.

⑥NAD+ can protect the immune system

With age, the body’s immune system functions weaken, resulting in a higher incidence of disease and a longer recovery period.

A recent study showed that NAD+ levels play an important role in regulating inflammatory responses and cell survival during immune response and aging, suggesting that NAD+ has the potential to be a treatment for immune dysfunction.

Chapter 3: Production, Transformation and Utilization of NAD+ and NMN in Human Body

How is NAD+ produced in the human body?

Among them, NMN is one of the components of the final step of the NAD+ synthesis process (as shown in Figure 2). Therefore, NMN is also called the direct precursor of NAD+ (that is, one-step realization of NAD+ synthesis). 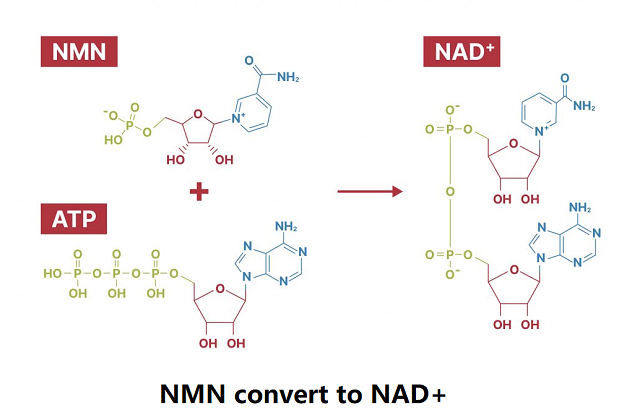 All of these precursors can be obtained through food. Among them, NAM, NA and NR are all transformed forms of vitamin B3. Once they enter the body, cells synthesize NAD+ through several different transformation pathways.

The first pathway is called the de novo pathway. De novo is a Latin word meaning “from scratch”. This pathway begins with the NAD+ precursor tryptophan, and is then gradually converted to NAD+.

The second pathway is called the Salvage pathway. This pathway is similar to recycling in that it is converted to NAD+ from the products of NAD+ degradation. In fact, all proteins in the body need to be degraded regularly to prevent their excessive accumulation and damage to health.

As part of the synthesis and degradation cycle, under the action of enzymes, the degradation products of NAD+ are converted into NAD+ for re-degradation and re-synthesis.

How to increase the level of NAD+ in the body?

Although NAD+ is present in some foods, due to its low content, it is not enough to affect intracellular NAD+ concentration through diet alone. Taking NMN supplements has been shown to be a direct and effective way to increase NAD+ levels.

Why choose NMN as an NAD+ supplement?

Therefore, the availability of NAD+ must be improved by supplementing NAD+ precursor molecules. NMN is easier to absorb and utilize than NAD+. The best choice for increasing intracellular NAD+ concentration.

Studies have shown that taking NMN can increase the concentration of NAD+ in multiple parts of the body, including heart, kidney, liver, pancreas, testis, adipose tissue, skeletal muscle, eyes and blood vessels, etc., and the absorption and utilization efficiency of NMN is very high.

After 15 minutes of oral administration of NMN , the NAD+ level in the mouse liver can be significantly increased (Figure 3). 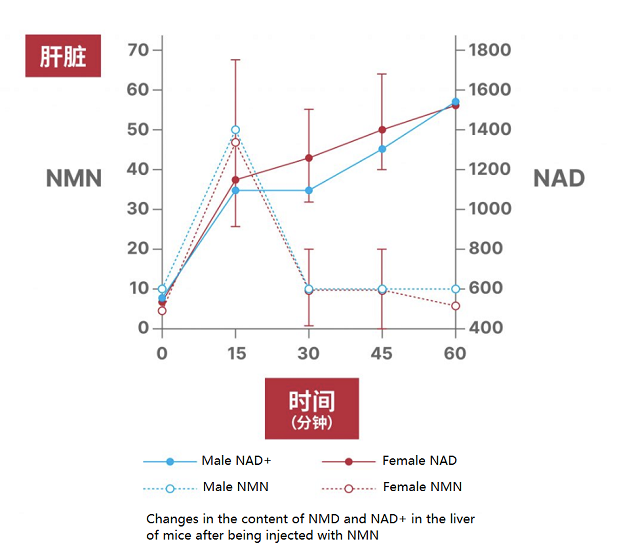 Safety and Side Effects of NMN Supplements

In animal experiments, NMN has shown good safety, and human clinical trials of NMN are gradually being carried out.

And, based on the current findings, NMN is largely safe and nontoxic, even in high concentrations in mice and human trials.

In addition, long-term (one-year) oral administration of NMN in mice did not show toxic effects, and the first human clinical trial also confirmed that a single dose of NMN supplements had no toxic effects.

A study of Japanese men published in November 2019 noted that subjects who took NMN had slightly elevated blood bilirubin levels, but remained within the normal range.

Therefore, future research will continue to focus on the long-term safety and efficacy of NMN. NMN is not associated with any other known side effects.

Chapter 4: History of NMN and NAD+

In 1906, Arthur Harden and William John Young discovered a “factor” in brewer’s yeast extract liquid that facilitated the fermentation of sugars into alcohol. This “factor”, then called “coenzyme”, turned out to be NAD+.

Together with Hans von Euler-Chelpin, Arthur Harden continues to delve into the mystery of fermentation. In 1929, they won the Nobel Prize for their insight into these processes, including the discovery of the chemical shape and properties of the molecule soon known as NAD+.

In 1937, Conrad Elvehjem and his colleagues at the University of Wisconsin, Madison discovered that supplementation with NAD+ could cure pellagra, also known as “black tongue” in dogs. In humans, pellagra causes a range of symptoms, including diarrhea, dementia, and mouth sores.

In the 1940s and 1950s, Arthur Kornberg’s research on NAD+ helped him discover the principles behind DNA replication and RNA transcription, two biological processes essential to life.

In 1958, Jack Preiss and Philip Handler discovered three biochemical steps for the conversion of niacin to NAD+. This series of steps is now known as the Preiss-Handler pathway.

In 1963, Chambon, Weill and Mandel reported that NAD+ provided the energy needed to activate important ribozymes, a discovery that provided the DNA repair enzyme PARP (PARP has a key role in repairing DNA damage and regulating cell death, and its activity changes are related to Lifespan changes are associated.) A series of research findings laid the cornerstone.

In 1976, Rechsteiner and his colleagues discovered that in addition to its classical biochemical role as an energy transfer molecule, NAD+ appears to have several other important functions in mammalian cells.

Since then, there has been growing interest in NAD+ and its NAD+ precursors, such as NMN, for their potential to improve many age-related health problems.

The future of NMN

NMN has shown a good effect of delaying aging and improving age-related diseases in animal experiments. Its role and function may be more than that.

Currently, more and more studies and human trials are underway, which will reveal the truth for us.

The mystery of NMN promotes the progress of human anti-aging research.