The Omicron BA.2.12.1 variant, which accounts for nearly 60% of the cases in New York, USA, has entered South Korea. On May 3, the Korea Centers for Disease Control and Prevention (KDCA) stated that the BA.2.12.1 mutant strain was detected in infected persons entering overseas.

The infected person was a woman in her 50s who entered South Korea from the United States on April 16 and was diagnosed with COVID-19 pneumonia the day after her entry. The patient has received 3 doses of the COVID-19 vaccine.

According to the CDC, there is some early evidence that BA.2.12.1 is spreading faster than the Omicron variant. Omicron is considered to be the most contagious new coronavirus variant strain to date, and BA.2.12.1 is the fastest spreading among the many Omicron sub-variants. BA.2.12.1 is the next generation of the BA.2 mutant strain.

There is currently no evidence that BA.2.12.1 causes more severe symptoms than its various sub-variants of the original Omicron strain.

Previously, South Korea eased strict epidemic prevention measures and lifted the requirement to wear masks outdoors. However, the government made it clear that the measure of wearing masks indoors will continue.

South Korean health authorities said they would remain vigilant after confirming the first case of the Omicron BA.2.12.1 variant. The Korea Centers for Disease Control and Prevention (KDCA) also stated that they have also detected 1 case each of the BA.1 and BA.2 recombinant viruses “XE” and “XM” recently, and the two were diagnosed on April 9 and April 17, respectively.

It is worth noting that Singapore, another Asian country that had previously relaxed epidemic prevention, also recently reported two community cases of the Omicron BA.2.12.1 variant strain.

Starting from April 26, Singapore lifted the limit on the number of people in dine-in and social gatherings, allowing all employees to return to work at the workplace, and immigrants no longer need to show nucleic acid test reports.

However, Singapore’s Ministry of Health Wang Yikang warned that if the country is hit by the new mutant strain, it may tighten its epidemic prevention policy again.

The BA.2.12.1 variant attracted attention because of its strong upward momentum in the United States. Driven by Omicron’s new mutant strain BA.2.12.1, New York, located in the northeastern United States, is becoming a hotspot of the epidemic. California, at the western gateway to the U.S., has also started to see a surge in cases.

Driven by the new mutant strain, the number of COVID-19 infections in the United States has entered a rising period.

The reason why BA.2.12.1 has attracted much attention lies in the mutation of the L452Q site on its spike protein. The spike protein is the “key” for the new coronavirus to enter human cells.

L452 is the key mutation site of the Delta mutant strain. L452 gives Delta the advantage of transmission and immune escape, while the original Omicron strain does not have this mutation.

According to the preliminary data of pseudovirus and mouse model, infection with the original strain of Omicron is basically unable to provide cross-immunity to BA.4 and BA.5, and infection with the mutant BA. 4 and BA.5 also offer relatively limited protection.

This concern also manifests itself in the real world. After a large number of people in South Africa have experienced several rounds of COVID-19 virus infections, driven by the BA.4 and BA.5 variants of Omicron, the country has begun to experience a fifth wave of epidemics. 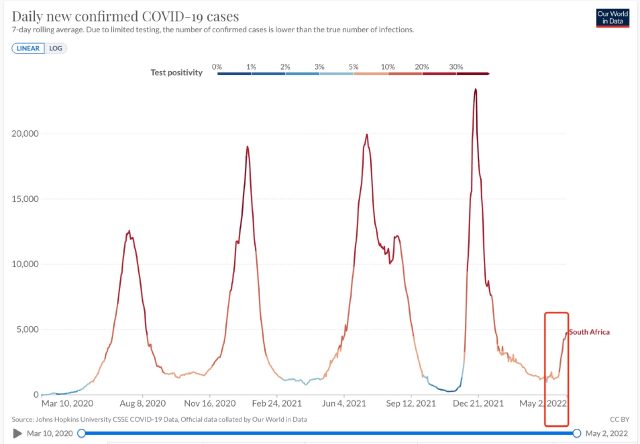 More than 90% of South Africa’s population is already somewhat immune, given vaccinations and Covid-19 infections, but recent infection rates in South Africa have not been reported, said Tulio de Oliveira, a virologist at the University of KwaZulu-Natal. A surge, 70% of patients were infected with BA.4 or BA.5.

A study by the African Institute of Health in South Africa showed that BA.4 and BA.5 variants reduced the neutralizing antibody titer of serum samples from patients who had been infected with the original strain of Omicron by nearly 88%, and vaccinated patients Internal antibodies decreased by 67%.

Tulio de Oliveira said that BA.4 and BA.5 lead to reinfection in recovered patients and breakthrough infections in vaccine recipients.