The CRISPR/Cas system provides bacteria with adaptive immunity, while its ability to accurately recognize and cut specific DNA and RNA sequences provides a powerful tool for genome editing in plants, animals, and microorganisms.

At present, a number of clinical trials based on CRISPR-Cas9 gene editing have also been initiated and achieved breakthrough results, opening up new avenues for the treatment of many genetic diseases.

Emmanuelle Charpentier of the Max Planck Institute for Etiology in Germany and Jennifer Doudna of the University of California, Berkeley, also won the 2020 Nobel Prize in Chemistry for developing this most important genome editing method.

In recent years, CRISPR/Cas-related research has also made great progress, and many of them have discovered a family of Cas proteins including RuvC, called Cas12 , whose variants exhibit different biochemical and cellular activities.

Among them, Cas12c was originally found in small DNA fragments in the gut metagenome. Although it shares features with other DNA-cutting Cas12 enzymes, some biochemical properties of this protein are still unknown: for example, its RNA recognition and processing mechanisms are not yet known;

furthermore, whether or how Cas12c provides antiviral protection to bacteria remains an open question due to the lack of detectable DNase activity.

This study found that Cas12c is an RNA-guided DNA-binding enzyme that does not cleave target DNA, but binds to target DNA through crRNA-mediated interactions, and can protect bacteria from phage infection by recognizing phage-essential genes.

To confirm whether Cas12c has a series of enzymatic activities that play a role in immune protection, they first reconstituted Cas12c and explored it in more detail.

It was found that, unlike other Cas enzymes that can directly bind to the proximal or interior of the repeat, the Cas12c cleavage protein binds the pre-crRNA 17 nucleotides downstream of the repeat .

Next, they tested the ability of Cas12c to cleave DNA/RNA with a variety of substrates, and found that Cas12c was unable to cleave these substrates complementary to the guide RNA. 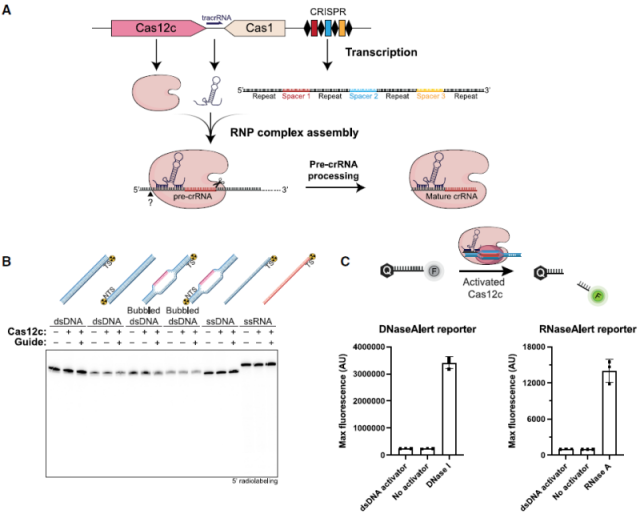 The researchers then speculated that the RuvC nuclease domain of Cas12c is the site that performs pre-crRNA processing.

However, follow-up more in-depth experimental results also showed that the role of RuvC domain in Cas12c is only the processing of pre-crRNA. 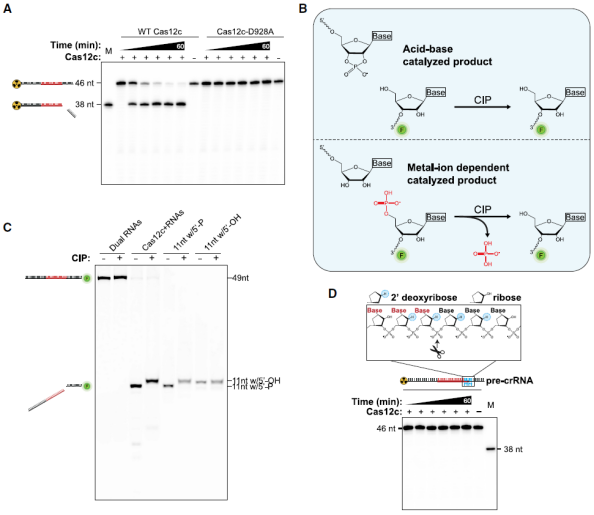 The above experiments have demonstrated that Cas12c does not cleave target DNA, so can Cas12c bind to complementary substrates guided by RNA? Binding screening experiments showed that Cas12c binds target dsDNA in the low nanomolar range with stronger affinity for partially base-paired DNA.

Thus, these data suggest that, like other Cas12 enzymes and Cas9, Cas12c also has high binding affinity to target ssDNA but no detectable binding to ssRNA .

The pre-crRNA processing activity of Cas12c suggests that crRNA maturation may be critical for target dsDNA binding. To confirm this idea, they tested the DNA-binding affinity of Cas12c mediated by pre-crRNA or mature crRNA.

It was found that wild-type Cas12c binds target dsDNA with similar affinity in each case; however, Cas12c binding to dsDNA was significantly attenuated when the pre-crRNA contained a thiosalt that prevented Cas12c catalyzing the process.

Thus, these results suggest that pre-crRNA processing is required for the function of the CRISPR-Cas12c system, without which Cas12c cannot efficiently bind target dsDNA . 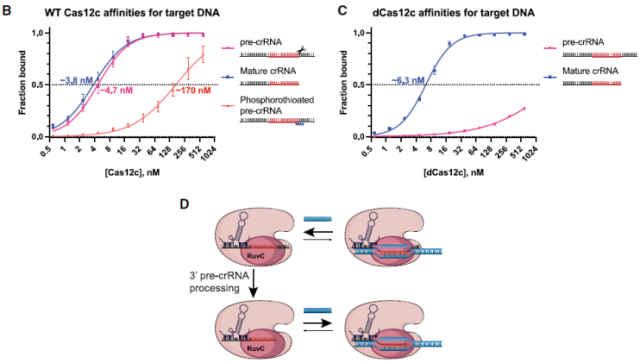 Previous studies have found that Cas12c can target genes essential for survival in bacteria, which may be due to Cas12c-mediated cleavage of genomic targets in vivo, or Cas12c may mediate transcriptional silencing by targeting polymerase blockade reactions.

Chromosomal breakage by Cas12c-directed cleavage is toxic to E. coli; in contrast, if Cas12c binds but does not cleave target DNA, loss of the gene-targeting fluorophore is observed without cell death.

Therefore, these results are also consistent with the above-mentioned biochemical data that Cas12c is binding but not cleaving target DNA . 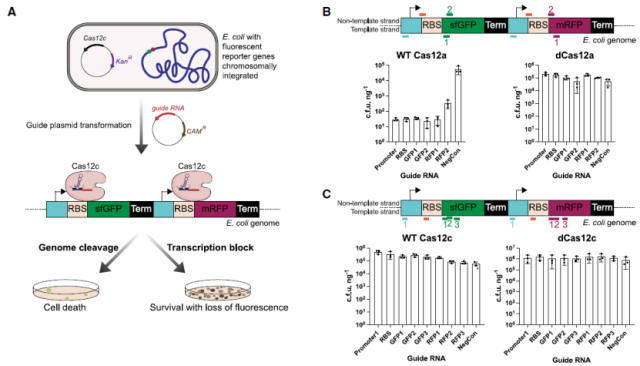 In nature, CRISPR-Cas systems are thought to protect prokaryotes from viral infection by RNA-guided cleavage of exogenous nucleic acids, and dsDNase activity is a key function of all known DNA-targeting CRISPR systems.

However, Cas12c has no detectable DNase activity, so could it also provide anti-phage immune protection based solely on targeted DNA binding?

They used phage plaque experiments to answer this question. As expected, they did observe that wild-type Cas12c had antiphage activity independent of DNA strand targeting . 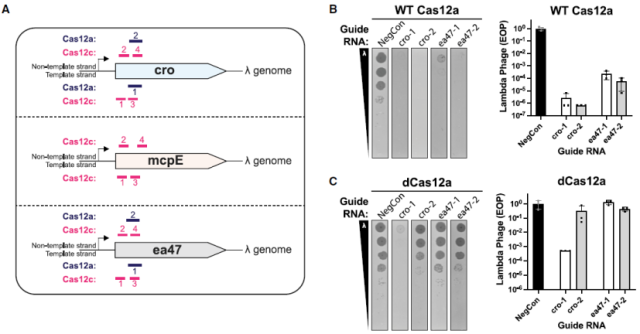 Interestingly, the results for RuvC-inactivated dCas12c were similar to those for wild-type Cas12c, suggesting that phage defense occurs independently of RuvC activity . 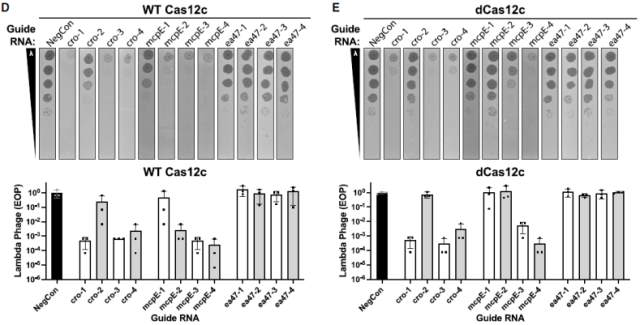 In the evolution of microorganisms, CRISPR-Cas enzymes provide immunity to microorganisms by degrading foreign nucleic acids, which can protect bacteria from viruses.

In this study, Jennifer Doudna ‘s team revealed that a recombinant RuvC domain of CRISPR-Cas12c only cleaves precrRNA, not target DNA, to accomplish antiviral interference without chemically attacking invaders .

In addition, they found that the RuvC domain of Cas12c only catalyzes the maturation of pre-crRNA to mediate the binding of Cas12c to the target DNA for transcriptional repression.

At the same time, this natural DNase-free Cas12c enzyme can protect bacteria from phage infection when targeting phage essential genes.

Taken together, these results suggest that the CRISPR system can provide anti-phage immune protection even in the absence of DNA cleavage activity . 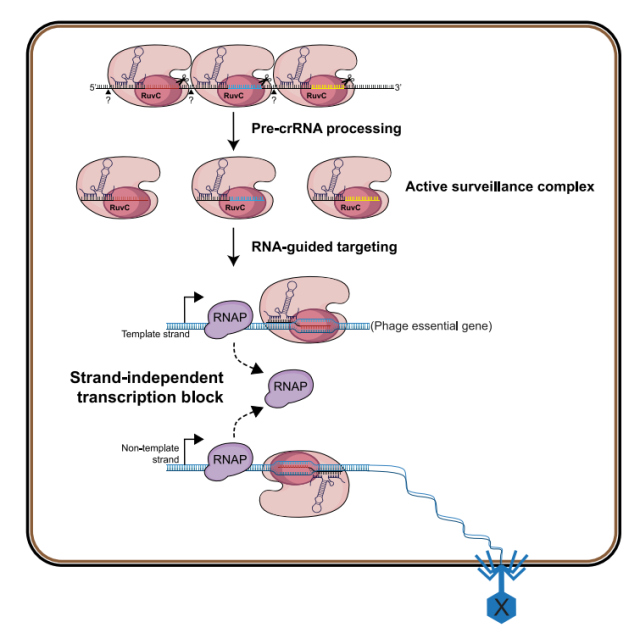