10 years ago, he was known as the ” pioneer of stem cell transplantation ” and ” the first person in the world for tracheal transplantation “, but now, he is convicted for his research that year.

On June 16, 2022, the District Court of Solna, Sweden, convicted Paolo Macchiarini of one count of ” causing bodily harm “, which will be subject to a suspended sentence, but the exact sentence has not yet been decided. Under local law, ” causing bodily harm ” carries a maximum sentence of four years in prison.

A year later, he embarked on the research that made him famous and controversial, in which he planted stem cells isolated from a patient’s own bone marrow into a synthetic trachea, then implanted in the patient, claiming that the stem cells could grow, differentiate and interact with the patient. organizational integration.

From 2011 to 2014, he transplanted this artificial trachea for 8 patients , and published several articles to promote this achievement. He was also known as the ” pioneer of stem cell transplantation ” and ” the first person in the world for “.

In his paper, however, he deliberately concealed the fact that all of the transplanted patients had serious complications.

Seven of them died from serious complications, and one survived because the implanted artificial trachea was surgically removed in time.

The first finding of wrongdoing in 2015 was rejected by Karolinska Institute.

In January 2016, the Karolinska Institute reopened the investigation, and Paolo Macchiarini was expelled two months later .

In 2018, the Karolinska Institute finally published the results of a second investigation that confirmed wrongdoing by Paolo Macchiarini.

In 2017, the Swedish Prosecutor’s Office began charging Paolo Macchiarini with manslaughter in connection with three patients who died after receiving artificial airway transplants in 2011 and 2012. The three are : Andemariam Teklesenbet Beyene (a graduate student from Eritrea with slow-growing cancer that blocks the windpipe) , Christopher Lyles (a 30-year-old American with tracheal cancer) , Yesim Cetir (1 Teenager from Turkey with trachea damage due to surgery) .

But the case was dropped shortly after, citing insufficient evidence. In 2020, Paolo Macchiarini was charged again with aggravated assault and causing bodily harm.

During the trial, Paolo Macchiarini and his lawyers argued that he was simply trying to help critically ill patients who had no other options and whose care and treatment was of a standard.

But other expert witnesses noted that the few patients could have survived with other minor surgeries or treatments, and that each had other non-lethal options, not “no other options.”

On June 16, 2022, the court ruled that the artificial trachea transplant performed by Paolo Macchiarini was ” incompatible with science and proven experience “, but there was no evidence that he was “indifferent” to the harm or pain that the operation might cause.

Therefore, could not be sentenced to serious Injury, and was sentenced to the lesser crime of causing bodily harm.

It is worth mentioning that the operation performed by Paolo Macchiarini is largely based on the research results of Catherine Verfaillie , director of the Stem Cell Institute at KU Leuven in Belgium and an authoritative scientist in stem cell research in the world .

The two have also collaborated on clinical trials of stem cell-based tracheal transplants.

In 2002, Catherine Verfaillie published a paper in Nature describing a type of stem cell derived from bone marrow -pluripotent adult progenitor cells (MAPC) , claiming that this stem cell can grow and differentiate into almost any cell type, which made her famous. Noise, thought to be the basis for induced pluripotent stem cells (iPSCs) that won the Nobel Prize in Physiology or Medicine in 2012 . 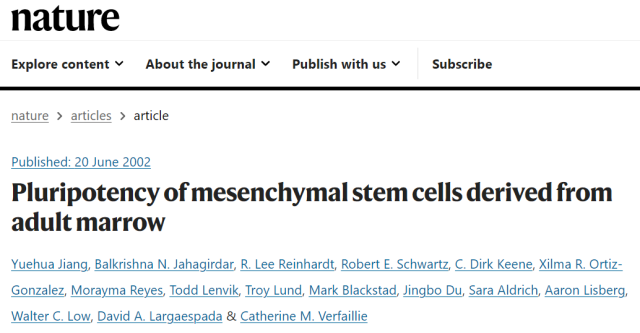