Adoptive transfer of chimeric antigen receptor ( CAR ) T cells is a powerful technique that has revolutionized the way immunotherapy is done.

Its impressive complete and long-term efficacy in refractory and relapsed hematological malignancies also opens up new possibilities for the treatment of solid tumors.

However, the widespread application of cell therapy has been hindered by the inherent limitations of commonly used viral vectors for T cell transfection.

Viral vectors are standardized systems with efficient gene transfer and a long history of use, which have demonstrated safety in adoptive T- cell therapy.

However, the ability of viral vectors to transduce long genes is limited by the capsid.

The viral capsid is about 100 nm in diameter and usually cannot accommodate genes larger than 8-9 kb.

However, with the update and iteration of CAR-T technology, additional activation elements or CARs with different specificities need to be transferred to achieve higher efficacy, safety and applicability.

This high cost, complexity, and need for personalized treatment ultimately impacted the price of CAR-T products, which can run into the hundreds of thousands of dollars per person, daunting the average patient.

Finally, viral vectors carry an inherent risk of immunogenicity caused by humoral and cellular immune responses to vector-encoded epitopes, which may limit the efficacy and persistence of transduced cells.

Nobel laureate geneticist Barbara McClintock first discovered mobile sequences in the genome when she was studying variation in corn kernel color in the 1940s.

These “jumping genes” in maize were then called transposable elements ( TEs ) or transposons.

TEs are divided into two categories, retrotransposons and DNA transposons.

Retrotransposons use RNA intermediates to move through a copy-paste mechanism and represent the most common class of transposons in the human genome.

DNA transposons move through DNA intermediates and are used in gene transfer applications.

Most families of DNA transposons have an element encoding a transposase gene flanked by inverted terminal repeats ( ITRs ).

Transposases recognize and bind elements integrated into ITRs, catalyzing the excision of the transposable element from its original location and its integration into another location in the genome.

Non-viral transposon vectors are versatile, low immunogenic, and easy to produce. However, they are generally less efficient than viruses for transfection.

Non-viral delivery of mRNA is usually achieved by electroporation or nanoparticles.

Once inside the cell and does not need to reach the nucleus, the mRNA is translated into the encoded protein and is usually lost after 2-4 cell divisions, this approach avoids the risk of genotoxicity associated with the integrated vector, making this strategy ideal for CAR-T cells A good way to be safe.

Waking up after a long evolutionary “sleep”, SB , found in the fish genome , became the first transposon to show activity in vertebrate cells, opening new horizons for gene therapy.

Based on canonical Tc1/mariner DNA class II TEs , these ” jumping ” units are able to transfer from one genomic location to another via a cut-and-paste mechanism.

The SB vector consists of two functional components: transposon DNA , which carries the gene of interest flanking the ITR , and the SB transposase, which recognizes the ITR sequence and mobilizes the transgene from the donor DNA to the recipient within the genome site. 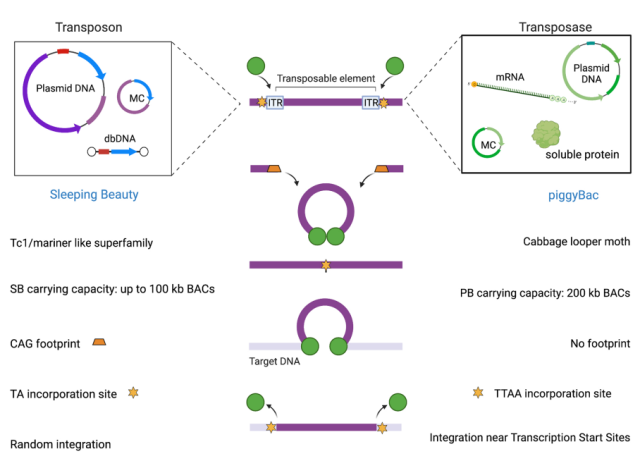 A big advantage of this strategy compared to viral systems is the greater loading capacity. The size of the insert is inversely related to the efficiency of the transposition machinery.

The optimal load size is no higher than 6kb. But its upgraded version includes two complete transposon units, which can increase the load to 11kb, thus expanding the cloning capacity of SB vector-based. Furthermore, when combined with bacterial artificial chromosomes ( BACs ), SBs can deliver up to 100 kb of transgenes in human embryonic stem cells.

In terms of clinical application, Cooper et al.’s team applied SB-engineered anti-CD19 CAR-T cells to clinical trials for the first time, and two clinical trials ( NCT00968760, NCT01497184 ) confirmed that SB-engineered anti-CD19 CAR-T cells were effective in 26 patients with B – Safety of autologous or allogeneic hematopoietic stem cell transplantation ( HSCT ) as adjuvant therapy in patients with ALL and non-Hodgkin’s lymphoma.

In addition, there are currently ongoing CAR-T studies using the SB platform in the United States and Europe.

The UltraCAR-T platform is based on a non-viral system to deliver multiple genes through SB vectors.

Using this platform, autologous cells of CD33 CAR and mbIL15 ( PRGN-3006 ) are being used for the treatment of r/r acute myeloid leukemia and high-risk myelodysplastic syndromes Signs ( MDS ).

Like the SB vector, the PB system consists of a PB transposase ( PBase ) in the form of mRNA or DNA, and a separate transfection plasmid carrying the desired gene.

The design of the PB transposon vector features a single open reading frame ( ORF ) flanked by ITRs that have a characteristic asymmetry in the PB.

The transposase recognizes the ITRs flanking the transposon and integrates the transgene into the genomic DNA through a cut-and-paste mechanism. PB has higher transposon-mobilizing transposition activity than SB in mammalian cells, has a larger loading capacity ( up to 14 kb ) than viral vectors, and allows multiple transgene delivery by designing polycistronic cassettes.

Currently, more and more preclinical data support the feasibility and safety of the PB-based CAR-T manufacturing platform, which enables the system to enter clinical trials.

The CARTELL trial in Australia is a Phase I clinical study ( ACTRN12617001579381 ) to investigate the efficacy and safety of donor-derived anti-CD19 CAR-T cells obtained through the PB transposon system.

Additionally, two Phase I studies in Japan ( UMIN000030984 ) and China ( NCT04289220 ), respectively, are investigating the feasibility and safety of anti-CD19 CAR-T cells made using the PB system. In the Japanese study, no patient has shown dose-limiting toxicity so far.

Although transposon-engineered CAR-T cells are all in the initial stages of clinical trials, some have already shown some clinical efficacy.

The anti-BCMA CAR-T cells ( P-BCMA-101 ) were designed through the PB platform, and in order to improve transposition, the manufacturing process was changed during the study, including the use of nanoparticles, to reduce the backbone size and bring the ITRs closer together.

90 patients with R/R MM were treated with P-BCMA-101, and early results showed an overall response rate ( ORR ) of 57% with initial dose escalation and an ORR of 73% in combination with rituximab, with very high toxicity low ( NCT03288493 ).

More than 30 years ago, Malone ‘s groundbreaking research showed that RNA mixed with lipids could be taken up by human cells and translated into proteins from them.

Since then, RNA has been used in various aspects of genetic engineering, such as restoring functional expression of mutated genes, knocking out genes to silence expression, modifying cellular phenotypes or encoding antigens. Successful expression of proteins from RNA depends on its stability and translation efficiency.

These features are determined by cis-acting elements such as the 5′ cap structure, the polyA tail, the composition of the coding sequence, and possibly non-coding regions at the 5′ and 3′ ends of the molecule. 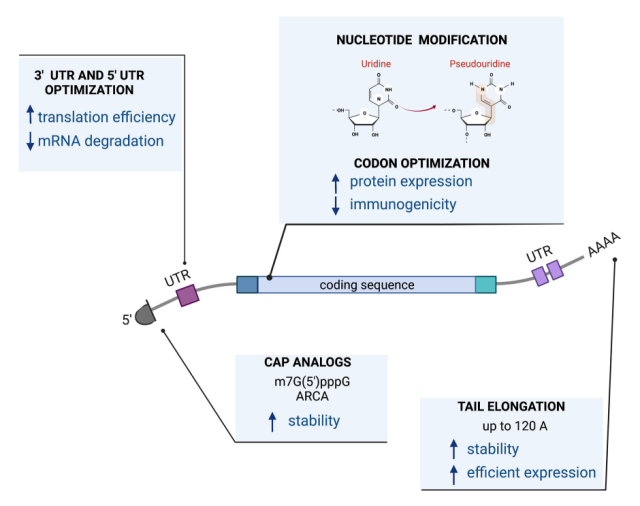 RNA is suitable for a variety of cell transfection methods, including electroporation, cationic lipids, and cationic polymers.

There have been numerous in vitro and in vivo preclinical studies introducing CAR into T cells via mRNA for testing in model systems for hematological and solid tumors.

While mRNA-based therapies have been shown to reduce on-target effects, reduce toxicity, and alleviate integration-related safety concerns, the transient nature of protein expression is also a disadvantage in these applications.

Another method of genetic modification of lymphocytes is to transfect the transgene of interest in the form of DNA together with RNA encoding the transposase.

Encoding the transposase in mRNA form has several advantages when co-transduced into target cells with a DNA vector encoding the gene of interest.

First, the transient nature of transposase expression reduces the incidence of secondary transposition events caused by transposon re-excision and re-integration; second, this approach allows precise titration of the ratio of SB mRNA to CAR DNA for durable integration .

The potential safety advantage of transiently expressing CAR from mRNA may provide lower toxicity in hematological and solid tumor settings.

Hematological malignancies targeting CD123 and CD19 and solid tumors targeting mesothelin and c-Met have been tested in clinical studies.

Although existing studies have reported that mRNA-based CAR-T cells are safe and generally have no serious adverse events, a common denominator is the need for repeated administration of 3-6 high doses.

The need for multiple infusions of high doses of mRNA CAR-T cells is likely related to the lack of transgenic cell persistence designed to prolong the duration of in vivo activity in these patients, but repeated dosing may lead to other complications.

To meet future challenges, besides transposon platforms, another non-viral tool for genetic engineering is nanocarriers, and the use of nanocarriers is emerging as a possible solution to overcome current barriers in gene delivery, such as toxicity and Low transfection efficiency.

Among the latest advances in nanotechnology, one of the most cutting-edge discoveries, Bozza et al. have developed a non-integrating DNA nanocarrier capable of generating CAR-T cells that are active both in vitro and in vivo.

The platform is free of viral components and enables additional chromosomal replication in the nucleus of dividing cells, maintaining continuous transgene expression without the need for integration.

In addition, it has all the advantages of non-viral vectors: non-immunogenic, simple, versatile and inexpensive to produce.

On the other hand, progress is being made through the use of developed novel biomaterials to improve the isolation, activation and genetic modification of CAR-T cells.

An example is the use of synthetic DNA aptamers and complementary reversal technology, allowing the isolation of high purity and high yields of label-free CD8+ T cells from PBMCs.

The biggest advantage of this method is that multiple distinct T cell populations can be isolated in a single isolation step by aptamers with different specificities.

To deliver DNA insertions more efficiently, CRISPR/Cas9 has recently been combined with transposons to increase the efficiency of RNA-guided integration, using transposase-catalyzed integration.

To this end, a research group conducted experiments combining CRISPR/Cas9 with SB transposons, and the results showed that they are suitable for future non-viral clinical applications.

Methods to identify and reduce the risk of genomic rearrangements and translocations could allow further development of potential clinical applications of gene editing in immunotherapy.

However, recurrence, the complexity of the manufacturing process, and the application of these technologies in other diseases, including solid tumors, require more sophisticated design and gene transfer techniques to accommodate these challenges.

To fill these gaps, non-viral technologies are making continuous progress, and it is certain that the future will soon see more applications of them in CAR-T cell therapy.