The mechanism by which vitamin D inhibits the spread of ovarian cancer.

Among various gynecological tumors, ovarian cancer (OvCa) has the highest mortality rate, and most patients have peritoneal metastasis at the time of diagnosis [1].

Because the ovary is directly exposed to the abdominal cavity, unlike other tumors that tend to metastasize to solid organs such as the lung and liver, OvCa rarely metastasizes through the blood and is more prone to peritoneal metastasis [2].

OvCa can be widely metastasized in the peritoneum, omentum, mesentery, etc. It is difficult to completely remove the tumor by surgery, and the treatment effect is poor.

At present, the clinic mainly relies on chemotherapy drugs such as cisplatin and paclitaxel to achieve complete remission.

Although the development of targeted drugs in recent years has prolonged the progression-free survival of patients, these drugs are still limited in prolonging the overall survival [3-4], and there is still a lack of effective treatments for peritoneal metastasis of OvCa.

Some studies suggest that the control of peritoneal metastasis may play an important role in improving OvCa refractory.

After OvCa cells shed from the primary site, they are carried to the peritoneal wall, mesentery, and omentum through ascites.

Normally, these sites are covered by mesothelial cells (MCs), which protect the internal organs from pathogens and tumor cells [6].

Many studies have shown that MCs have cancer-promoting effects in the tumor microenvironment .

Cancer-associated fibroblasts (CAFs) are the most numerous cells in the tumor stroma and can produce various factors that promote tumor cell growth.

In a previous study, the research team confirmed the presence of many MC-derived CAFs in the OvCa matrix of peritoneal metastases [7].

Combined with the results of previous studies, the research team believes that inhibiting the activity of CAMs may contribute to the treatment of OvCa.

Studies have shown that vitamin D can not only play a key role in maintaining calcium homeostasis and regulating bone metabolism, but also inhibit cell cycle, proliferation and angiogenesis [ 8].

Furthermore, overexpression of vitamin D receptor (VDR) has been shown to be associated with good prognosis in various cancers [9].

Therefore, the research team speculates that vitamin D can play an anti-tumor effect by inhibiting the EMT of MCs, thereby treating peritoneal metastasis. 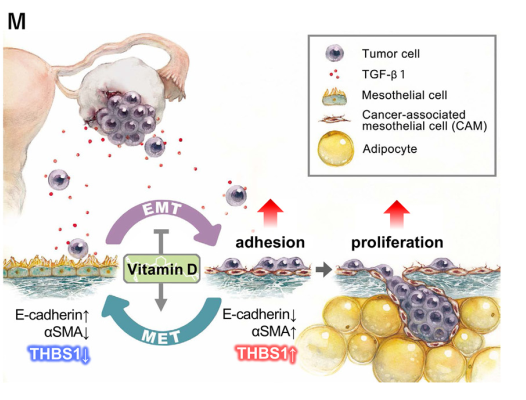 First, the research team performed immunohistochemistry (IHC) on calretinin, a specific marker of MCs , to determine the location of MCs metastases in the greater omentum.

The results showed that MCs were present on the peritoneal surface and in areas where tumor cells infiltrated the greater omentum, but no MCs were observed in the primary site of OvCa .

The research team then examined the expression of VDR in MCs and CAMs, and found that MCs arranged on the surface of the greater omentum were VDR-positive, and there were also many VDR-positive MCs in the stroma of omental metastases . 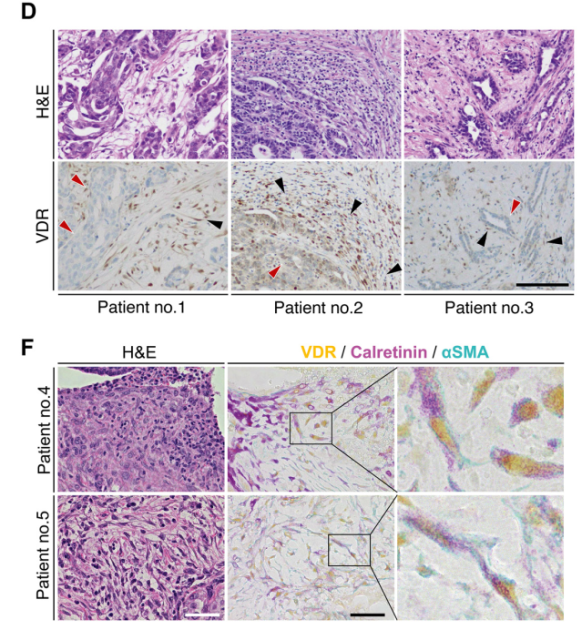 VDR-positive fibroblasts from MCs are seen in OvCa peritoneal metastases

The research team also analyzed data in public databases and found that VDR expression level is an important prognostic factor for OvCa.

Furthermore, VDR expression was higher in stromal cells than in tumor cells.

These results suggest that high expression of VDR in the stroma, including MCs, is associated with better prognosis in patients with OvCa .

Previous studies have demonstrated that malignant ascites of OvCa induces EMT in MCs, and TGF-β1 is the main inducer of EMT in MCs.

The research team explored the effect of vitamin D on MCs in the presence of TGF-β1.

Vitamin D can also alleviate TGF-β1 stimulation-induced increases in the levels of EMT markers, such as N-cadherin, MMP2, MMP9, and Slug, among others.

These data suggest that vitamin D attenuates TGF-β1-induced EMT in MCs by altering the morphology and expression of EMT markers .

Next, the research team performed RNA sequencing and analysis of MCs in different treatment groups, and found that vitamin D intervention downregulated the expression of EMT and focal adhesion-related genes .

Among them , the expression of thrombospondin -1 (THBS1) was highly up-regulated (27.90-fold) in TGF-β1-stimulated MCs, and was most significantly down-regulated after vitamin D intervention.

After verifying the changes in THBS1 expression by qRT-PCR, the research team analyzed the expression of THBS1 in OvCa patients.

Vitamin D downregulates the expression of THBS1, a key protein that promotes adhesion

To test this hypothesis, the team further investigated the effect of vitamin D on the adhesion of OvCa cells to MCs.

Next, the research team investigated the molecular mechanism of vitamin D-mediated inhibition of THBS1.

DNA binding acts as a transcription factor to regulate the expression of target genes. Vitamin D can inhibit the phosphorylation of Smad3 through VDR.

This study shows that VDR competes with Smad3 for binding to the promoter region of THBS1 and inhibits the transcription of THBS1.

The research team also found that after vitamin D treatment, MCs returned to an epithelioid state, with increased levels of E-cadherin and decreased expression of actin stress fibers and THBS1 in MCs.

Even in the presence of tumor cells, vitamin D induced MET in MCs in the mesenchymal state and normalized THBS1 expression . 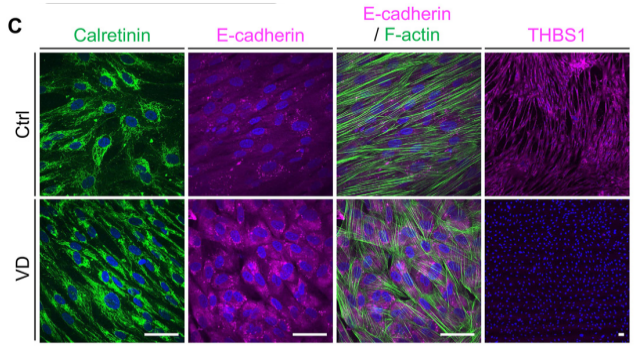 Finally, the research team validated these results in a mouse model. 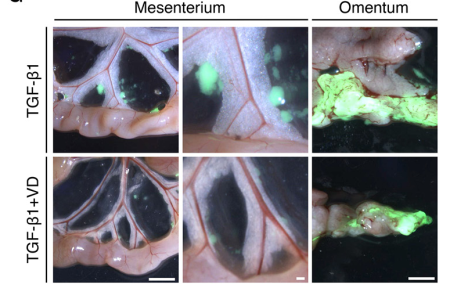 In conclusion, this study highlights that MCs are a key determinant of OvCa peritoneal metastasis, finds that vitamin D suppresses tumorigenesis by inhibiting the mesenchymal state of MCs induced by TGF-β1, and establishes that THBS1 is critical for enhancing OvCa cell adhesion and proliferation protein .