Among other things, Moderna said it decided to stop developing mRNA-drug mRNA-6231, which targets IL-2 in autoimmune diseases, due to “early clinical data and an evolving competitive landscape.”

Moderna has not released specific clinical data, but it may be possible to get a glimpse from the changes in the experimental information registered in the Clinical Trial: From December 2021 to May 2022, Moderna reduced the expected trial size from 112 patients to 52 , the number of planned treatment groups was drastically reduced from 16 to 3.

This is the third piece of bad news for Moderna in recent times.

On February 24, 2022, Moderna announced its 2021 financial report, mentioning that Merck has returned all rights to the KRAS-targeting cancer vaccine mRNA-5671.

In May 2018, Merck and Moderna reached a partnership to acquire the latter’s KRAS vaccine mRNA-5671 through a $125 million preferred stock investment.

Before it was announced to be rescinded, the program had advanced to Phase 1 clinical development to treat non-small cell lung cancer, colorectal cancer, and pancreatic cancer.

Just last week (July 29) , AstraZeneca announced its 2022Q2 financial report, announcing that it had abandoned the research and development of AZD8601, a candidate therapy for cardiovascular disease developed in cooperation with Moderna.

The therapy targets VEGF-A and improves cardiac function by locally inducing the expression of the VEGF-A protein, which promotes the regeneration of new blood vessels that innervate areas of the heart muscle that are deficient in blood supply.

The therapy has entered Phase 2a clinical trials, and although it was removed from AstraZeneca’s clinical pipeline, Moderna still lists it in its own company’s R&D pipeline.

IL-2 is a pleiotropic cytokine and a key survival factor for regulatory T cells (Treg) . Because IL-2 has two receptors with different affinities, and these two receptors are expressed differently on different immune cells, it is “two-sided”:

At low doses, IL-2 activates the ability of regulatory T cells (Treg) with immunosuppressive functions , which inhibits the anticancer ability of T cells and may lead to other toxic side effects.

Due to the important role of IL-2 in regulating immune tolerance through regulatory T cells (Treg) , there have been many blockbuster transactions in this field in recent years, with a preliminary estimate of the transaction value exceeding $8.5 billion.

In September 2016, BMS and Nektar entered into a clinical collaboration to jointly develop Opdiv o in combination with the IL-2 agonist Bempegaldesleukin for the treatment of various types of cancer.

BMS paid $1 billion up front and bought $850 million worth of shares in Netkar, with the promise of possible future payments of up to $1.8 billion in milestones.

However, due to poor clinical data, the astronomical $3.6 billion collaboration was terminated in April 2022.

In November 2019, Simcere and GI Innovation announced the joint development and commercialization of a series of innovative drug candidates including GI-101.

These molecules are potentially the world’s first-of-its-kind bispecific fusion proteins targeting CD80-IgG4 Fc-IL2v for the treatment of solid tumors. 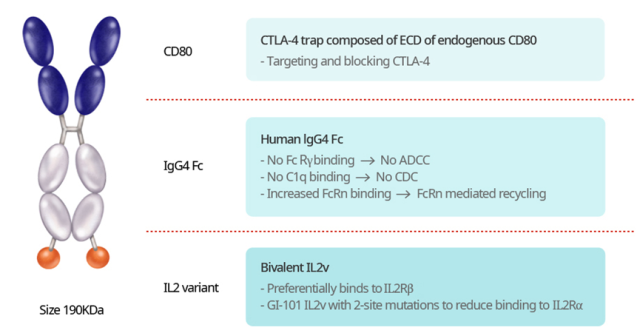 In December 2019, Sanofi announced the acquisition of Synthorx for US$2.5 billion. The core asset of this acquisition is the next-generation IL-2 anticancer drug THOR-707.

The number of NK cells and NK cells increased and continued to increase throughout the dosing cycle, with a dose escalation effect; this effect was more pronounced when used in combination with K drugs.

In March 2020, Alopexx Oncology entered into an exclusive license agreement with Shenguoji Pharmaceuticals to develop and commercialize DI-Leu16-IL2 in China and the rest of Asia.

On February 25, 2021, Merck announced the acquisition of Pandion Therapeutics for US$1.85 billion. This acquisition will allow Merck to obtain a series of experimental drugs for a variety of autoimmune diseases, of which the core projects are IL-2 mutant PT101 and PD- 1 Agonist PT627.

In May 2022, AbbVie and Cugene Inc. announced an exclusive worldwide license option agreement for CUG252 and other novel IL-2 muteins.

CUG252, a potentially best-in-class Treg-selective IL-2 mutant protein for the treatment of autoimmune and inflammatory diseases, is currently in Phase 1 studies and Cugene will receive an upfront payment of $48.5 million.

However, due to the short half-life of IL-2, high-dose administration is required, resulting in a small therapeutic window and high toxicity, and its clinical use is severely limited.