Dementia is an umbrella term used to describe neurodegenerative diseases that cause cognitive dysfunction, among other things.

An estimated 36.5 million people worldwide suffered from dementia in 2010, with a prevalence of 5 to 7 percent in people aged 60 and over in most regions, and this number is increasing, doubling every 20 years [1] ].

Researchers have been actively exploring the risk factors associated with dementia. In addition to carrying risk genes, lifestyle and other factors, there is also a strong link between hormone expression levels and cognitive impairment .

Recently, a research team published the latest research results in the journal Neruology [2], exploring the correlation between dementia and thyroid disease.

The study provided tertiary evidence that a history of hypothyroidism was associated with an increased risk of dementia in patients 65 years of age and older. 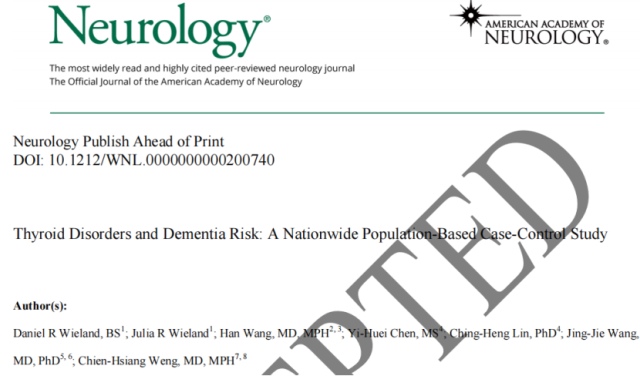 Most thyroid diseases are autoimmune diseases, and in recent decades, people have gradually begun to pay attention to the health effects of thyroid hormones T3 and T4, as well as the nutritional thyroid-stimulating hormone.

With the rapid aging of some countries’s population, the prevalence of dementia is also gradually increasing, so it is very necessary to conduct further research.

To determine the relationship between a history of hyperthyroidism or hypothyroidism and the risk of developing dementia, researchers designed this population-based case-control study using the Taiwan Medical Insurance Database (NHIRD).

A total of 7843 dementia patients were included in the final study after excluding patients <18 years old, >120 years old, dead, diagnosed with syphilis, HIV and other infectious diseases or mental illnesses before the diagnosis of dementia . 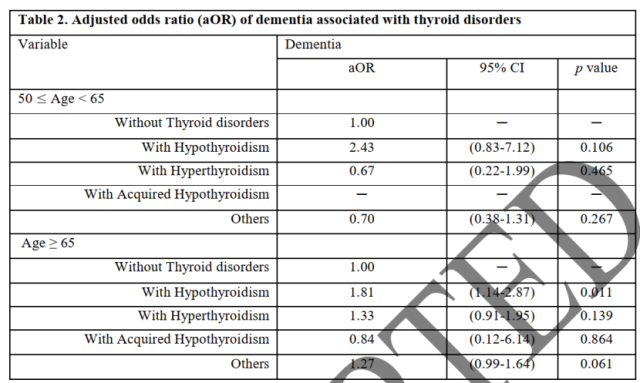 In addition, the incidence of hypertension, diabetes, coronary artery disease, depression, and alcohol dependence in the case group was also significantly higher than that in the control group, which are known risk factors for dementia.

The association between the history of hypothyroidism and the risk of dementia was not significant (aOR 2.43, p=0.106) .

At the same time, the association between hyperthyroidism and acquired hypothyroidism and the risk of dementia was not statistically significant in people aged 50 and over. 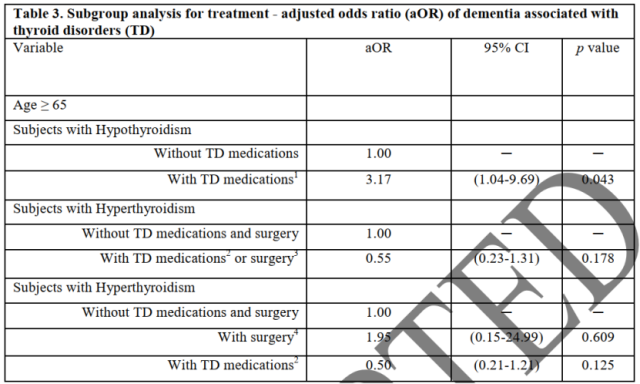 In a subgroup analysis of people 65 years of age and older, hypothyroidism with drug treatment was associated with a 217% increased risk of dementia compared with drug- naïve patients (aOR 3.17) . According to the researchers’ analysis, these patients may have more obvious symptoms of hypothyroidism.

Previous studies on the relationship between thyroid disease and dementia have mostly focused on non-East Asian populations.

This is the first case-control study in a Taiwanese population , which will help us to further study the link between thyroid disease and dementia.

However, due to database limitations, researchers cannot know the severity of the disease and the exact time of disease progression, and specific clinical data are also lacking.

Considering the conflicting results of multiple studies on the association of thyroid hormones with dementia, the researchers believe that more carefully designed prospective longitudinal cohort studies should be conducted to elucidate the underlying mechanisms and relationships in order to better manage patients.