Coffee is the most popular beverage worldwide. 80% of adults drink at least one caffeinated beverage every day. According to statistics, the world’s annual coffee consumption exceeds 9 billion kilograms.

Coffee contains a lot of caffeine, so many people drink coffee to refresh and improve work efficiency. Considering that coffee consumption is so common, it is necessary to understand any potential health effects of coffee. Does the consumption of coffee have a safe value, which will affect health if it exceeds a certain safe value?

Although coffee is refreshing and even has many potential health benefits, this large-scale study shows that drinking too much coffee every day will drag us down, especially affecting brain health.

The research team conducted a prospective analysis of the habitual coffee consumption of 398,646 UK Biobank participants (37-73 years old), of which 17,702 participants had magnetic resonance imaging (MRI) data. The research team used covariate-adjusted linear regression to examine the association between their coffee consumption and brain volume, and logistic regression to examine the probability of dementia (4333 events) and stroke (6181 events). 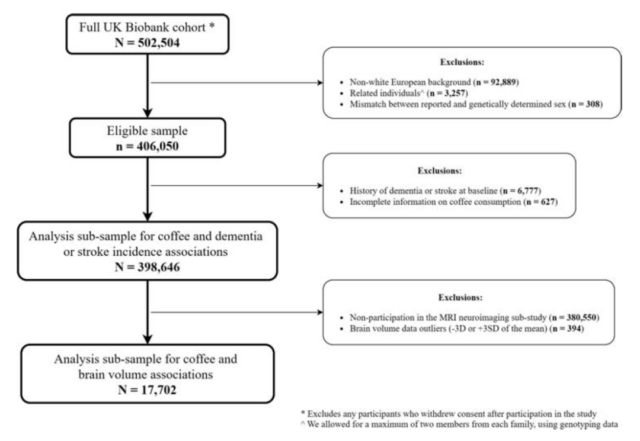 It is understood that this is the most extensive investigation of the link between coffee, brain volume, dementia risk and stroke risk, and the largest study considering brain volume imaging data and a wide range of confounding factors.

Data from this study showed that higher coffee intake was significantly associated with decreased brain capacity. Compared with people who drink 1-2 cups of coffee a day, drinking more than 6 cups of coffee a day increased the risk of dementia by 53%.

Dementia is a degenerative brain disease that affects memory, thinking, behavior, and ability to perform daily tasks. Approximately 50 million people worldwide have been diagnosed with dementia. With the intensification of an aging society, the number of cases of dementia will continue to increase.

Stroke is a condition in which the blood supply to the brain is interrupted, leading to hypoxia, brain damage and loss of function. Globally, one in four adults over the age of 25 will have a stroke in their lifetime. Statistics show that there will be 13.7 million strokes this year, of which 5.5 million will die.

Stroke, also called stroke, is a condition in which the blood supply to the brain is interrupted, which can lead to hypoxia, brain damage, loss of function and even death. Globally, one in four adults over the age of 25 will experience a stroke in their lifetime. Statistics show that more than 13 million people have a stroke each year, and 5.5 million of them die as a result.

Professor Elina Hyppönen, the corresponding author of the study and director of the Precision Health Center of the University of South Australia, said that this large-scale study provides important insights about the relationship between large amounts of coffee and brain health. This finding may not be an issue for coffee lovers. Good news, but like many things in our lives, life is too late, and moderation is the key.