Major depressive disorder (MDD) is one of the leading causes of disability worldwide, yet it is difficult to cure with medication.

It is a disorder caused by stress from negative life events that can occur at a very young age, and memory of earlier events can also be a factor in developing major depression in adulthood.

Unfortunately, the currently available antidepressant drugs only provide complete remission in about one-third of patients and cannot meet the needs of patients who do not respond to drug therapy.

While the economic burden of long-term treatment of depression is substantial, we urgently need a new approach to understand the heterogeneity of the clinical phenotype of depression.

In September 2022, the FDA-approved SAINT neuromodulation system will come, which may break the existing deadlock in depression treatment.

Depression affects more than 260 million people worldwide, about half of them have mental health problems that start before the age of 14, and suicide is the fourth leading cause of death for young people aged 15-29.

In the first year of the pandemic alone, depression and anxiety disorders increased by more than 25%.

In the world, nearly 20% of people are eroded by major depressive disorder (MDD). They endure unimaginable pain and criticism from the world.

Currently available antidepressant drugs can only completely relieve about one-third of patients with severe depression, and even have adverse side effects that are not visible in the short term, which makes the treatment of patients with depression even more difficult.

If depression is difficult to treat with medication, can a psychotherapy approach change the patient’s fate?

In the global depression patient population, almost half of depressed patients suffer from treatment-resistant depression.

What does that mean? It is basically useless to take medicine, and conventional treatment methods are difficult to be effective.

For patients with this condition, the U.S. Food and Drug Administration (FDA) has approved a therapy, intermittent burst stimulation (iTBS), for treatment-resistant depression, but this method is not effective , and there is a limitation that the duration of treatment lasts 6 weeks.

Magnus Medical researchers say they have designed SAINT as a personalized, fast-acting, non-invasive neurostimulation platform that can be used to treat people with major depressive disorder who are unable to recover from antidepressants People who have benefited from medication or other treatments.

This also means that SAINT has a wider range of application scenarios, and it has the potential to become a reproducible, rapid and efficient treatment for severe treatment-resistant depression.

It was noticed by the FDA as early as October 2021, when it received FDA breakthrough certification and Magnus raised $25 million for it.

What is the so-valued SAINT neuromodulation system? What does the company behind it, Magnus Medical, do?

In 2020, Magnus Medical was established, which hopes to provide a new treatment for patients with major depressive disorder by combining advanced imaging technology, personalized targeting technology, and novel neurostimulation modalities. 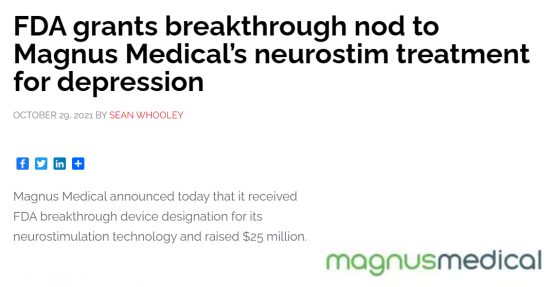 SAINT has the characteristics of rapid action and non-invasiveness.

Combining advanced imaging techniques, personalized targeting, and novel neural stimulation modalities, SAINT can perform structural localization and functional-level MRI imaging of cranial nerves through the use of breakthrough algorithms to determine the risk of neurostimulation in patients with major depressive disorder. best target.

Magnus Medical expects a commercial launch for SAINT in 2023, allowing the SAINT system to help more early of patients with major depressive disorder.

The groundbreaking effect of SAINT

How effective is SAINT? To this end, researchers conducted a double-blind randomized controlled trial, the results of which were published in The American Journal of Psychiatry on October 29, 2021, titled “Stanford Neuromodulation Therapy (SNT): A Double-Blind Randomized Controlled Trial”.

For the study, researchers conducted a randomized, double-blind trial in patients with treatment-resistant depression who were currently experiencing moderate-to-severe depressive episodes and were randomly assigned to receive SAINT treatment (active treatment group), one group was the control group, and the primary endpoint was the Montgomery-Osberg Depression Rating Scale (MADRS) score after 4 weeks of treatment.

Results of the trial showed that 79% of people in the active treatment group went into remission from depression.

This compares to just 13 percent in the control group. The new “individualized” neurostimulation offers a new option for treating depression, Magnus Medical said in a press release.

Approval of the SAINT Neuromodulation System is just the first step for the company, and their clinical research program will continue to provide additional insights into how personalized neuromodulation can restore healthy neural activity in a variety of mental health conditions.

SAINT may open up a new situation in depression treatment

“Magnus Medical’s SAINT technology is groundbreaking and could help many patients with major depression who do not respond to antidepressant therapy.”

That’s what Dr. Alan Schatzberg, a professor of psychiatry and behavioral sciences at Stanford University and past president of the American Psychiatric Association, said about SAINT, adding, “In a paper published in the American Journal of Psychiatry In the double-blind randomized controlled trial of SAINT, the therapeutic effect observed with SAINT treatment was striking, very rapid, and its effect was sustained throughout the study follow-up period.”

Shatzberg believes that the technology could lead to a fundamental change in the treatment of treatment-resistant major depressive disorder and potentially reduce morbidity and mortality associated with the disease, which is something to look forward to.

6. Statement by the Director-General of WHO at the Seventy-fifth World Health Assembly on 23 May 2022 (who.int)