Caplyta is a first-of-its-kind drug that has been approved to treat schizophrenia, and its sales in 2026 will reach US$2 billion!

Recently, the company announced that FDA  has approved Caplyta (lumateperone) for a new indication: as a monotherapy and as an adjuvant therapy with lithium or valproate for the treatment of adult patients Treat depressive episodes associated with bipolar type I or type II disorder (bipolar depression ).

It is worth mentioning that Caplyta is the only drug approved by the US FDA as a monotherapy and as a lithium or valproate adjuvant therapy for the treatment of depressive episodes associated with bipolar I or II disorders in adults .

Caplyta was approved by the US FDA in December 2019 for the treatment of adult patients with schizophrenia .

In terms of medication, the recommended dose of Caplyta is 42 mg, once a day, taken with food, no dose titration is required. It should be noted that Caplyta’s drug label contains a black box warning that: patients with dementia-related psychosis use antipsychotic drugs to increase the risk of death; Caplyta is not approved for the treatment of patients with dementia-related psychosis.

The approval of the new indication is based on the positive results of two phase 3 placebo-controlled bipolar depression studies.

These studies evaluated the effect of Caplyta as a monotherapy (Study 404), as a lithium or valproate adjuvant therapy (Study 402) on depressive episodes in adults with bipolar I or bipolar II disorder.

In these studies, the efficacy of Caplyta 42mg was determined by demonstrating a statistically significant improvement in the Montgomery-Asperger Depression Rating Scale (MADRS) total score compared to baseline at the 6th week of treatment.

In addition, Caplyta shows good tolerability and safety, which is consistent with the results of previous clinical studies on schizophrenia .

The most common adverse reactions (incidence ≥5% and at least twice that of placebo) are drowsiness/sedation, dizziness, nausea, and dry mouth. The Caplyta group and the placebo group had similar changes in body weight, fasting blood glucose, total cholesterol, triglycerides, and low-density lipoprotein cholesterol to the baseline. 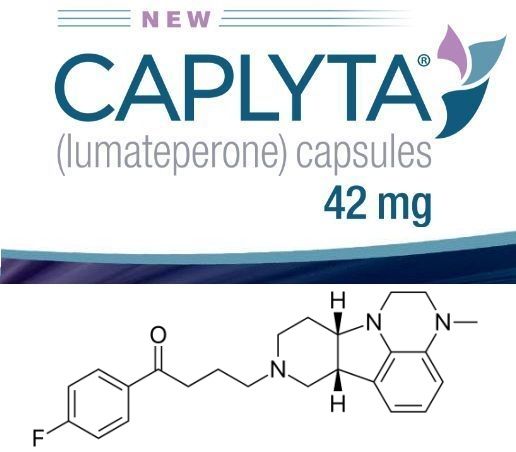 They are characterized by recurrent mania or hypomania mixed with bipolar disorder. Depressive major depressive episode.

These depressive episodes tend to last longer, relapse more frequently, and have a worse prognosis than manic/hypomanic episodes.

Bipolar depression is still a severely inadequate medical need, and only a few FDA- approved therapies are available. These therapies are usually related to tolerability issues.

The active pharmaceutical ingredient of Caplyta is lumateperone, which is a first-in-class small molecule drug that can selectively and simultaneously modulate serotonin, dopamine and glutamate, the three neurotransmitters involved in severe mental illness. Qualitative pathway.

Pharmacodynamic studies have shown that lumateperone, as a potent antagonist, has high binding affinity on the 5-HT2A receptor, as an antagonist, has a moderate binding affinity on the post-synaptic D2 receptor, and as a kind of Serotonin transporter (SERT) reuptake inhibitors have moderate affinity for D1 receptors (this may contribute to the indirect activation of AMPA and NMDA receptors).

These receptors are thought to play an important role in schizophrenia, bipolar disorder, depression, and other neuropsychiatric diseases.

In vitro studies have shown that compared with D2 receptors, lumateperone has an affinity for 5-HT2A receptors about 60 times higher.

In the United States, the FDA granted lumateperone fast track status for the treatment of schizophrenia in November 2017. In addition to schizophrenia, ICT companies are also developing lumateperone to treat bipolar depression, depression, and other neuropsychiatric and neurological diseases.

The industry is very optimistic about Caplyta’s prospects. EvaluatePharma, a pharmaceutical market research organization, predicts that Caplyta’s sales will reach US$2 billion in 2026, half of which will come from schizophrenia and the other half will come from bipolar depression .