Cyano groups are very common in drug discovery. At present, more than 50 different cyano-containing small molecule drugs have been developed.

In classic medicinal chemistry, cyano groups are generally considered to be the biological electrons of carbonyl, hydroxyl, carboxyl and halogen atoms. Isometric body.

However, there is a lack of in-depth understanding of the structure and energy properties of cyano groups in protein receptor-ligand interactions.

The Huang Niu research group of the Beijing Institute of Life Sciences investigated the Protein Data Bank and ChEMBL database in 2018, reviewed the protein receptor-interaction with nitrogen-containing compound ligands, and discussed the cyano group’s ability to improve the affinity of the compound with the target. Various roles.

Approximately 2.4% of the 2,327 marketed small molecule drugs included in the DrugBank database contain cyano functional groups. The best-selling drugs containing cyano include escitalopram, verapamil, and ripavirin (Figure A below).

The author analyzed the ChEMBL database 1961 on the compound by MMP (matched molecular pair) method, and evaluated the effect of cyano substitution on the biological activity of the compound (Figure B below). 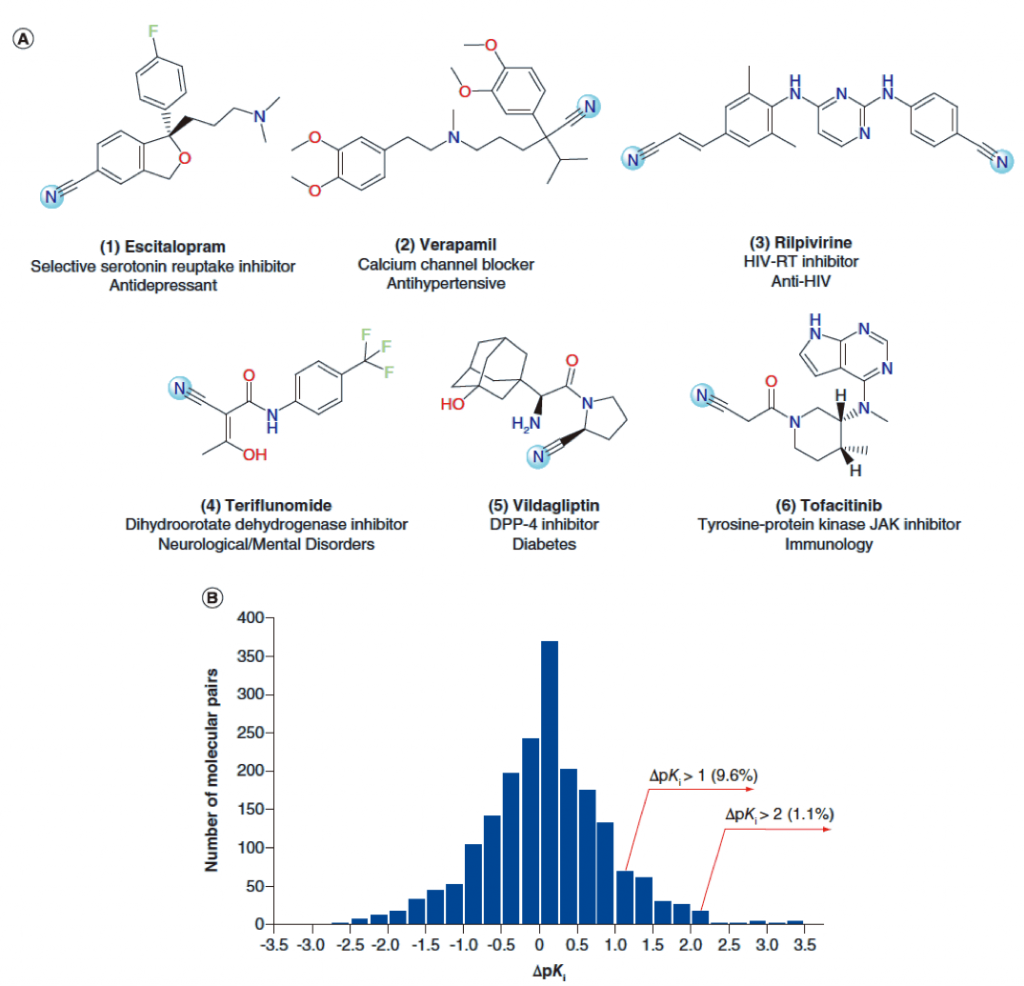 The author further analyzed the PDB (2018/5) database and retrieved a total of 949 cyano-containing eutectic compounds, including 751 cyano-containing small molecule compounds. Summarize the three main types of interactions in which cyano groups participate in the above figure (below): 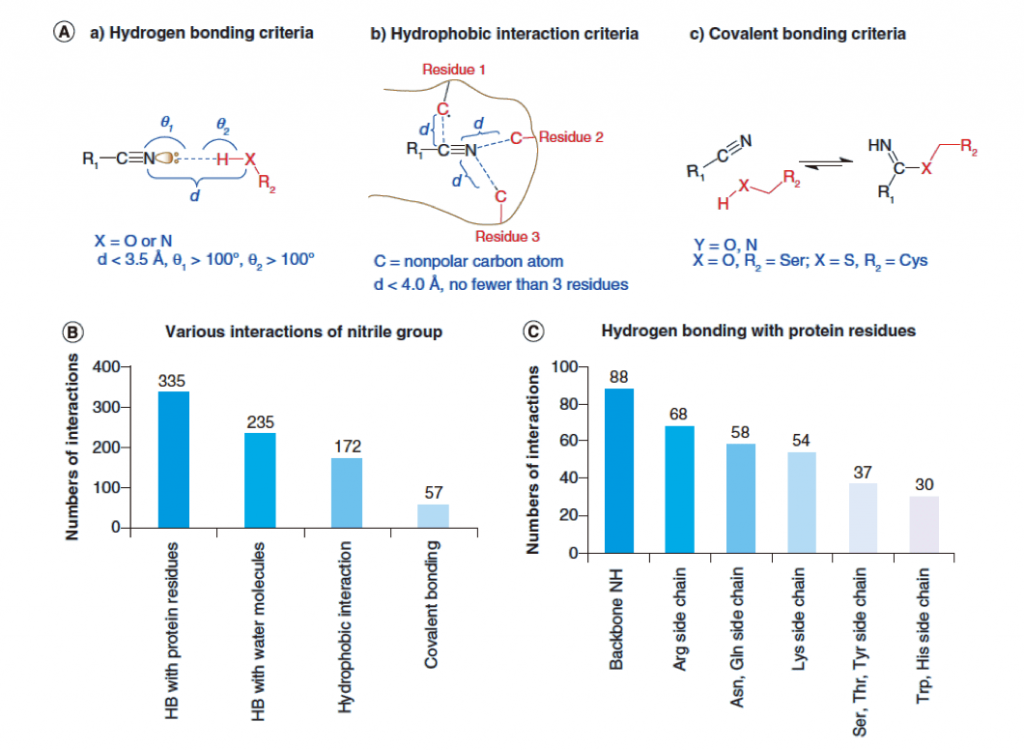 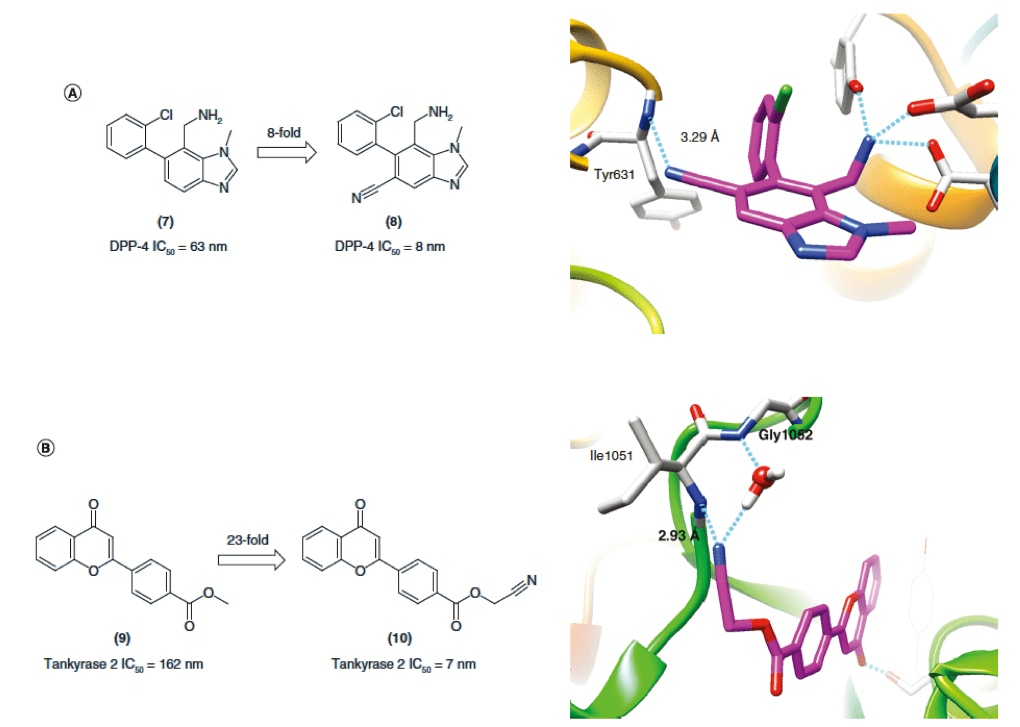 The cyano group interacts with the NHs group.

(A) On the left, the cyano group in the DPP-4 inhibitor replaces the H group to enhance the binding affinity; on the right, the eutectic structure of 8 is combined with DPP-4.

(B) In the left picture, in tankyrase inhibitors, the binding affinity of the cyano group is increased after the H group is substituted; the right picture is the co-crystal structure of 10 bound totankyrase 2.

The cyan dotted line indicates the hydrogen bond. The text in the figure below does not introduce too much. It can be seen that the English introduction below the picture is similar in general to this one (enhanced activity). 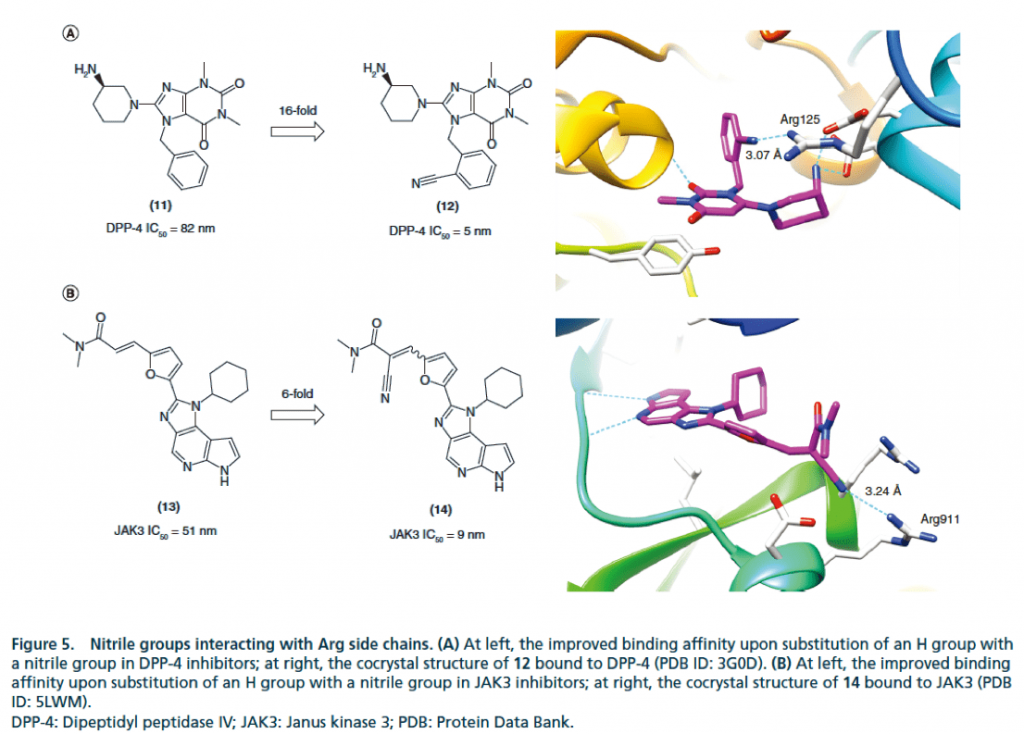 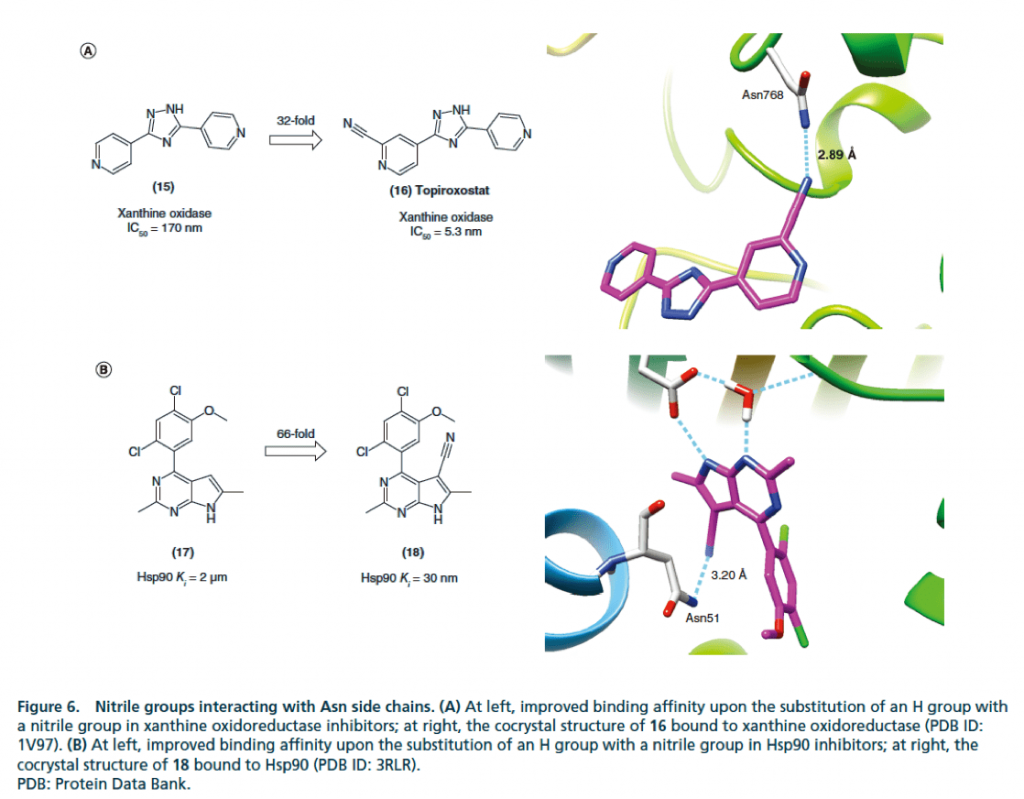 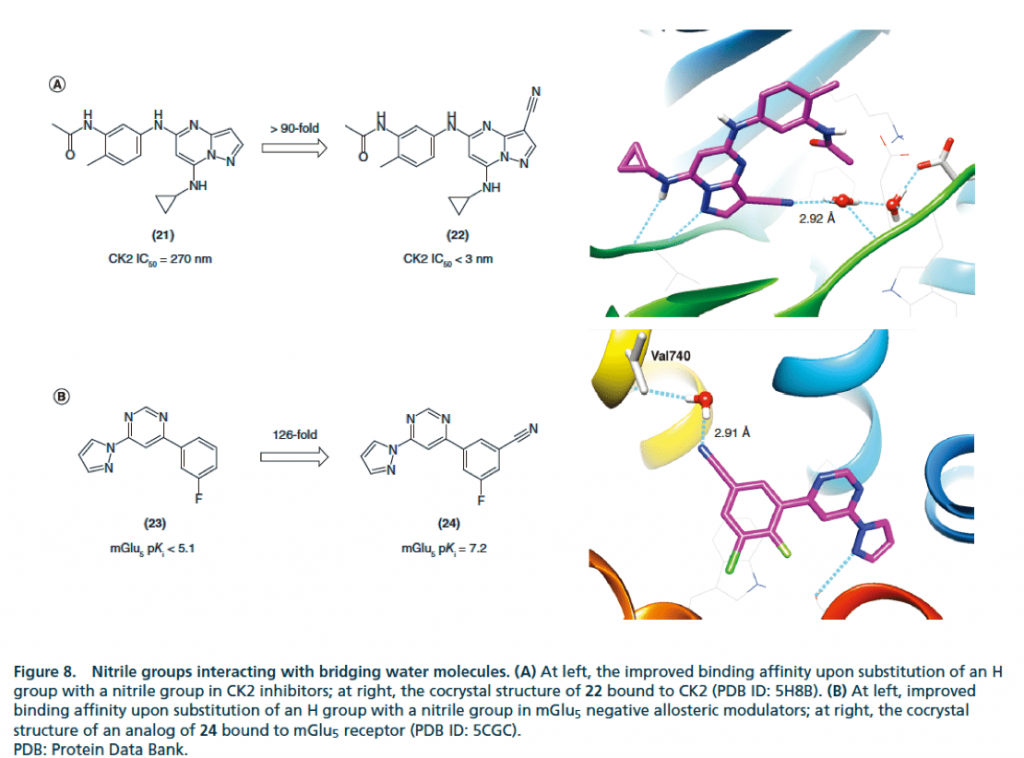 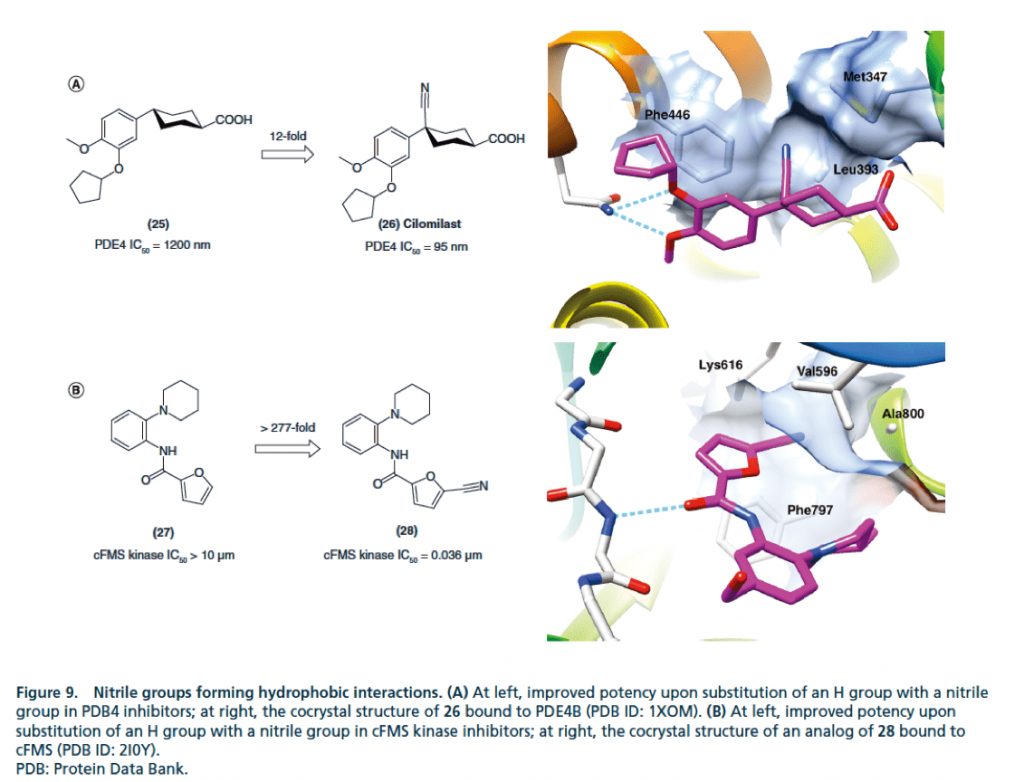 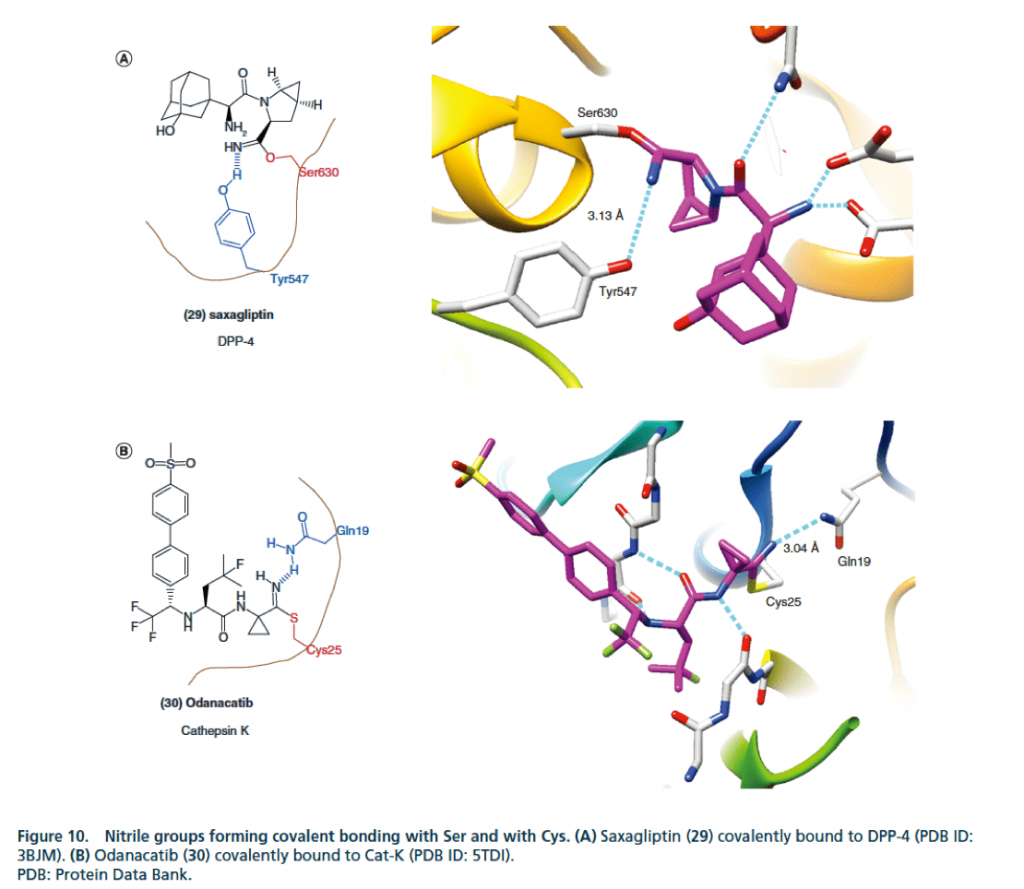 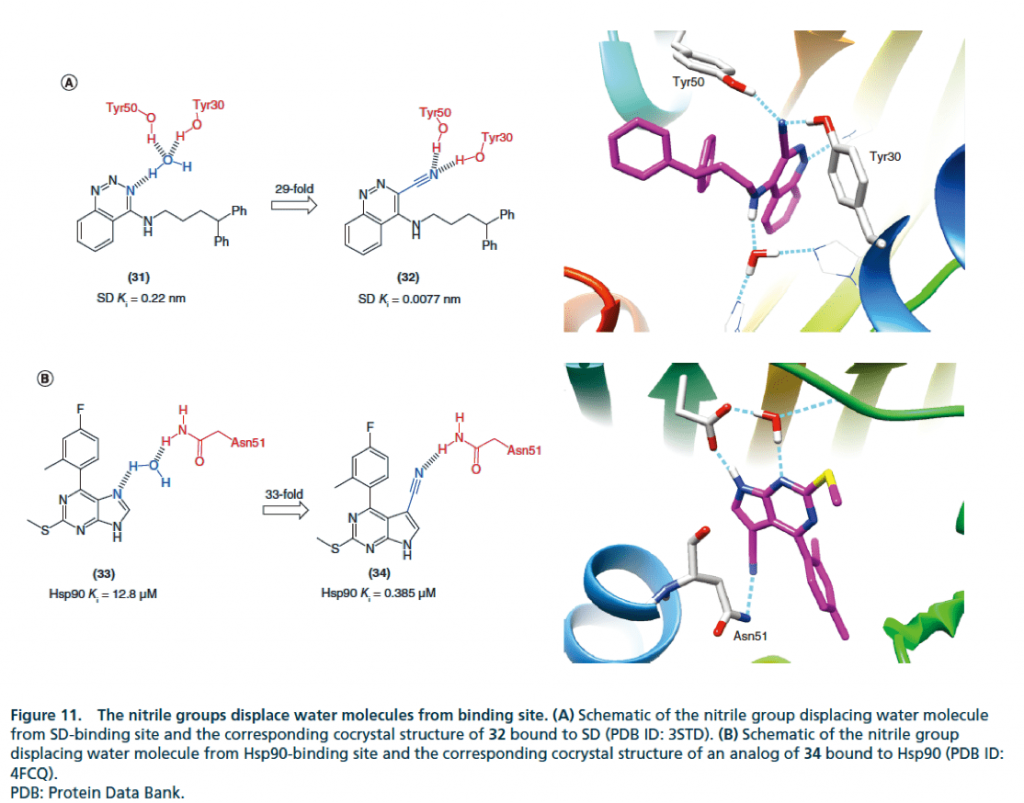 The ubiquitous H atoms and aromatic N atoms in lead compounds are usually substituted by cyano or C-CN groups.

Compared with the magic methyl effect and the necessary nitrogen atom effect (this simply means: simple structural modifications may significantly affect binding affinity), the potential of cyano groups to enhance binding affinity through direct interaction or water displacement is underestimated .

This review is helpful for us to deeply understand the way the cyano group interacts with the receptor protein.

At the same time, it can be combined with reliable calculation methods to promote the development of excellent drug molecules based on the cyano structure in the future.