Anxiety and depression are widespread and debilitating mental illnesses that affect nearly 10% of the world’s population each year.

The World Health Organization (2019) estimates that the world’s annual productivity loss due to anxiety and depression is $1 trillion, and it is on the rise.

Although the number of people receiving psychotherapy and psychotropic medication has increased in the past few decades, the prevalence and burden of anxiety and depressive disorders have remained unchanged.

In addition, there are significant differences in response to existing treatments, which are generally effective in less than half of the confirmed patients.

Therefore, there is an urgent need to gain new insights into the underlying pathophysiology of anxiety and depression in order to develop more effective therapeutic targets.

The high comorbidity between internalization disorders has been cited as evidence of possible common physiological processes, risk factors, and disease trajectories. One of the promising research areas is the microbiota-brain-gut axis, which may shed light on the common pathophysiology.

On November 29, 2020, Caitlin SM Cowan and his team from University College Cork, Ireland published a systematic review of The gut microbiota in anxiety and depression – A systematic review in Clin Psychol Rev (IF: 10.255) [1 ].

This article aims to integrate the evidence to examine whether these highly comorbid diseases have potential common microbial characteristics, and to critically exclude the influence of methodological differences and confounding factors.

A more detailed understanding of the pathophysiology of anxiety and depression may provide a basis for the diagnosis and treatment of these common and debilitating mental diseases in the future.

In March 2020, a systematic search was conducted in accordance with the PRISMA guidelines. Searched the MEDLINE (Ovid), Embase, PsycINFO and PubMed databases to capture human studies

1) assessed the composition of the gut microbiota in anxiety or depressive disorders,

2) investigated gut microbiota and measurement of anxiety/depressive symptoms The value is the association between healthy controls or related diseases (ie anxiety and depression disorders).

Through literature review, various sequencing workflows were used to assess the composition of the gut microbiota.

In addition to comparisons between groups (n=17), most studies included self-reported symptom scales, although only six studies included case-control studies that clearly assessed the association between microbial population abundance and persistent levels of internalization symptoms.

Five studies used the self-report scale as the only measure of anxiety or depression.

Figure 1 describes the screening process, and Table 1 provides a summary of the included studies. 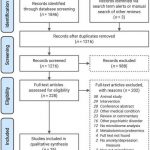 In most studies, the characterization of the gut microbiota involves a variety of methods, usually including the measurement of alpha and beta diversity.

The calculation of α diversity index (for example, Shannon, Simpson, and Faith’s phylogenetic diversity) considers and weights these factors differently, but in general, α diversity is usually used as a representative of community stability and function . 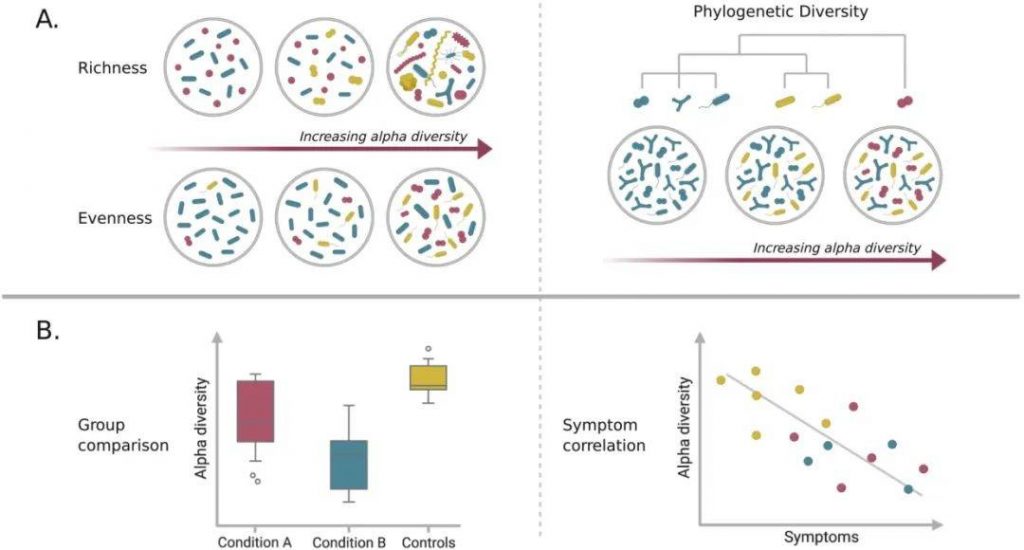 A. Conceptual representation of α diversity, used to measure complexity within a sample.

Different metrics give different emphasis to the various components of α diversity: richness (i.e. the number of members of different communities), uniformity (i.e. equal representation of these members) and phylogenetic diversity (i.e. Relevance).

B. In order to assess the relationship between α diversity and clinical symptoms, bioinformatics analysis can be performed to perform statistical tests on differences between groups or the correlation with symptom scores

Although alpha diversity is estimated separately for each subject, beta diversity is an inter-individual measure that examines the similarity of the community relative to other analyzed samples (Figure 3).

Use data dimensionality reduction techniques to visualize data on a smaller number of axes (for example, using principal coordinate analysis [PCoA]) so that the microbiological composition of closer samples is more similar.

This can be used to check whether subjects in the same group (eg suffering from depression) are clustered together in a multidimensional space by their microbiota, but separated from another group (eg, control group).

Machine learning/clustering methods can also be used to analyze whether groups can be distinguished based on microbial communities (for example, hierarchical clustering, random forest model). 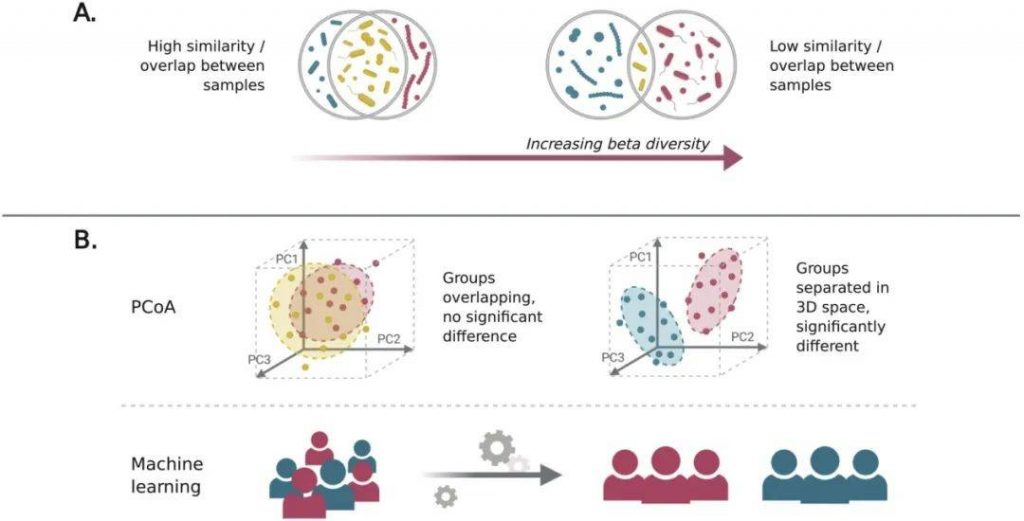 Figure 3. A. Conceptual representation of β diversity: used to measure the differences between groups of microbes. B. Selected bioinformatics analysis: Use principal coordinate analysis [PCoA] and other multi-dimensional calibration techniques to visualize group differences based on β diversity measurement, while machine learning methods test whether it is possible to use β diversity (ie microbiota characteristics) to change The subjects are divided into groups (such as clinical group and control group).

Gut microbiota in anxiety and depression

Six other studies examined the microbiota of subjects with depression, but did not specify the type of depression.

In three studies comparing the gut microbiota of subjects with generalized anxiety disorder with a control group, the alpha diversity index including richness and uniformity was tested (Figure 4). The Shannon Index was reported in all three studies.

In the three studies, there was no difference in alpha diversity between subjects with anxiety disorders (generalized anxiety disorder or anxiety NOS) and the control group. 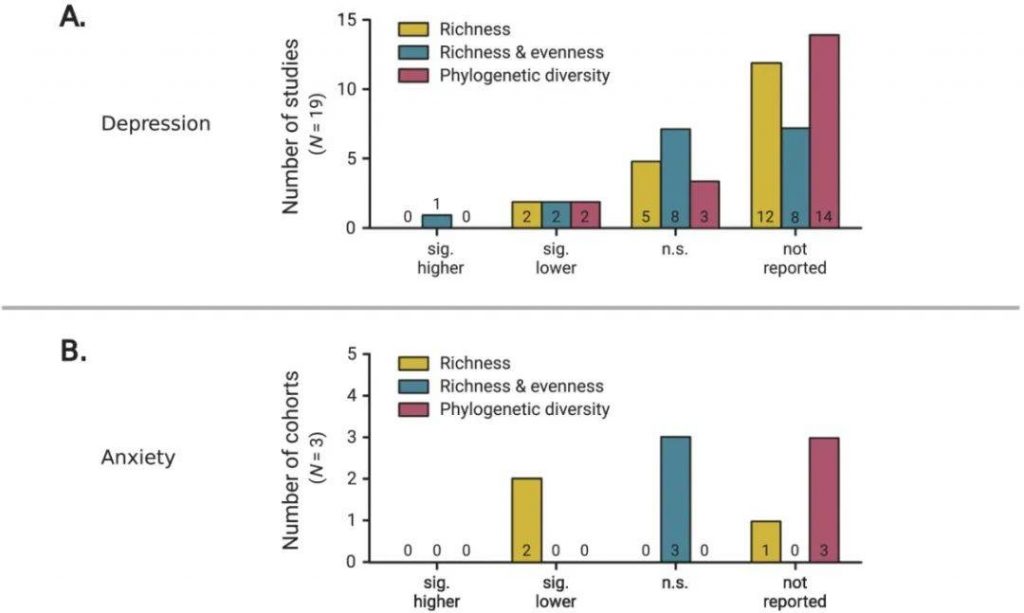 In two studies comparing subjects with generalized anxiety disorder and a control group, the richness of the community was examined.

In both studies, the richness of GAD subjects was lower compared to the control group. Phylogenetic diversity is not analyzed in any GAD study.

Three studies have investigated the cross-sectional association between depressive symptoms, but none of them reported an alpha diversity index that considers richness and uniformity.

In four studies, no significant association was observed between richness/uniformity index and depressive symptoms.

Of the five studies that included measures of anxiety symptoms, four studies investigated the correlation of the alpha diversity index (including richness and uniformity).

All four studies reported no association between Shannon Index and anxiety symptoms.

Only one study investigated phylogenetic diversity and no association was observed. No studies have checked the richness.

The β diversity analyzed using PCoA showed that the overall microbial composition of the generalized anxiety disorder subjects was different from the control group in the two studies.

The role of inflammation in the gut-brain axis

It has been reported that many groups with higher relative abundance in clinical anxiety and depression are associated with gastrointestinal inflammation.

Given the premise that certain strains are generally regarded as anti-inflammatory and used as probiotics, our study also observed a higher proportion of Bifidobacteria/Bifidobacteria in patients with depression, which is of particular concern.

Similarly, the higher abundance of bifidobacteria is associated with inflammatory bowel disease, indicating that certain strains may have inflammatory potential.

Inflammation is widely regarded as a factor in the pathogenesis of depression and anxiety.

These hypotheses stem from the observation of high levels of acute-phase proteins and pro-inflammatory cytokines in other medically healthy individuals suffering from anxiety or depression.

The changes in the gut microbiota and the resulting pro-inflammatory communication cascade effect (Figure 6) have been a possible cause of immune regulation disorders observed in mental health disorders.

Peripheral inflammation may be related to brain function, through signal transduction across the blood-brain barrier (BBB) ​​and penetration of immune cells into the brain.

Inflammatory signals also activate the vagus nerve afferent, which transmits information from the enteric nervous system to the brain, and induces the increase of norepinephrine and acetylcholine in the local central nervous system, thereby inhibiting inflammation.

In addition, the infiltration of lipopolysaccharides and bacterial metabolites may activate innate drug-resistant receptors, leading to inflammation of the central nervous system.

It is hypothesized that the long-term induction of this system will weaken the down-regulation of HPA axis hormones, leading to a continuous increase in circulating cortisol levels in anxiety and depression. 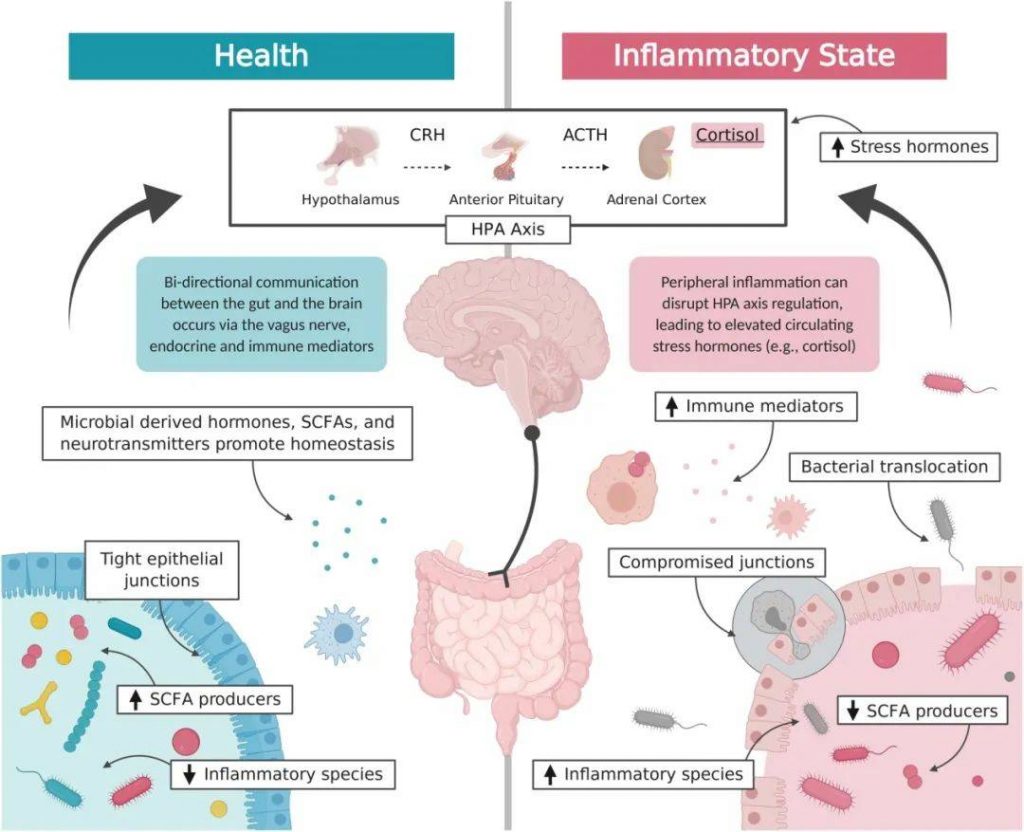 Figure 6. Inflammatory gastrointestinal state is associated with higher levels of pro-inflammatory bacterial species and relatively low abundance of short-chain fatty acid (SCFA) producing species, which generally help maintain the integrity of the intestinal barrier. The resulting damage to the intestinal barrier allows bacterial translocation and higher levels of immune mediators. Peripheral inflammation transmitted to the brain is related to the disruption of the regulation of the hypothalamus-pituitary-adrenal (HPA) axis, leading to increased circulating levels of stress hormones (including cortisol). CRH = corticotropin releasing hormone; ACTH = corticotropin.

This review summarizes the research status of the gut microbiota characteristics of anxiety/depression patients. Anxiety/depressive disorder is characterized by more species of pro-inflammatory bacteria. The abundance of pro-inflammatory bacterial species produced by short-chain fatty acids for anxiety/depression is relatively low. The diversity of α and β is found to be inconsistent. Future research should evaluate the function of the gut microbiota in diet, psychotropic drugs, and inspection species.