M1 Oncolytic Virus Research. Professor Yan Guangmei of Sun Yat-Sen University in China published a research review titled The identification and development of a novel oncolytic virus: alphavirus M1 in Human Gene Therapy. He made a systematic elaboration on the relevant biological characteristics and mechanisms of the M1 virus, allowing people to further systematically Understand the biological characteristics of the virus.

Alphavirus is a M1 virus strain, a natural virus isolated from Hainan Island, China. It was discovered by the team of Professor Yan Guangmei of Sun Yat-sen University and was identified as a new oncolytic virus in 2014.

Animal experiments have shown that M1 virus injected through the tail vein can accumulate in tumor tissues and inhibit tumor growth, while normal organs are not affected. As a result, M1 has become a hot topic in the field of oncolytic virus research.

Since the replication of alphavirus M1 depends on the RNA polymerase (NS4) encoded by the virus, there is no DNA stage in its life cycle, and the viral nucleic acid cannot recombine with the host DNA. Therefore, there is no risk of chromosomal integration leading to long-term latency or carcinogenic mutations. Through research, it is found that M1 virus enters cells through endocytosis and completes assembly in the cytoplasm and endoplasmic reticulum (ER). 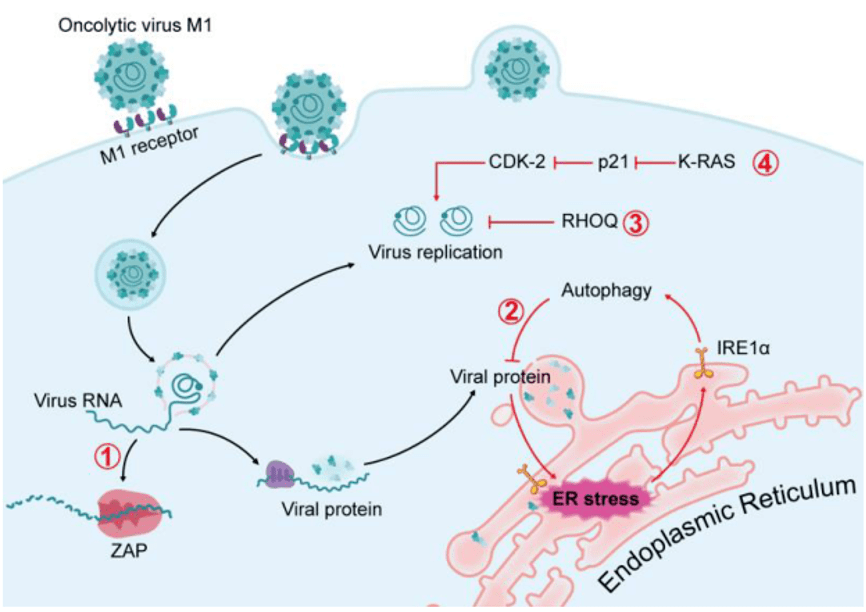 The zinc finger antiviral protein (ZAP) pathway can inhibit a variety of viral replication by inducing viral RNA degradation and suppressing translation. The expression of ZAP protein in sensitive tumor cell lines was significantly lower than that of drug-resistant tumor cell lines and normal cell lines. The reduction of ZAP expression leads to an increase in viral replication, viral RNA and protein expression, and enhances the oncolytic ability of M1. ZAP as a predictive biomarker highlights the potential of M1 for individualized treatment of cancer.

The replication of oncolytic viruses can cause misfolded viral proteins to accumulate in the lumen of the endoplasmic reticulum, activating three main unfolded protein response (UPR) pathways: IRE1α-XBP1, PERK-eIF2α and ATF6 pathways. Inhibition of IRE1α can enhance the oncolytic effect of M1 virus. Therefore, the IRE1α protein may constitute a predictive biomarker for M1 virus.

By analyzing the relationship between M1 virus infection and tumorigenic mutations in a wide range of tumor cell lines, it is found that among tumorigenic mutations, K-RAS mutations are related to the oncolytic efficiency of M1 virus. The oncogenic RAS/RAF/MEK pathway inhibits the expression of the key antiviral factor CDKN1A (p21) to promote the replication and oncolysis of M1 virus.

The replication of the oncolytic virus leads to the accumulation of a large number of viral proteins in the endoplasmic reticulum of the host cell, activates the UPR that processes unfolded foreign proteins and restores cell homeostasis. When UPR is activated and the accumulation of viral proteins cannot be overcome, downstream pathways are activated, leading to irreversible stress and apoptosis of the endoplasmic reticulum.

Viral infection causes the release of viral pathogen-related molecular patterns (PAMP) and cellular risk-related molecular patterns (DAMP), which activate the host’s innate immune system to secrete cytokines such as TNF-α, and destroy adjacent cancer cells. After M1 virus treatment, a large part of the dead cancer cells marked by caspase 3/7 were M1 uninfected, indicating that the M1 virus caused bystander killing effects. Cytokines and chemokines induced by oncolytic viruses may also recruit and activate multiple immune cells to the tumor microenvironment (TME), leading to tumor “sensitivity” and promoting the development of immune response in the direction of anti-tumor.

Recently, oncolytic virus therapy is considered to be a new type of immunotherapy because it can activate innate and adaptive anti-tumor immune responses. M1 induces the death of immunogenic tumor cells and then restores dendritic cells against tumor T cells. Intravenous injection of M1 disrupted the immune tolerance of TME, reprogrammed immune silenced tumors into immune inflammatory tumors, and triggered anti-tumor immune responses. 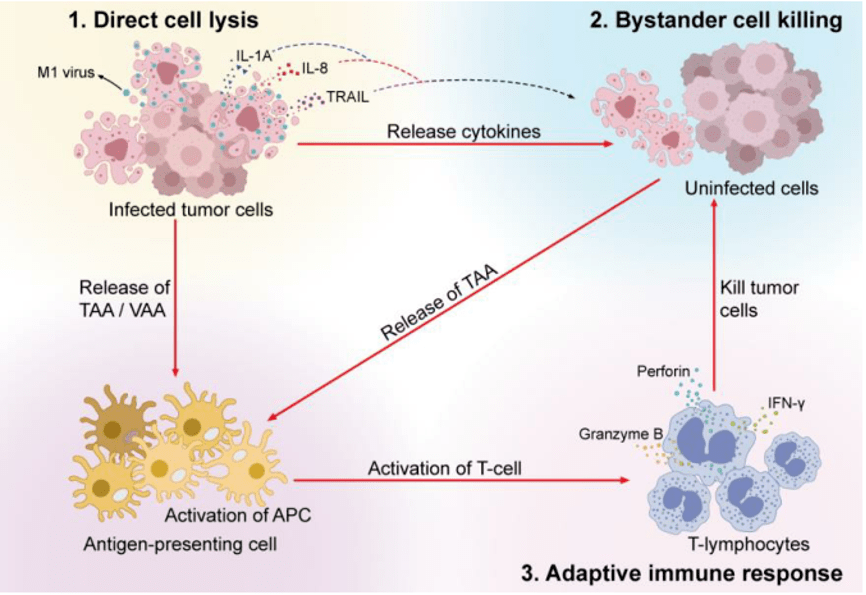 The toxicokinetic pattern of M1 virus in the blood of healthy SD rats, cynomolgus monkeys and tumor-bearing immunocompromised mice was evaluated. After intravenous injection of the M1 virus, the animal is gradually cleared from normal tissues, but it replicates in tumor tissues and increases rapidly. The virus also passes through the blood-brain barrier, specifically replicates and kills malignant glial in immunocompetent mice tumor. A number of experimental data have proved that the M1 virus has tumor selectivity and high safety. 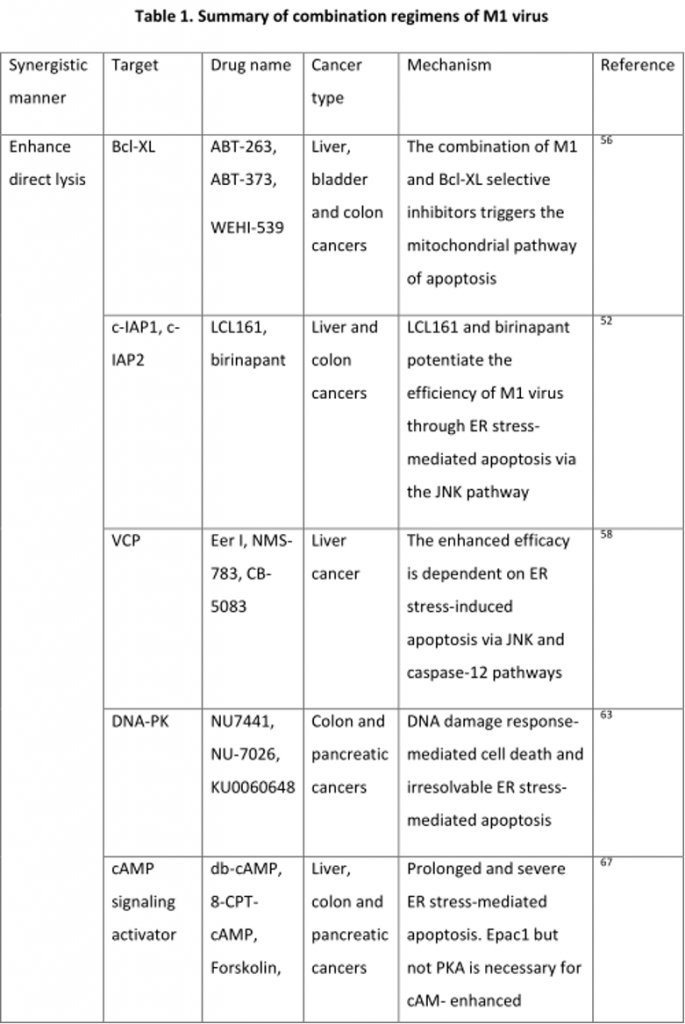 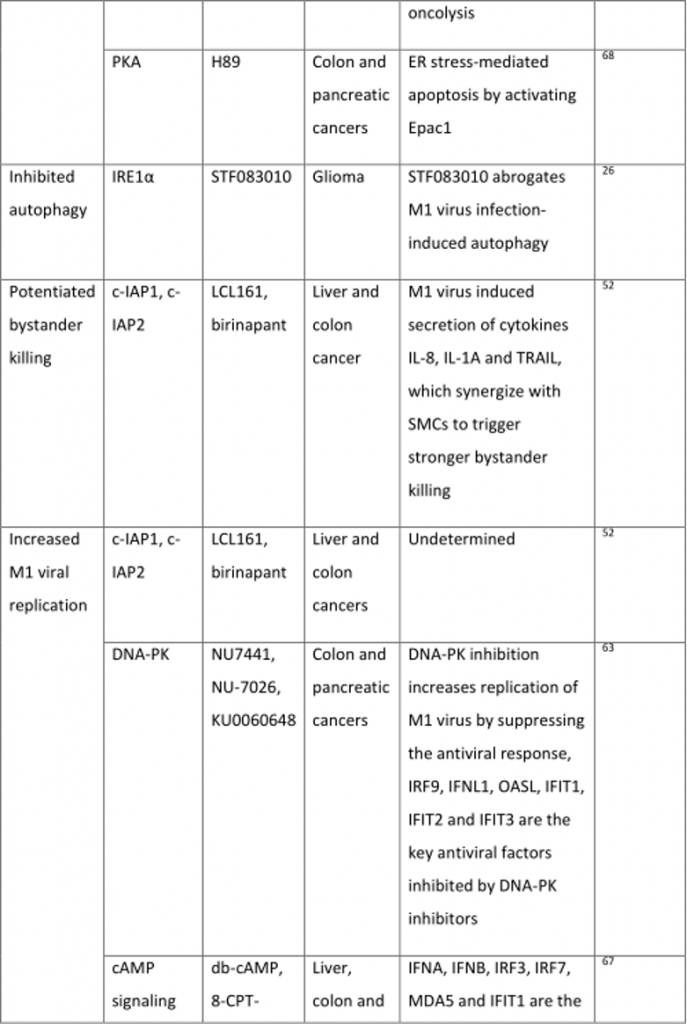 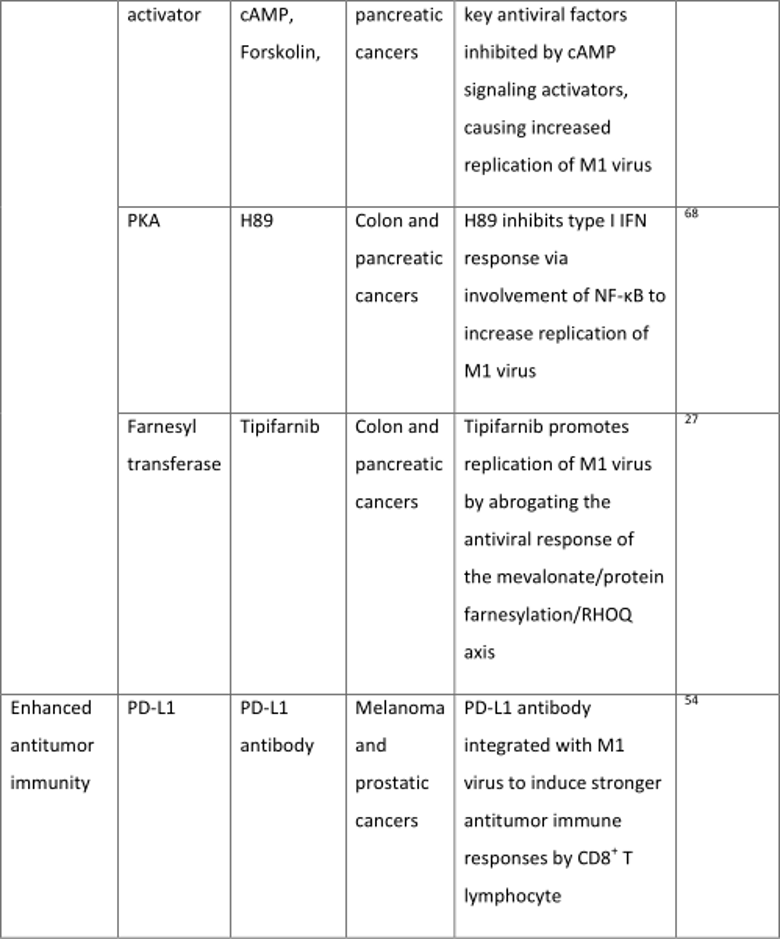