Oncolytic virus+CD47 is expected to overcome the most difficult glioblastoma

Oncolytic virus+CD47 is expected to overcome the most difficult glioblastoma.

Nature Sub-Journal: Oncolytic virus + CD47, is expected to overcome the most difficult-to-treat glioblastoma

Glioblastoma (GBM) is a common type of primary malignant brain tumor. Due to the extremely high degree of malignancy of this type of tumor, the prognosis of most patients is extremely poor: After treatments such as surgery, radiotherapy and chemotherapy, the median survival rate of glioblastoma patients is only about 15 months, and the five-year survival rate Less than 5%, so glioblastoma is one of the major challenges in today’s tumor treatment, and there is an urgent need to develop new therapies to improve the prognosis of GBM patients.

CD47 acts synergistically with SIRPα and is an important immune checkpoint for tumor cells to escape macrophages. Anti-CD47 antibodies are usually engineered on human IgG4 scaffolds to minimize the Fc-dependent effector function of innate immunity. The anti-CD47 antibody in the form of IgG1 has stronger anti-GBM activity. However, problems such as infusion toxicity and difficulty in penetrating the blood-brain barrier limit the use of anti-CD47 antibodies in the form of IgG1 for systemic treatment of GBM.

Oncolytic herpes simplex virus-1 (oHSV) is one of the most widely studied oncolytic viruses. It can selectively dissolve cancer cells while keeping normal cells basically intact. Like many other oncolytic viruses, oHSV can also activate the patient’s immune system to attack tumor cells. Adding a gene encoding a full-length anti-CD47 antibody to oHSV may improve the overall efficacy of oHSV against GBM.

The research team first evaluated the CD47 expression levels of six human GBM cell lines, and they found that all cell lines evenly expressed CD47 on the cell surface. Then, they constructed two engineered oHSVs: OV-αCD47-G1 and OV-αCD47-G4. The difference between the two viruses is that the former is an IgG1 scaffold and the latter is an IgG4 scaffold.

Then they used these two viruses to infect GBM cells and found that the infected GBM cells continued to release a considerable amount of anti-CD47 antibodies for a long time. At the same time, the two engineered oHSVs also showed strong and similar solubility. Tumor capacity and virus yield.

Finally, the research team evaluated the efficacy of OV-αCD47-G1 in an immunocompetent GBM mouse model. They used a modified CT2A mouse GBM model susceptible to oHSV infection: mouse CT2A-GBM cells were modified to express human CD47 to generate CT2A-hCD47 cells. The purpose of this modification is to bind αCD47-G1 antibody to human CD47 expressed on CT2A-hCD47 GBM cells.

By injecting CT2A-hCD47 cells into immunocompetent wild-type C57BL/6 mice, they established a GBM immunocompetent mouse model. Compared with OV-αCD47-G4, the median survival time of mice in the OV-αCD47-G1 group was significantly prolonged, indicating that the oncolytic virus expressing full-length IgG1 anti-CD47 antibody is an innovative and convenient drug and an experimental treatment Effective method of GBM. 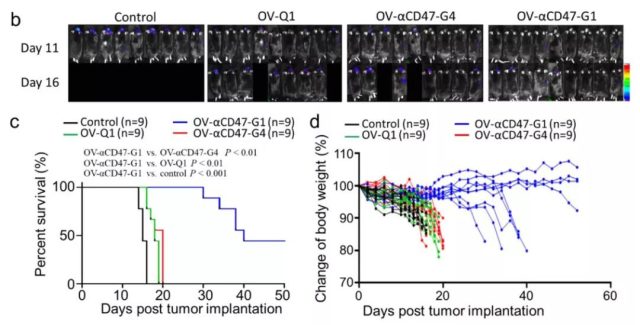 The platform can be extended to express other genes to target immune cells and/or tumor cells in the tumor microenvironment, so it is possible to improve the overall efficacy of oncolytic virus therapy and monoclonal antibody therapy in the treatment of cancer.

Oncolytic virus+CD47 is expected to overcome the most difficult glioblastoma