Is there any hope of curing the deadly cancer that is incurable? This non-toxic drug delivery system is expected to overcome treatment barriers!

[Nature Sub-Journal] Is there any hope of curing the deadly cancer that is incurable? This non-toxic drug delivery system is expected to overcome treatment barriers!

Cancer is a disease caused by a malfunction in the mechanism that controls cell growth and proliferation. In addition to the uncontrolled growth of cancer cells, they also locally invade the surrounding normal tissues and even metastasize to other parts of the body through the circulatory system or lymphatic system in the body.

Cancer cells are characterized by unrestricted and endless proliferation, which causes a large amount of nutrients in the patient’s body to be consumed; cancer cells release a variety of toxins, causing the human body to produce a series of symptoms; it can also damage the structure and function of tissues and organs, causing Necrosis and hemorrhage are combined with infection, and the patient will eventually die due to organ failure.

There are many kinds of cancers in the world that have extremely high mortality rates and it is difficult to find effective treatments, such as liver cancer, breast cancer, ovarian cancer, etc…. In order to break through the limitations of the medical field in the treatment of these cancers, recently, the United States A group of scientists in 1989 have developed a special delivery system. Will this bring hope for effective treatment of cancer?

Recently, the University of Massachusetts Amherst developed a non-toxic, bacteria-based delivery system that can detect the inside of cancer cells and then release therapeutic drugs directly into the cells. This research may bring effective targeted therapies for cancers that are currently incurable (such as liver cancer, metastatic breast cancer).

They published the results of this research in an article titled “Intracellular delivery of protein drugs with an autonomously lysing bacterial system reduces tumor growth and metastases” in the journal Nature Communications: 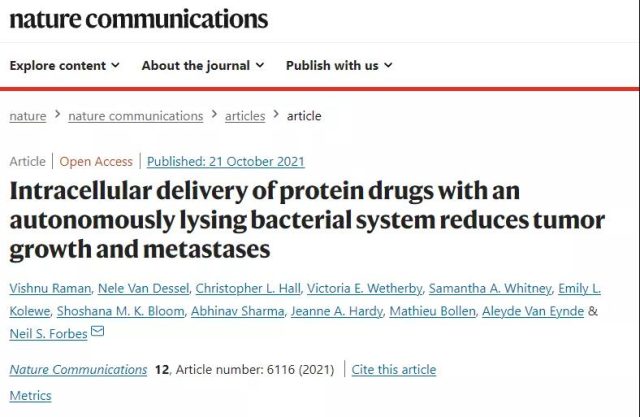 So far, because the cell membrane of solid tumors cannot penetrate, the scientific community has encountered many obstacles when exploring new treatment methods for cancer. These insurmountable obstacles have prevented them from effectively targeting key cancer pathways.

Currently they can use delivery methods: nanoparticles, cell-penetrating peptides and antibody-drug conjugates, but due to their poor ability to enter cells, this makes them unable to specifically target cancer cells in the end, and It is easily degraded by the natural protective effect of cells from foreign invaders, so the curative effect on these cancers is still very limited, and the therapeutic effect has not been broken for many years.

This very groundbreaking study at the University of Massachusetts Amherst has verified the powerful advantages of their newly developed delivery system through their continuous experiments: it can not only enter the cell easily, but also can specifically Targeting cancer cells directly delivers proteins (drugs) while ensuring that healthy cells are not affected. Once the protein payload is delivered, the bacteria will dissipate and be eliminated.

Neil Forbes of the Institute of Chemical Engineering and Applied Life Sciences said: “We can actually detect this protein in tumors, but we cannot detect it in the liver and spleen of mouse models. This system can accurately It is delivered to the location of the tumor. When we looked at the immune response and liver damage, we didn’t find any difference in the saline that the two contained.”

The delivery system was invented by bioengineer Nele Van Dessel, a postdoctoral fellow in Forbes Laboratories, who is also a lead author of this paper in Nature Communications. This delivery system uses a highly modified Salmonella, which is injected into the blood.

Scientists currently know that Salmonella will accumulate in tumors, but they do not yet know whether they will invade cancer cells. The new delivery system developed by Van Dessel can break the traditional limitations and accurately measure this cell penetration, because the modified Salmonella will turn green once it breaks through the cell membrane.

Forbes said: “No one has proven that Salmonella is present in cancer cells.” In addition, the protein used in this delivery system was developed by Jeanne Hardy, a scientist from the fields of chemistry, molecular and cell biology.

Although their experiment is still in the pre-clinical stage, the results of the experiment in mice have given them hope and confidence in the final clinical effect, especially in the area of ​​liver cancer, which will provide treatment for liver cancer.

With a lot of help, this terrible cancer, liver cancer, is the most common type of liver cancer diagnosed by 840,000 people worldwide each year. However, there are currently very few drugs for liver cancer.

When talking about his experiments and new research, Forbes said: “In terms of liver cancer, we have seen pre-clinical evidence. These data can well show that this new type of delivery system really has a strong and effective anti-tumor effect. But our experiments are still in the early stages. We only did experiments on a few mice, but we are using this therapy to prevent troublesome tumors that can pose a great threat to human health and life.”

The figure shows the intracellular lifestyle of Salmonella, which is controlled by flhDC.

Van Dessel said: “For incurable cancers like liver cancer, we can develop this effective treatment method will be able to play a great role, because there is no effective way to deal with these terrible deadly cancers. For example, in 2016, two of my family members were diagnosed with stage 4 solid cancer. I felt very helpless.

Although I have a doctorate in cancer research and have been working in this field for 10 years, I still cannot help them. . I think I let them down because I didn’t work hard enough. This devastation gave Van Dessel a lot of motivation, so she and Forbes founded Ernest Pharmaceuticals. Their goal is to apply their bacterial cancer technology to them. In practice in the clinic.

In addition, the company’s name has a very special origin, that is, the company is named after Forbes’ grandfather, whose grandfather died of prostate cancer.

The University of Massachusetts Amherst has applied for a patent for this new delivery system and licensed it to Ernest Pharmaceuticals. Van Dessel and Raman are both executives of the company, and they will seek approval from the U.S. Food and Drug Administration for clinical trials.

Van Dessel said: “I hope we can return to the clinic within two to three years. In addition to studying the treatment of liver cancer and breast cancer, we also often pay attention to ovarian cancer and pancreatic cancer. There is no great effect. I believe that through our subsequent research and experiments, we will contribute to this field.”