Adoptive immunotherapy is a revolutionary treatment method in hematology. It expresses synthetic chimeric antigen receptor (CAR) in T cells through genetic engineering. CAR-T cells targeting the CD19 antigen in B-cell leukemia and lymphoma have been clinically recognized, and are now a “routine” treatment implemented by cancer centers worldwide.

CRS usually starts with fever and physical symptoms, such as stiffness, malaise, and anorexia. In severe cases, CRS manifests as other features of the systemic inflammatory response, including hypotension, hypoxia, and/or organ dysfunction. However, if the symptoms and signs of CRS are recognized and treated in time, the organ dysfunction in most patients can be prevented or reversible.

ICAN usually manifests as toxic encephalopathy. The first is to find difficulty in vocabulary, confusion, dysplasia, aphasia, impaired fine motor skills, and lethargy. In more severe cases, seizures, motor weakness, cerebral edema, and coma have been detected. Most patients with clinical features of ICAN will have symptoms before CRS.

Therefore, CRS can be regarded as the “initiating event” or cofactor of ICAN. ICAN usually occurs after CRS symptoms subsided. Similar to CRS, ICAN is reversible in most patients without permanent neurological dysfunction. 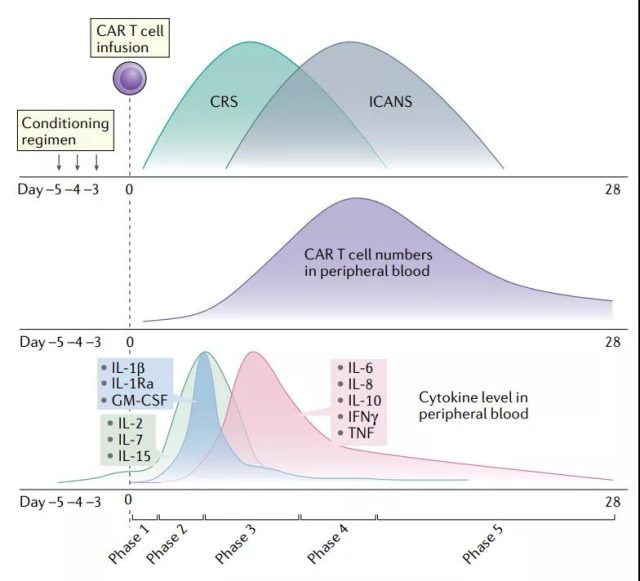 The pathophysiology of CRS can be divided into five main stages: 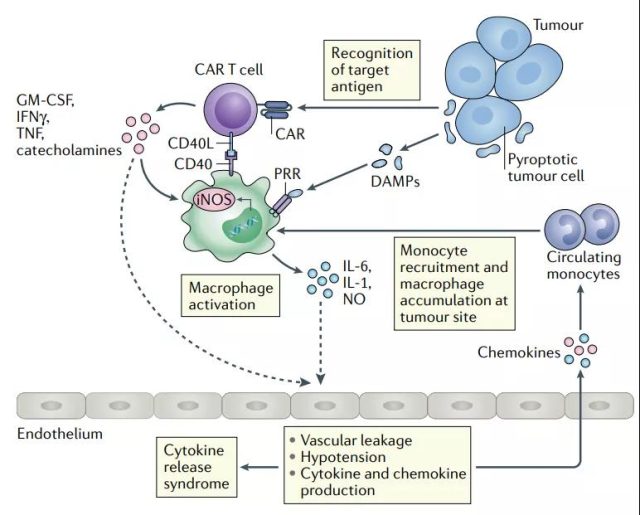 Although the CD40-CD40L interaction is not necessary to induce CRS, it can aggravate the activation of macrophages, thereby increasing the production of IL-6 and exacerbating CRS. In addition, given the bidirectional signal and potential role of the CD28–CD80/CD86 axis in inducing IL-6 production by myeloid cells, the CD28–CD80/CD86 axis may be particularly important in CRS. Blocking these interactions may reduce the severity of CRS.

Many clinical trials have shown that there is an association between the increase in serum levels of various cytokines and the risk of ICANS. Cytokines that continue to increase in multiple studies (using various CAR structures and different targeted malignancies) include IL-2, IL-6, IL-10, and IL-15.

However, although the mouse model suggests that monocyte-derived immune cells play a significant role in cytokine secretion and the pathogenesis of CRS and ICANS, it is still impossible to determine the specific source of cytokines in ICAN patients in clinical trials.

In addition, the number of myeloid cells is significantly increased in the cerebrospinal fluid of patients with severe ICANS.

Data from clinical trials indicate that the presence of antigen-positive tumor cells in the central nervous system is not necessary for the occurrence of ICANS.

However, in a recent study, single-cell RNA sequencing analysis showed that CD19 is expressed in human brain wall cells, including pericytes and vascular smooth muscle cells, which increases the targeted non-tumor effect and may be associated with CD19 CAR-T cells The possibility of neurotoxicity.

This observation may explain the higher incidence of ICANS observed in CD19 targeted therapy compared with targeted CD20, CD22 and BCMA therapy.

Cerebral edema is a rare and potentially fatal neurological complication that has been observed after CAR-T cell therapy. Existing evidence suggests that the pathophysiology of cerebral edema may be different from the common encephalopathy manifestations of ICANS.

This suggests that the destruction of the blood-brain barrier and subsequent brain edema may be due to the surge of inflammatory cytokines, rather than the infiltration of CAR-T cells into the central nervous system.

The occurrence, severity and duration of CRS and ICANS after CAR-T cell therapy may be affected by the host, tumor and/or treatment-related factors. Patients with high baseline inflammatory status (such as C-reactive protein, ferritin, D-dimer, and pro-inflammatory cytokine levels) are at increased risk of CRS and ICANS.

More severe cases of CRS and/or ICANS are also related to a higher tumor burden in multiple malignancies, which may be related to the expansion and simultaneous activation of CAR-T cell populations. In addition, the older the age, the higher the risk of severe CRS or ICANS.

Recent studies have shown that the design of the CAR molecule itself can significantly affect the proliferation of CAR-T cells and the distribution of cytokines, thereby affecting the incidence and severity of CRS and/or ICANS.

In clinical studies, this is related to the earlier and higher incidence of more severe CRS and ICANS. However, so far, there has not been a direct comparison between CAR-T cell products with CD28 and 4-1BB costimulatory domains.

At present, the new CAR structure has been designed to minimize the risk of inducing CRS and ICANS, while optimizing tumor antigen recognition and effective T cell signaling. How to effectively and reliably prevent these complications in the future will be one of the key factors for the success of CAR-T cell therapy.