In the past decade, tumor immunotherapy, which uses the immune system to fight tumor cells, has dominated the field of cancer treatment.

In immunotherapy, immune checkpoint inhibitors (ICI) are used to release the vitality of immune cells so that they can attack tumor cells. It has shown significant clinical effects in different types of solid cancers, such as renal cell carcinoma and advanced melanin. tumor.

However, ICI and some other immunotherapies, such as cytokines, can non-specifically stimulate the immune system. Therefore, they may also trigger the activation of autoreactive lymphocytes. Therefore, immune-related adverse reactions (IRAE), such as skin damage, colitis, and thyroiditis, may occur due to autoimmune attacks, limiting the clinical benefits of these treatments.

Therefore, it is of great significance to understand the characteristics and mechanisms of autoimmune responses observed in solid tumors. It will help clarify the basic mechanism of immune tolerance, help improve tumor immunotherapy methods to minimize immune-related toxicity, and may produce tumor biomarkers that are urgently needed for early cancer diagnosis and accurate prognosis.

Evasion of immune response is necessary for the survival of cancer cells. Therefore, immune evasion is considered to be one of the hallmarks of cancer. Tumor cells must establish “immune tolerance privilege” for themselves through various strategies, including the expression of immunosuppressive cytokines, the down-regulation of major histocompatibility complex (MHC) molecules, and the induction of lymph through immune checkpoint PD-L1 and other molecules Apoptosis prevents T cell activation, recruits Treg, myeloid-derived suppressor cells (MDSC) and other immunosuppressive cell populations, and inhibits the infiltration of effector lymphocytes.

In tumor immunotherapy, the immune system can recognize cancer cells through TAA or autoreactive lymphocytes. Therefore, the boundary between autoimmune response and tumor immunity is blurred, and immune tolerance may be impaired during the anti-tumor immune response.

Participants of anti-immunosuppressive TME are mainly components of cellular immunity, which include natural killer (NK) cells and CD8+ cytotoxic T lymphocytes (CTL). When these lymphocytes dissolve tumor cells, they may trigger an autoimmune response.

Compared with T cells, much less is known about tumor infiltrating B cells (TIB). TIBs may promote T effector function through cytokine or antigen presentation. They can also act as opsonins, activate the classical pathway of complement, or induce antibody-dependent cellular cytotoxicity (ADCC).

B cell-related autoimmune reactions often appear in the serum of solid cancer patients. A study showed that 84% of breast cancer tissues contain autoantibodies secreted by TIBs. Therefore, it is very important to learn more about cancer-related B-cell response and antigen specificity of antibodies (including AAB), because antibodies are stable and easy to detect, which is helpful for early diagnosis or treatment selection or prognostic classification of patients, as well as help Develop new tumor immunotherapy methods.

Origin of autoimmune response in tumors

The precipitating factors of cancer autoimmune response may be multi-factors, including host genetic factors, host’s inflammatory environment, the nature of TAAs, and the effect of cancer treatment intervention. 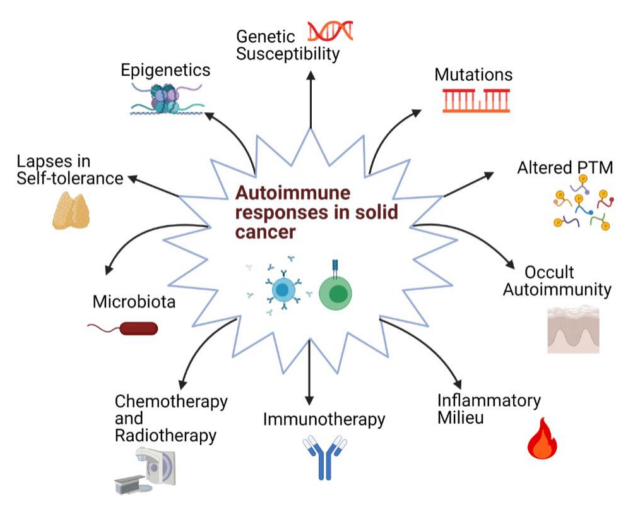 Both tumors and autoimmune diseases involve genetic changes. The shared genetic components between them may be gene mutations and single nucleotide polymorphisms (SNPs) that lead to loss and gain of function. These changes may occur in tumors and autoimmunity. Are all important proteins.

Avoidance of apoptosis is one of the hallmarks of cancer, and the role of apoptosis in autoimmunity is more complicated. It may be involved in the mechanism of self-reactive lymphocytes to evade central and peripheral tolerance.

Therefore, genetic changes that lead to reduced apoptosis can link cancer to an autoimmune response. TP53 is a typical pro-apoptotic gene, which is mutated in many different solid tumors. Interestingly, the TP53 mutation has been shown to increase the autoimmune susceptibility of a variety of mice.

The single nucleotide polymorphism in TP53 is also associated with a high risk of certain autoimmune diseases (such as inflammatory bowel disease).

Another molecule that promotes cell survival is Bcl-2. Bcl-2 is part of the intrinsic apoptotic pathway and is located on the mitochondrial membrane. Bcl-2 is mutated in some solid cancers, such as skin cancer and lung adenocarcinoma. Certain Bcl-2 genotypes have also been shown to be related to lupus. Therefore, genetic events that lead to overexpression of Bcl-2 can promote cancer and autoimmune responses.

In addition, some epigenetic and MHC molecular polymorphisms are also closely related to cancer immunity and autoimmunity.

The microbiota, especially the intestinal microbiota, acts as a physical and biochemical barrier of the immune system, and forms an inflammatory response by training the immune system. The immune effect of the microbiota is thought to be mediated by microbial metabolites and immune components such as cytokines and “gut training” immune cells.

For example, short-chain fatty acids such as butyric acid (SCFA) produced by the intestinal microbiota play an important role in tolerance induction by promoting Treg differentiation. Intestinal dysbiosis is related to many diseases, including Crohn’s disease, rheumatoid arthritis and respiratory diseases.

The microbiota is also important in the formation of tumor immune responses. Antibiotics can cause ecological disorders and destroy symbiotic microbiota. Taking antibiotics before ICI treatment can reduce the survival benefit of ICI in patients with renal cell carcinoma, emphasizing the importance of the microbiota in the response to ICI treatment.

The primary drug resistance of anti-PD-1 therapy is an important issue, and the biomarkers related to the treatment response are undergoing in-depth research. The microbiota content has become an important predictor of treatment response. Recently, a clinical trial was conducted in which patients with metastatic melanoma who did not respond to anti-PD-1 therapy underwent fecal microbiota transplantation (FMT).

In this study, patients who responded to anti-PD-1 therapy without other diseases It was used as a donor, and the results showed that the ICI resistance of 6 out of 15 patients was reversed due to changes in the intestinal flora.

CTLA-4 usually binds to CD80 and CD86 molecules on antigen-presenting cells, limiting the binding of costimulatory CD28 molecules, and depriving T cells of the signals required for activation. On the other hand, PD-1/PD-L1 can play a greater role in the downstream and surrounding areas by inducing apoptosis of activated T cells.

Therefore, ICI increases the costimulation of T cells by blocking CTLA-4 (ipilimumab), or inhibits the induced death of effector T cells by PD-1 (pembrolizumab and nivolumab) and PD-L1 (atezolizumab and avelumab). Blocking these molecules through ICI promotes an anti-tumor immune response, and at the same time the restriction on autoreactive T cells is also lifted, resulting in an immune response against normal cells. 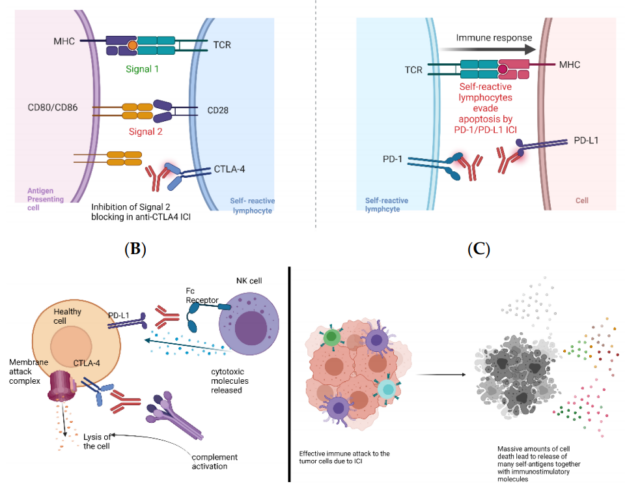 Among patients treated with ICI, 60% of patients had IRAEs. IRAE includes but is not limited to dermatitis, hypophysitis, pneumonia, pancreatitis, hepatitis, type I diabetes, colitis, and encephalitis. These immune-based toxicities usually occur sometime after the start of treatment, and may even occur a year later.

In addition to ICI, tumor immunotherapy can include adoptive T cells, cytokines and tumor vaccines. IL-2 is an effective T cell activator. It has been observed that IL-2 treatment leads to vitiligo caused by autoimmune attacks, and is associated with a good treatment response. Therefore, IRAE may be due to collateral damage caused by inflammation and immune activation after cytokine treatment.

In addition to immunotherapy, conventional chemotherapy may also cause autoimmune reactions. Chemotherapy usually targets the cell cycle to combat uncontrolled cell growth in cancer. These methods non-specifically target all dividing cells and produce a large amount of apoptosis. In the process of cell apoptosis, especially in the process of immunogenic cell death (ICD), the release of autoantigens can create an immunogenic environment. For example, chemotherapy drugs used in estrogen receptor-positive breast cancer can cause lupus and rheumatoid arthritis-like syndrome.

The target of tumor-associated autoantibodies can be abnormal expression of mutated or truncated autoantigens, or have different patterns of post-translational modification (PTM).

Autoantibodies (aAb) against mutant proteins, such as the common mutant gene product p53, have been observed in several types of solid cancers, including colorectal cancer, ovarian cancer, lung cancer, and breast cancer.

The aAb that targets proteins with abnormal PTMs, such as Mucin-1 (Muc-1), is a common TAA in epithelial cancer, and its glycosylation is abnormal. Muc-1 aAb has prognostic significance when detected in lung cancer.

Anti-tumor testicular antigen and carcinoembryonic protein aAb, these proteins may also be immunogenic. These antigens are usually only expressed in the embryonic stage and not present in adult somatic cells. They can be re-expressed in tumor cells through processes such as DNA methylation, histone modification or miRNA regulation, such as MAGE-A1 and NY-ESO-1, which can induce immune responses in melanoma and lung cancer, respectively.

AAb that changes the expression level of proteins, such as Survivin and heat shock proteins (HSPs). Survivin is a protein that inhibits apoptosis by inhibiting caspase through its interaction partner. This molecule also inhibits autophagy, another process that plays a key role in cancer and autoimmune diseases. Heat shock proteins are expressed under cellular stress and help increase protein translation and correct folding. Heat shock proteins have anti-apoptotic properties and can help cancer cells escape apoptosis. Therefore, they are overexpressed in a variety of cancers. In addition, these molecules have been shown to be related to ICD.

aAb can sometimes be detected several months before the onset of cancer, so assessing the presence of autoantibodies seems to help early detection of cancer. Currently, aAb is testing for early cancer diagnosis, such as lung cancer diagnosis. 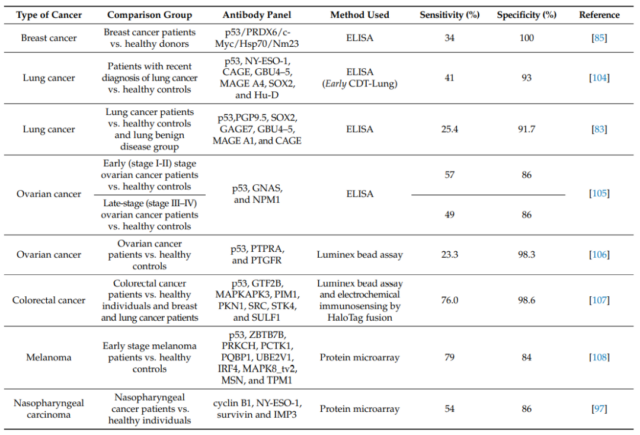 In addition, describing the targets, trigger points, and effects of aAb is also important to provide information on the immunogenicity of its own epitopes to guide the design of peptide-based cancer vaccines. If these aAbs are proven to have any anti-tumor effects, they can be integrated into tumor immunotherapy technologies.

On the other hand, the presence of aAb can also be used as an indicator of tumor destructive immune response. In the Muc-1 aAb study, the aAb level was correlated with the longer survival time of lung cancer patients. Anti-double-stranded DNA aAb in colorectal cancer is also associated with a better prognosis.

In general, aAbs has many advantages as an early diagnosis tool for various solid cancers. Their biological and prognostic capabilities may depend on their specificity, immune characteristics, and the immune environment of the body and cancer.

IRAE may limit the clinical application of ICIs, leading to discontinuation of treatment due to severe toxicity. Therefore, the biggest challenge of tumor immunotherapy is to prevent another kind of damage in the form of autoimmunity. Therefore, while using immune components to eliminate cancer, it is best to avoid destructive and potentially fatal autoimmunity.

On the other hand, ICI-induced autoimmunity may also be related to good treatment response. For example, the vitiligo observed in ICI treatment has been shown to be related to the patient’s progression-free survival rate and overall survival rate, which indicates that lymphocytes are associated with melanoma Cross-reacts with normal melanocytes.

The autoimmune response observed in the tumor environment and solid tumor immunotherapy is complex. They may be caused by genetic changes, microbiota-related factors, TAA, epitope spread, anti-tumor immune imbalance, and immunotoxicity.

Further research in the field will help to improve tumor immunotherapy to avoid or minimize IRAE, and at the same time induce effective anti-tumor immune responses, to maximize the clinical benefits of immunotherapy.