The antihypertensive effect of ARB is equivalent to that of ACEI,  and with fewer side effects!

The antihypertensive effect of ARB is equivalent to that of ACEI.  Angiotensin-converting enzyme inhibitors (ACEI) and angiotensin receptor blockers (ARB) are both first-line antihypertensive drugs recommended by the guidelines, but there are few head-to-head studies.

A study published in the journal Hypertension on July 26 compared the effectiveness and safety of ACEI and ARB in antihypertensive therapy in the real world. 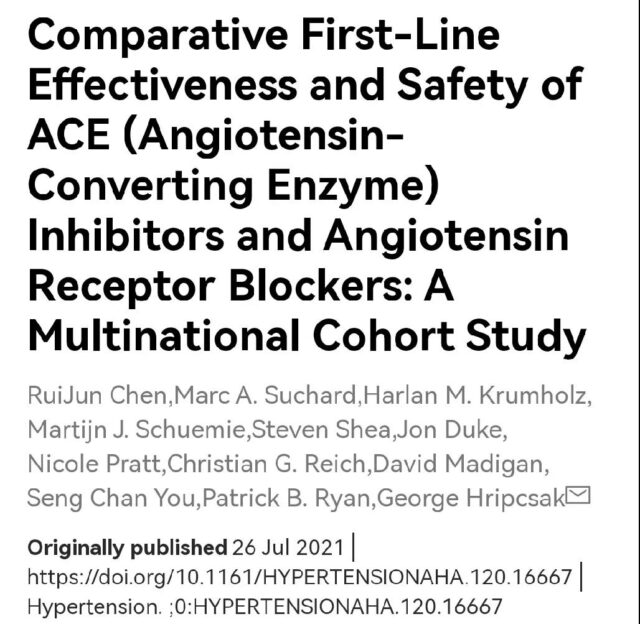 The study included all hypertensive patients who started using ACEI or ARB monotherapy between 1996 and 2018. These patients came from 8 databases in the United States, Germany, and South Korea.

Among the secondary and safety endpoints, patients using ARB had a significantly reduced risk of angioedema, cough, pancreatitis, and gastrointestinal bleeding.

These findings support that when starting hypertension treatment, if RAS blockers are to be selected, the ARB should be given priority.

The follow-up time ranged from approximately 4 months to more than 18 months. The data showed that ACEI and ARB were not significantly different in terms of primary endpoints (myocardial infarction, heart failure, stroke, etc.).

In fact, in our clinical practice, the antihypertensive prescription of ARB has far surpassed that of ACEI, and it was originally caused by the side effect of ACEI’s cough.

The author pointed out that although the association between ACEI and pancreatitis has been reported before, the association with gastrointestinal bleeding may be a new discovery. No previous studies have compared the effects of the two drugs on the risk of pancreatitis.