T-cell therapy is a type of cancer immunotherapy that uses and enhances engineered immune cells from patients to clear tumor cells from the body.

In the past decade, various cancer-targeted T-cell therapies have become a hot spot in the field of global cancer treatment research and clinical trials.

Among them, chimeric antigen receptor T cell immunotherapy (CAR-T) and T cell antigen receptor chimeric T cell (TCR-T) have made good progress in the treatment of leukemia and lymphoma , which inspired scientists Extend it to the field of treating solid tumors.

However, the efficacy so far has not been ideal. Therefore, scientists need to better understand the targeting behavior of T-cell therapy in solid tumors to improve its clinical efficacy.

On July 25, 2022, researchers from the Hubrecht Institute in the Netherlands, Princess Maxima Children’s Oncology Center and other institutions published a research paper entitled: Uncovering the mode of action of engineered T cells in patient cancer organoids in the journal Nature Biotechnology .

The research team has designed a 3D imaging analysis platform that brings the working mode of T-cell immunotherapy into a real-time view, thereby paving the way for improved T-cell therapy in solid tumors. 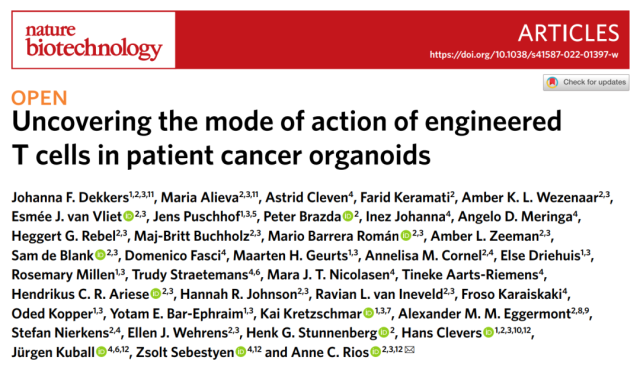 To extend the successful cellular immunotherapy for hematological tumors to the realm of solid tumors, the team refined in vitro models to reveal the therapeutic mode of action at the molecular level.

In the new study, they designed a multispectral-based 3D imaging and analysis platform called BEHAV3D .

BEHAV3D can track in real time the efficacy and mode of action of T-cell immunotherapy on approximately 60 human cancer organoid cultures.

The researchers detected dramatic changes in the effect of αβ T cells (TEGs) engineered to express γδ TCRs in killing, as well as different targeting kinetics over time, in cultures from 14 breast cancer patients : Mortality in patient-derived organoids (PDOs) ranged from nearly 0 to 100%; moreover, changes in killing kinetics were also observed between organoid cultures from the same patient, as compared to the initial size of co-cultured organoids It doesn’t matter. 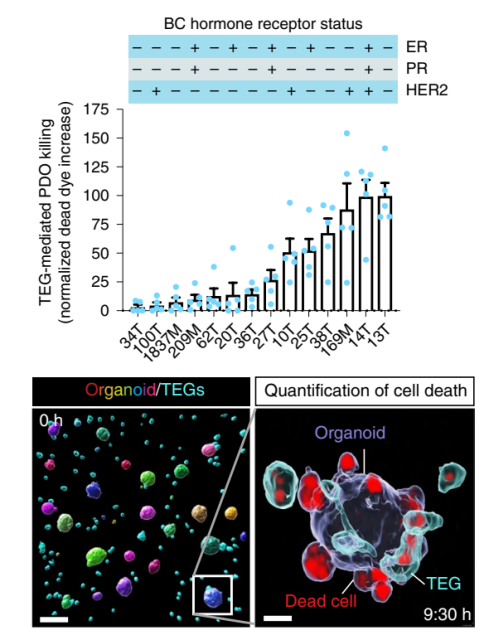 When exposed to breast cancer patient-derived organoids, TEGs could be classified into nine subpopulations with distinct behavioral patterns.

The researchers applied BEHAV3D to more than 150,000 engineered T cells cultured with patient-derived solid tumor organoids, identifying a population of cells with “super-engaged” behavior, including T cells with potent serial killing capabilities; There are cells that appear to be doing nothing and are not working. The researchers say this means that there is still a lot of room to improve clinical outcomes by promoting the most effective tumor-targeting behaviors.

In order to stimulate the most efficient behavior of T cells, the underlying mechanisms that govern this behavior need to be understood, the researchers said.

In this study, for the first time, they linked cell behavior to the genes that cause it, to identify specific genetic signatures of highly efficient T cells that kill tumor cells continuously.

Because BEHAV3D can be applied to different kinds of T cell therapy, as well as cancer subtypes.

Thus, the team says, BEHAV3D will pave the way for further improvements in the various T-cell therapies currently in development that target solid tumors.