On July 28, 2022, DeepMind released a news article titled ” AlphaFold reveals the structure of the protein universe ” on the company’s official website, announcing that AlphaFold has predicted almost all known protein structures in the world. 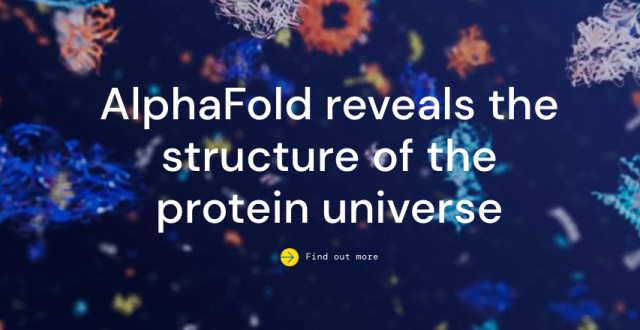 In just one year since AlphaFold released its source code, more than half a million researchers have accessed AlphaFold and used their data to accelerate their scientific research.

How did AlphaFold develop and what will it bring to the world? How many surprises await us at the combination of AI and biological science?

The emergence of AlphaFold has made it extremely simple to predict complex protein structures. Today, many unsolved protein structures have gradually surfaced, helping us unlock the code of life layer by layer.

In fact, the unsolved mysteries of the world always attract countless people to guess and explore.

The structure of complex proteins is also a problem that attracts scientists.

In July 2021, DeepMind and the European Bioinformatics Institute (EMBL-EBI) collaborated, and it has been a year since they released the AlphaFold source code and created the AlphaFold protein structure database.

When the database was released, it already contained 98.5% of human protein structures.

To date, their Nature paper has been cited more than 4,000 times, and more than 500,000 researchers from 190 countries have accessed the AlphaFold database, viewing more than 2 million structures.

From solving the problem of plastic pollution, to understanding Parkinson ‘s disease , to the formation of ice, leishmaniasis, etc., AlphaFold’s influence has gradually become prominent.

Today, DeepMind and EMBL-EBI have further collaborated, they have predicted almost all protein structures known to the scientific community, and are in the process of synchronizing these protein structures into the AlphaFold database.

This database is about to expand to 200 times its current size, and the amount of protein structure data will expand from nearly 1 million to more than 200 million.

This expansion will no longer focus only on human proteins, but include plants, bacteria, animals and other Protein structures of various species including living organisms. 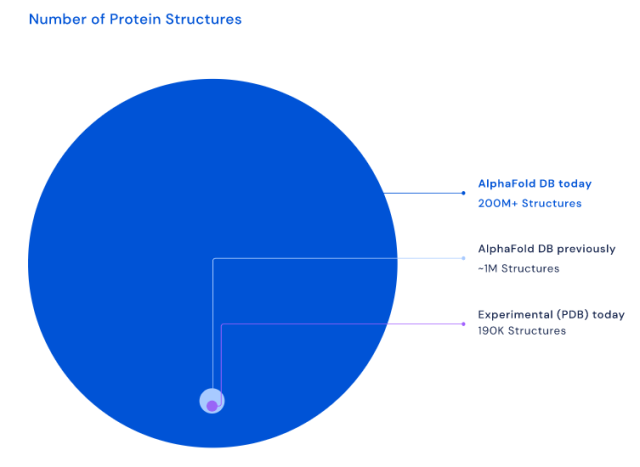 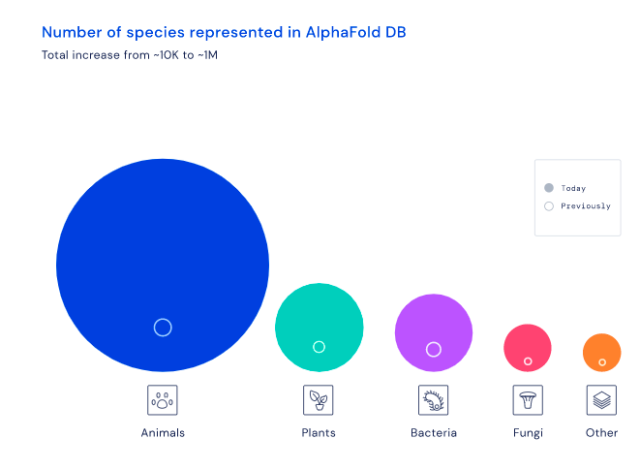 Edith Heard, director of EMBL, said AlphaFold now provides a 3D view of the protein universe, which shows us the power of multidisciplinary fusion.

Demis Hassabis, founder and CEO of DeepMind, said AlphaFold has already had an incredible impact on some of our biggest global challenges.

We hope this expanded database will help countless scientists do their important work and open up entirely new avenues for scientific discovery.

Before AlphaFold released its open source code, we knew very little about it. How did this cross-border integration platform develop?

How AlphaFold developed: From a small team to a global shock

As early as March 2016, when our eyes were still focused on AlphaGo (AlphaGo) defeated the global Go players, DeepMind had already determined that its artificial intelligence technology could be applied to scientific experiments, so they aimed at the “protein folding problem” A small team was formed to start working on the problem of protein structure prediction.

In December 2018, at the 13th Key Assessment of Protein Structure Prediction (CASP13) , AlphaFold’s performance was first publicly tested, and it won the number one result, and their team expanded and focused on developing an innovative system.

In November 2020, AlphaFold participated in CASP14 and was recognized by the CASP organization as “the solution to 50 years of protein folding.” At this time, AlphaFold began to be known by researchers from all walks of life.

AlphaFold really starts to have a huge impact on the field of protein research, starting in July 2021.

A week later, DeepMind partnered with EMBL-EBI for the first time to launch the AlphaFold protein structure database.

So far, the power of AlphaFold has been handed over to researchers around the world.

17 of these groups include neglected tropical diseases, which affect the lives of more than 1 billion people worldwide, and this database update provides new ideas for the treatment of these diseases.

Over the past seven years, the AlphaFold research team has never stopped exploring, and today, their results have attracted attention from all walks of life.

The result of the combination of AI and biological science has caused ripples in the field of protein research. Similarly, this idea of ​​cross-border integration has also provided new ideas for life science research.

New thinking: What other surprises will artificial intelligence bring us?

Since the beginning of AI’s “debut” in the field of biomedicine, more and more scientists have rushed to this track, trying to let AI better help us unravel the mysteries of proteins.

They used deep learning methods to improve RoseTTAFold, and AI-trained can “conceive” and design protein structures based on predetermined protein targets or known protein functional sites. It’s like when you type a few letters on your phone, the input method will automatically complete the whole word for you.

David Baker, professor of biochemistry at the University of Washington School of Medicine and director of the Institute for Protein Design

After designing the protein structure, the team of David Baker and Jue Wang used AlphaFold to verify their prediction results.

The design they obtained could be reproduced by AlphaFold with a very small error, which proved that the software they designed had very good performance. high reliability.

This is also an important breakthrough in the field of AI and protein research.

We don’t know what kind of surprises AI can bring us in the future, and everything just needs to be verified by time.