At present, we have no effective treatment for Alzheimer’s disease (AD), but early diagnosis and early intervention can improve the survival of patients. Recently, researchers from Kaunas University in Lithuania developed a new algorithm based on deep learning and artificial intelligence based on the previous early detection of AD. The image processing is handed over to the machine through functional magnetic resonance imaging (fMRI) Identifying areas of the brain that are related to the onset of Alzheimer’s disease, and even some patients who have no obvious symptoms at an early stage, predict Alzheimer’s disease with close to 100% accuracy.

Alzheimer’s disease (AD) is a progressive neurodegenerative disease with insidious onset. Clinically, it is characterized by general dementia such as memory impairment, aphasia, apraxia, cognition, impairment of visual spatial skills, executive dysfunction, and personality and behavior changes. The etiology is still unknown. Those who develop the disease before the age of 65 are called Alzheimer’s disease; those who develop the disease after the age of 65 are called Alzheimer’s disease, which affects most of the aging population in the world. Therefore, the need for early diagnosis of this disease to establish effective care and improve patients’ lives cannot be overemphasized.

Researchers at Kaunas University in Lithuania have developed a method based on deep learning that can predict the possible incidence of Alzheimer’s disease through brain images with an accuracy rate of over 99%.

This method is analyzing 138 subjects The functional MRI image of the MRI was developed and is superior to the previously developed in terms of accuracy, sensitivity and specificity. 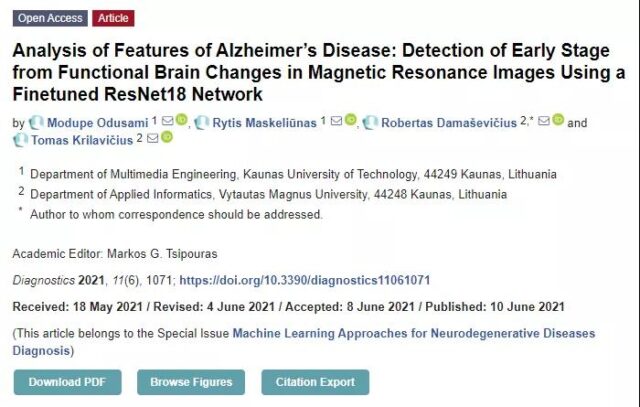 According to the World Health Organization, Alzheimer’s disease is the most common cause of dementia, accounting for 70% of dementia cases. Approximately 24 million people worldwide are affected, and this number is expected to double every 20 years. Due to the aging of society, the disease will become a costly public health burden in the coming years.

“Medical professionals all over the world are trying to raise people’s awareness of the early diagnosis of Alzheimer’s disease, which provides patients with better opportunities to benefit from treatment. This is also the most important issue when Nigerian PhD student Modupe Odusami chooses the subject. One of the topics of this issue.” Rytis Maskeliūnas, a researcher in the Multimedia Engineering Department of the Information Engineering Department of Kaunas University of Technology, once said, he is also Odusami’s doctoral supervisor.

Delegate image processing to the machine

Analyze the characteristics of Alzheimer’s disease (AD) and create more effective and accurate tools based on the latest technology. Currently, there are several methods available for early detection of AD, such as neuroimaging technology, behavioral and emotional analysis, commonly referred to as cognitive methods, and cognitive testing. Behavioral analysis methods help detect irregular responses to common problems in daily life activities, some of which involve installing sensors in patients’ homes. One of the main disadvantages of this strategy is that it has many limitations, because installing sensors in patients’ homes requires their permission.

One of the early symptoms of Alzheimer’s disease may be mild cognitive impairment (MCI), which is the stage between normal aging and dementia. According to Maskeliūnas, based on previous research, functional magnetic resonance imaging (fMRI) can be used to identify areas of the brain that are associated with the onset of Alzheimer’s disease. There are usually no obvious symptoms in the early stages of MCI, but in quite a few cases, it can be detected by neuroimaging.

However, although theoretically possible, manually analyzing fMRI images to try to identify changes associated with Alzheimer’s disease requires not only specific knowledge but also time. The application of deep learning and other artificial intelligence methods can greatly accelerate this speed. The discovery of MCI features does not necessarily mean that there is a disease, because it may also be a symptom of other related diseases, but it is more like an indicator and possible assistant that can guide medical professionals to evaluate.

“Modern signal processing allows image processing to be delegated to a machine, and the machine can complete image processing faster and more accurately. Of course, we dare not recommend that medical professionals rely 100% on any algorithm. Think of a machine as a robot. Complete the most tedious tasks, sort the data and search for features. In this case, after the computer algorithm has selected the cases that may be affected, the experts can study these cases more carefully, and ultimately, with the diagnosis and treatment faster Everyone will benefit if it reaches the patient’s hands.” said Maskeliūnas, who is the head of the model research team.

We need to make the most of data

The model based on deep learning was developed by a fruitful collaboration of researchers in the field of artificial intelligence in Lithuania. The model uses the famous ResNet 18 (residual neural network) to obtain functional MRI images of 138 subjects sort. The images are divided into six categories: from healthy to mild cognitive impairment (MCI) to Alzheimer’s. A total of 78,753 images were studied. For evaluation, the data set was divided into a training data set and a validation data set. The segmentation rates were 70% (total 51443 images) and 30% (total 27310 images).

The data for this study comes from the ADNI (Alzheimer’s Disease Neuroimaging Initiative) database (http://adni.loni.usc.edu/).

The model can effectively find the MCI features in a given data set. For early MCI and AD, late MCI and AD, and MCI and early MCI, the best classification accuracy is 99.99%, 99.95%, and 99.95%, respectively.

Maskeliūnas said: “Although this is not the first attempt to diagnose early-onset Alzheimer’s disease from similar data, our main breakthrough is the accuracy of the algorithm. Obviously, such a high number does not represent real reality. But we are working with medical institutions to obtain more data.”

According to him, the algorithm can be developed into software to analyze data collected from vulnerable groups (people over 65 years of age, with a history of brain damage, hypertension, etc.), and notify medical staff of early-onset Alzheimer’s disease-related data abnormal situation.

“We need to make full use of data,” Maskeliūnas said. “That’s why our research group focuses on European open science principles so that anyone can use our knowledge and further develop them. I believe this principle is significant for social progress. contribute.”

The principal researcher’s main field is the application of modern artificial intelligence methods to signal processing and multi-mode interfaces. He said that the above model can be integrated into a more complex system to analyze several different parameters, for example, it can also monitor eye movements. Tracking, “face reading”, voice analysis, etc. Such technology can be used for self-checking and reminding. If anything causes concern, you can seek professional advice.

Maskeliūnas said: “Technology can make medicines more accessible and cheaper. Although they will never (at least not soon) truly replace medical professionals, technology can encourage prompt diagnosis and help.”