mRNA – based nucleic acid vaccines were proposed more than 30 years ago, and mRNA vaccines have many advantages over traditional vaccines: Unlike some viral vaccines, mRNA does not integrate into the genome, avoiding concerns about insertional mutations; mRNA vaccines can be Manufactured in a cell-free manner, enabling fast, cost-effective, and efficient production.

Furthermore, a single mRNA vaccine can encode multiple antigens, enhance immune responses against adaptive pathogens, and be able to target multiple microbial or viral variants in a single formulation.

mRNA vaccines are an important class of cancer vaccines that can encode and express TAA, TSA and their related cytokines.

mRNA cancer vaccines can stimulate humoral and cellular immunity, improving the adaptability of these vaccines to different diseases and patients. Currently, a variety of mRNA cancer vaccines are being developed in the clinic, bringing a new dawn to cancer immunotherapy.

In vitro transcribed ( IVT ) mRNA mimics the structure of endogenous mRNA and has five sections ranging from 5ʹ to 3ʹ including: 5ʹcap, 5ʹ untranslated region ( UTR ), an antigen-encoding open reading frame, 3ʹUTR and a PolyA tail. 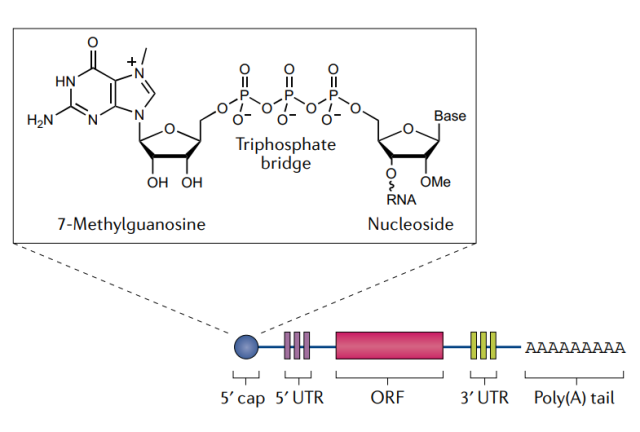 The length of the PolyA tail indirectly regulates mRNA translation and half-life.

The 5′ and 3′ UTRs flanking the coding region regulate mRNA translation, half-life and subcellular localization, and native UTRs from highly expressed genes such as α- and β-globin genes are the first choice for synthetic mRNAs.

In addition, UTRs can be optimized according to cell type, such as by removing miRNA-binding sites and AU-rich regions in the 3′ UTR to minimize mRNA degradation.

Another strategy to avoid detection of pattern recognition receptors, pioneered by CureVac, uses sequence engineering and codon optimization to deplete uridine by increasing the GC content of vaccine mRNAs.

In addition to improvements in mRNA sequences, significant progress has been made in streamlining mRNA production. Synthetic mRNAs used clinically are transcribed in vitro from DNA plasmids using bacteriophage RNA polymerase T7 ( T3 and SP6 polymerases can also be used ).

Since mRNAs are large ( 10 4 –10 6 Da ) and negatively charged, they cannot pass through the anionic lipid bilayer of the cell membrane.

Furthermore, in vivo, it is engulfed by cells of the innate immune system and degraded by nucleases.

Therefore, in vivo applications require the use of mRNA delivery vectors that transfect immune cells without causing toxicity or unnecessary immunogenicity.

At present, many solutions based on innovative materials have been developed for this purpose.

Lipid nanoparticles are the most clinically advanced mRNA carriers. As of June 2021, all SARS-CoV-2 mRNA vaccines under development or approved for clinical use use LNPs.

Ionizable lipids form nanoparticles with mRNA in an acidic buffer, which positively charges the lipid and attracts the RNA.

Furthermore, they are positively charged in the acidic environment of endosomes, which facilitates their fusion with the endosomal membrane, releasing them into the cytoplasm.

DODAP and DODMA were the first ionizable lipids for RNA delivery. The efficacy of DODMA was improved by design, resulting in DLin-MC3-DMA.

This is the first FDA-approved drug formulation to use an ionizable lipid: the siRNA drug patisiran ( Onpattro ).

In addition to the efficient and safe delivery of siRNA, DLin-MC3-DMA was also used for mRNA delivery.

In addition to the quest to improve efficacy, there is an increasing focus on improving the specificity of drugs, especially for vaccines and immunotherapies.

The lipid 11-A-M58, which contains a polycyclic adamantane tail, and the lipid 93-O17S59, which contains a cyclic imidazole head, have been designed to target T cells in vivo. Although the mechanism remains unclear, the cyclic groups of these lipids are critical for targeting T cells.

Although ionized lipids are arguably the most important components of LNPs, three other lipid components ( cholesterol, helper lipids, and pegylated lipids ) also contribute to nanoparticle formation and function.

Cholesterol, a naturally occurring lipid, enhances nanoparticle stability by filling the voids between lipids and facilitates fusion with endosomal membranes during uptake into cells.

The pegylated lipid component of LNPs is composed of polyethylene glycol ( PEG ) combined with anchor lipids such as DMPE or DMG .

Although not as clinically advanced as LNPs, polymers have similar advantages to lipids for efficient mRNA delivery. Cationic polymers condense nucleic acids into complexes of different shapes and sizes that can enter cells by endocytosis.

Polyethyleneimine is the most widely studied nucleic acid delivery polymer. Despite its excellent efficacy, its toxicity limits applications due to its high charge density.

In addition, several less toxic biodegradable polymers have been developed. For example, poly( β-aminoester ) excels in mRNA delivery, especially to the lung.

Recently, a new class of lipid-containing polymers, called charge-altered releasable transporters ( CARTs ), have been developed, which can effectively target T cells, which are very difficult to manipulate.

In addition to lipid and polymer carriers, peptides can also deliver mRNA into cells thanks to cationic or amphiphilic amine groups ( such as arginine ) in their backbone and side chains, which The base electrostatically binds to the mRNA and forms a nanocomplex.

The arginine-rich protamine peptide, which is positively charged at neutral pH, can also concentrate mRNA and facilitate its delivery.

The complex of protamine with mRNA activates the Toll-like receptor ( TLR7, TLR8 ) pathway that recognizes single-stranded mRNA, therefore, it can also be used as an adjuvant for vaccine or immunotherapy applications.

Finally, mRNA can also be delivered by cationic nanoemulsions based on squalene, which consist of oily squalene cores.

Some squalene formulations, such as Novartis’ MF59, are used as adjuvants in FDA-approved influenza vaccines.

The mechanism by which squalene-based cationic nanoemulsions escape from endosomes and deliver mRNA into the cytoplasm is unclear.

Following injection of an mRNA cancer vaccine, the protein encoded by the mRNA is synthesized by the ribosome and then post-translationally modified to produce a properly folded functional protein, which is presented to the immune system.

This process is similar to the natural process of RNA virus infection and successive induction of protective immune responses. Entry of exogenous mRNA into the cytoplasm results in a similar response to endogenous mRNA.

The host immune system activates the innate immune response through the detection of pathogen-associated molecular patterns ( PAMPs ) by PRRs.

Following vaccine injection, mRNA and delivery system components will be recognized as foreign substances through a series of PRRs, leading to the activation of Toll-like receptors ( TLRs ), such as TLR3, TLR7 and TLR8, which are mainly expressed on antigen presenting cells ( APCs ).

Exogenous IVT mRNA is recognized by various PRRs in the cell membrane, endosome, and cytoplasm, and plays a role in stimulating endogenous immune responses. 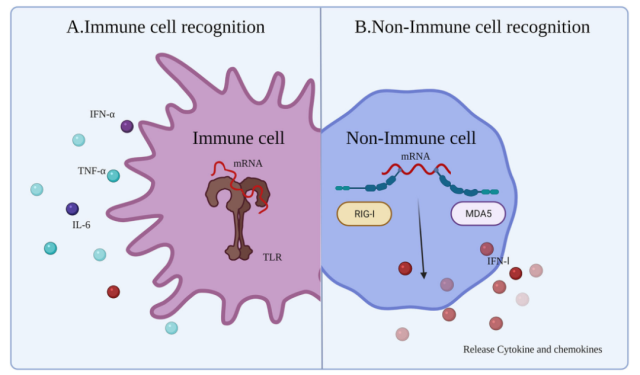 The immunogenicity of IVT mRNA is mainly mediated by TLR7 and TLR8. TLR7 is expressed by B cells, macrophages, and dendritic cells and mediates the recognition of single-stranded RNA ( ssRNA ). In the cytoplasm, some other PRRs can sense different types of RNA, such as dsRNA and ssRNA.

Following mRNA vaccination, the encoded protein is translated and presented to the immune system and stimulates adaptive immunity.

The mRNA-encoded proteins are taken up by APCs through endocytosis or phagocytosis, and they may form phagocytic vesicles or endosomes containing antigenic proteins that are presented by the major histocompatibility complex on dendritic cells. 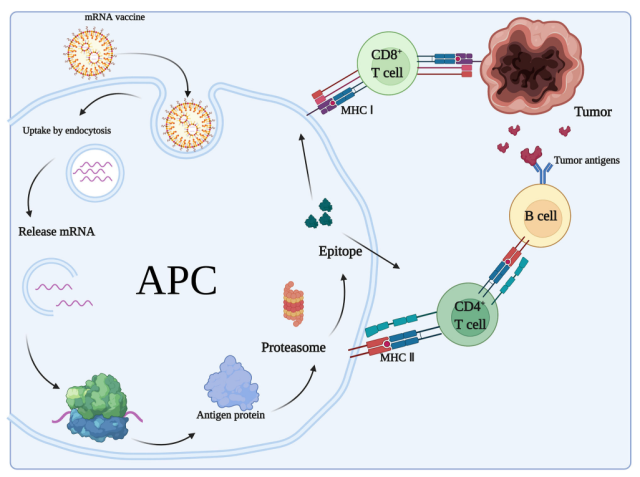 In addition, somatic mutations may generate neoantigen epitopes, and mRNA vaccines encoding neoantigens are considered to be the best candidates for cancer vaccines.

These cells can be activated by the mRNA vaccine to produce sufficient numbers of potent and durable neutralizing antibodies.

Vaccines based on IVT mRNA are being progressively developed for a variety of tumor treatments.

NY-ESO-1, tyrosinase, MAGE-A3, MAGE-C2, and TPTE have been used as TAAs for melanoma mRNA vaccines in multiple clinical trials.

BNT111 is a BioNTech FixVac platform to develop cancer vaccines that utilizes a fixed combination of TAAs designed to trigger a robust and precise immune response against cancer.

In late 2021, the FDA granted Fast Track designation for BNT111, a novel cancer immunotherapy for advanced melanoma, which is currently being studied in two clinical trials.

An interim analysis of a phase I trial ( NCT02410733 ) reported that BNT111 is an effective immunotherapy.

A subsequent phase II trial ( NCT04526899 ) ​​investigated the safety and efficacy of BNT111 alone or in combination with the anti-PD-1 antibody cemiplimab.

mRNA vaccines encoding multiple mutated antigens are ideal for the treatment of mutation-induced malignancies, and this type of cancer vaccine has undergone the most clinical trials.

mRNA-4157 specifically screens and encodes 20-34 neoantigens on a single mRNA molecule, depending on the patient’s cancer mutation.

Interim data from a Phase 1 trial ( NCT03313778 ) showed that mRNA-4157 monotherapy or in combination with the PD-1 inhibitor Keytruda was well tolerated at all doses tested and elicited neoantigen-specific T cell responses.

The vaccine is currently in a Phase II clinical trial in melanoma patients ( NCT03897881 ).

BioNTech’s BNT122 has explored the efficacy and safety of combination therapy with PD-L1 antibodies, with Phase II clinical trials in melanoma, non-small cell lung cancer and colorectal cancer initiated in the first half of 2021.

Theoretically, mRNA cancer vaccines can encode any protein, including immune stimulators, which can reshape the tumor immune microenvironment ( TIME ) and overcome tumor immune tolerance, which has become an important direction of mRNA tumor vaccine research。

In the past few years, clinical trials of cancer vaccines with cytokine-encoding mRNAs have been conducted.

Currently, there are only seven product candidates in clinical trials, and they belong to Moderna and BioNTech.

In 2017, Moderna developed the first immunostimulant expressing mRNA encoding ( mRNA-2416 ), which encodes OX40L, and a Phase 1 clinical trial ( NCT03323398 ) evaluated the safety and resistance of mRNA-2416 alone and in combination with durvalumab acceptability.

Available data suggest that mRNA-2416 monotherapy is tolerable at all dose levels, with no reported dose-limiting toxicities and most associated adverse events of grade 1 or 2.

More importantly, broad pro-inflammatory activity and beneficial changes were observed during the time of PD-L1 upregulation.

Another mRNA vaccine, mRNA-2752 , encodes OX40L/IL23/IL36γ, and early clinical results show that mRNA-2752, in combination with the anti-PD-L1 antibody durvalumab, was well tolerated at all doses and showed anti-PD-L1 Signs of tumor activity.

In addition, BioNTech has developed BNT131, encoding IL-12sc, IL-15sushi, GM-CSF and IFNα , as monotherapy or in combination with cemiplimab in patients with advanced solid tumors.

Over the decades, advances in mRNA design and nucleic acid delivery technology, coupled with the discovery of neoantigen targets, have made mRNA vaccines a powerful tool in the fight against cancer.

The advantages of mRNA vaccines are reflected in the ability of mRNA cancer vaccines to encode multiple antigens simultaneously, as well as the potential for non-integration, high degradation, and no insertional mutagenesis.

The mRNA produced by IVT is free of cellular and pathogenic viral components and has no potential for infection; most mRNA vaccines tested in ongoing clinical trials are generally well tolerated with few injection site-specific immune responses.

Rapid production is another advantage of mRNA cancer vaccines, and the maturity of mRNA manufacturing technology allows novel vaccines to be produced in a short period of time. The recent discovery and identification of neoantigens has facilitated the development of personalized vaccine treatments.

There is reason to believe that mRNA therapy will have the potential to transform modern medicine’s approach to vaccination and cancer immunotherapy.