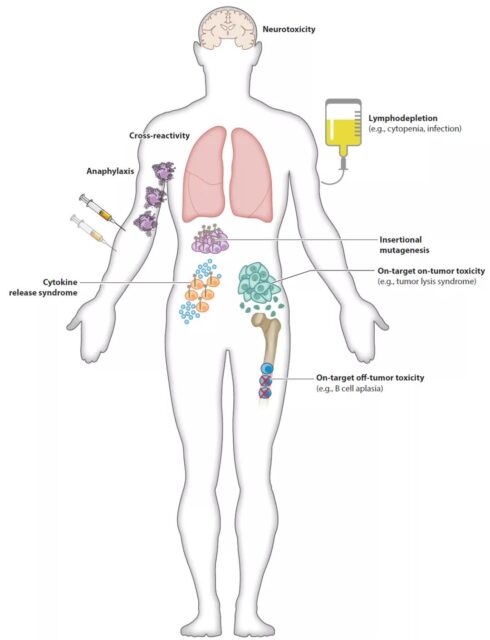 The definition of cytokine release syndrome (CRS) is the rapid activation of a large number of immune cells, leading to high levels of systemic inflammatory cytokines, which in turn cause body damage. It is one of the main side effects associated with CAR-T cell therapy.

Typically, CRS occurs on the 2nd to 14th days after CAR-T cell treatment, and the subsequent time is sufficient for CAR-T cells to expand, circulate to the tumor site and perform their initial effector functions, including the production of cytokines. CRS rarely occurs more than 2 weeks after CAR-T cell infusion, and usually resolves within 2 to 3 weeks after the onset of CRS. CRS has high levels of serum cytokines and inflammatory markers, especially IL6, IFN-γ, ferritin and C-reactive protein.

Clinically, symptoms include high fever and flu-like symptoms, which can develop into hypotension, capillary leakage, hypoxia, and multiple organ dysfunction.

The management of CRS usually involves the use of active supportive treatment, including antipyretic, analgesia, supplemental oxygen and intravenous fluids, and direct measures to weaken immunity (moderate to severe). IL-6 monoclonal antibody (tocilizumab) is used in clinical practice. It is widely used. Corticosteroids are also widely used, but theoretically they may affect the effect of anti-tumor CAR-T cells.

The term used previously was CAR-T-related encephalopathy syndrome (CRES). However, after the publication of the new ASTCT consensus recommendation report in 2019, the term ICANS (Immune Effector Cell Associated Neurotoxic Syndrome) was adopted. As compared with CRS, ICANS has a different time and response to intervention.

For ICANS, ASTCT also has clinical scoring standards, as follows 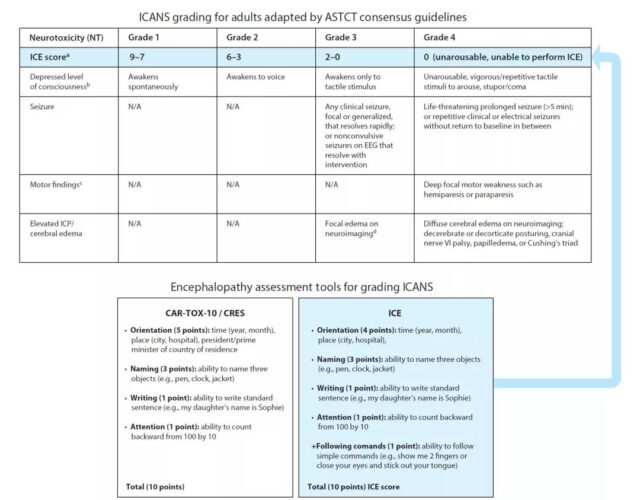 Fludarabine and cyclophosphamide are the most commonly used regimens, and their toxicity includes neutropenia, leukopenia, anemia, and thrombocytopenia. They also increase the chance of infection. Its duration may vary significantly depending on the condition of the previous treatment and the patient’s hematopoietic reserve function.

Long-term neutropenia, that is, the CAR-T cell injection lasts for more than 3 weeks. After any cytokine release syndrome (CRS) is resolved, the use of myeloid cell growth factor can be considered.

Non-tumor targeted toxicity is usually caused by the target being a shared target, which is also expressed in normal tissues and will be recognized and attacked by CAR-T. This type of side effect is more common in CAR-T, and its severity is related to the expression and criticality of the target in normal tissues.

CAR-T recognizes the toxicity caused by tumor cell target molecules. The rapid destruction of a large number of tumor cells, as their contents are suddenly released into the blood, will cause metabolic disorders and affect organ functions. This phenomenon is called tumor lysis syndrome.

Although not common, tumor lysis syndrome has been reported in patients with chronic lymphocytic leukemia and B-ALL.

Most CARs currently in clinical use use mouse-derived scFv sequences for antigen recognition. The patient’s immune system may recognize that the components of these mice are foreign, which can trigger the risk of allergic reactions, especially when CAR-T cells are used repeatedly. Allergic reactions require continuous observation, rapid diagnosis and treatment. Immune response will reduce the durability of CAR-T.

With the use of more and more whole-person scFv, this type of risk will be reduced.

Because CAR is a genetically modified product, theoretically there is a certain possibility of insertion mutation. However, according to current observations, this side effect has basically not occurred. At present, safer methods such as transposons have also begun, and clinical trials of gene transduction are underway.

CAR-T treatment will produce related immune cell treatment side effects. In addition to the well-known cytokine release syndrome (CRS) and neurotoxicity, it is also necessary to consider the side effects (such as infections), off-target effects, and non-target effects caused by Qinglin itself.

Tumor targeting, or tumor lysis syndrome caused by tumor lysis may also endanger the life of the patient. As a genetically modified product, allergic reactions and the possibility of potential insertion mutations also need to be considered.