As early as 1960-1970, Aina Muceniece, a Latvian scientist, discovered that the ECHO-7 virus, which is most often found in the small intestine of healthy children, can destroy and eliminate cancer tumors.

It is a pity that this major discovery was not accepted by most physicians at the time. The blame is that most physicians still have very negative stereotypes about viruses, and the R&D technology at that time still has its own characteristics. Difficulties.

However, the medical team led by Aina Muceniece did not give up on realizing the ideal of anti-cancer with viruses, and continued to promote clinical trials in vitro and in vivo.

Among them, more than two thousand cancer patients received treatment, almost No cancer patient has had clinically serious side effects, or even no side effects. This success in the medical industry finally succeeded in applying for registration in Latvia in 2004, becoming the first government in the history of the country and the world. Agency-approved oncolytic virus (Virotherapy).

Among all our anti-cancer medical methods, Virotherapy is a new therapy.

The principle of this therapy is that oncolytic virus (Oncolytic Virus) that has been attenuated in the laboratory is targeted for specific search targets (Targeting) to infect cancer cells (Oncoselective infection), and it starts to replicate in cancer cells (Replication). ), and then release the signal, activate the immune mechanism in the body, and finally carry out oncolysis to kill cancer cells. 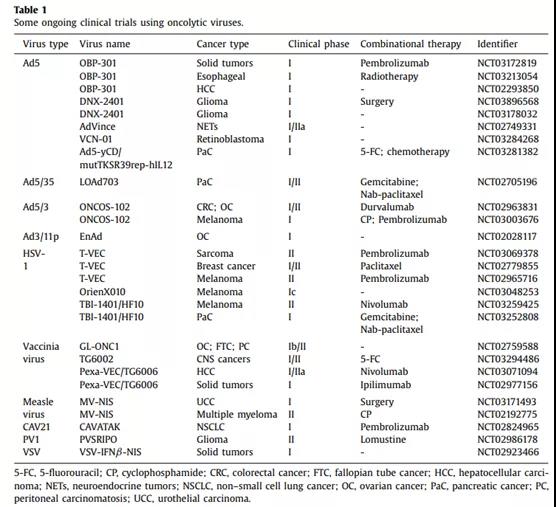 The advantages of oncolytic virus therapy have obvious advantages over traditional radiotherapy, chemotherapy, and surgery: it does not damage normal cells, tissues and organs, has almost no toxic side effects, and specifically kills cancer cells or inhibits tumor growth. At present, the most studied oncolytic viruses include adenovirus, herpes simplex virus (HSV) and so on.

Adeno-associated virus (AAV) is a type of small, single-stranded DNA virus with no envelope and icosahedral structure. Compared with adenovirus, AAV has good safety, wide host range, low immunogenicity, and expression in vivo The long time and other characteristics of foreign genes are regarded as one of the most promising gene transfer vectors.

It is derived from the hybridization of two adenovirus serotypes Ad2/Ad5. The virus also knocks out the E1B-55K and E3B genes. It is the first genetically engineered replication-selective virus to be used in humans.

Herpes Simplex Virus (HSV) is the first virus to be used to treat tumors. The virus genome is easy to manipulate and can carry foreign genes. HSV is a DNA double-stranded virus that can encode 84 different polypeptides.
The herpes simplex virus DNA contains two specific sequences: the long sequence (UL) and the short sequence (US). The two sequences are separated by terminal repeats. Type I HSV (HSV-1) is more commonly used. Because of its high solubility, it widely infects human tumor cells. It is mainly killed by necrosis and becomes an effective activator of innate and adaptive immunity. Therefore, it was selected as a solvent in this study. Tumor immunotherapy for further development.

HSV-1 also has the ability to insert other potentially therapeutic foreign genes. Finally, HSV-1 has proven safety and effectiveness in cancer patients, talimogene laherparepvec (T-VEC) is an oncolytic HSV-1 expressing GM-CSF, and is the only oncolytic immunotherapy approved by the FDA .

It is a double-stranded DNA virus with a genome of about 190kbp. It is a very large DNA virus. The difference between vaccinia virus and other viruses is that vaccinia virus has two forms, IMV without envelope and EEV with envelope.

Advantages: the replication speed is very fast; the genome is not integrated into the host cell chromosome and will not cause insertional mutagenicity; the genome is large, and a large number of foreign genes (expression therapeutic agents) can be inserted.

The modified VV deletes the adenosine kinase gene and can selectively and continuously replicate in tumor cells without damaging normal cells. Due to the low oncolytic efficacy of VV, current research has begun to turn to how to enhance the anti-tumor activity of the virus.

In addition, Pexa-vec (JX-594) is derived from the vaccinia vaccine, which has been used as a vaccine in healthy people for decades. pexa-vec is also designed to express GM-CSF factor, which can activate the systemic immune response and kill tumor cells throughout the body.

This oncolytic immunotherapy is designed for:

3) Selectively target vascular tumors, thereby quickly reducing tumor blood flow. pexa-vec takes advantage of the unique characteristics of vaccinia, including its invisible cell envelope form, which allows the virus to survive in the bloodstream in the presence of neutralizing antibodies, thereby enabling it to be injected intravenously (IV) and intratumorally at the same time Injection (IT).

Newcastle disease virus (Newcastle disease virus, NDV) is a member of the genus Paramyxoviridae avian leg adenovirus. It is a single-stranded negative-strand RNA virus with a full-length genomic RNA of about 15 kb. The RNA genome has a 55-nucleotide leader sequence at the 3’end and a 114-nucleotide trailing sequence at the 5’end. These two sequences are essential for virus transcription and replication.

The sequence of the six gene RNAs of the virus is 3′-NP-P-M-F-HN-L-5′. These six genes of Newcastle disease virus encode six main structural proteins:

Arming the virus by inserting various foreign genes or combining NDV with immunotherapy can also improve the ability of NDV against CRC (colorectal cancer), and good results have been achieved in animal models and clinical treatment trials.

Coxsackie virus is a common type of virus that infects humans through the respiratory and digestive tracts. There are 30 known serotypes of Saatchi virus. According to the pathogenic characteristics of the virus to suckling mice and the sensitivity to cells, the viruses are divided into groups A and B. Group A viruses have 24 serotypes, namely A1-A24; Group B viruses have 6 serotypes B1- B6. Different serotypes have different antigenicity and cause different diseases.

It has the potential to treat melanoma, prostate cancer, lung cancer, and bladder cancer. Its indication for the treatment of advanced melanoma was awarded the US FDA “Orphan Drug Designation” in December 2005. In the phase Ib clinical trial that has announced the results, CVA21 combined PD-1 antibody K drug treatment of advanced malignant melanoma, 23 volunteers were enrolled: the effective rate was 61%, the disease control rate was 78%, and the efficacy of 6 patients had been maintained for more than 1 year.

CVA21 is used alone to treat lung cancer and bladder cancer. Small-scale data suggest that the effective rates are 30% (3/10) and 28% (5/18), respectively, and the safety is good (the incidence of grade 3-4 adverse reactions is only 11%). Coxsackie virus type B3 (CVB3) is another important oncolytic Coxsackie virus.

Studies have shown that, due to the overexpression of decay-promoting factors and Coxsackie-Adenovirus Receptor (CAR), CVB3 also has a natural tropism for cancer cells, especially non-small cell lung cancer cells. The anti-cancer activity of CVB3 depends on its ability to induce apoptosis. The PI3K/AKT signaling pathway can accelerate CVB3 replication79, and since this pathway is activated in most cancers, CVB3 replicates selectively in these cancer cells.

However, only a small amount of CD46 may be expressed on the surface of some tumor cells, and they need alternative infection receptors. Therefore, researchers modified the measles virus vaccine strain to express a variety of ligands on the virus surface, including epidermal growth factor receptor, insulin-like growth factor 1 receptor, CD38, CD20, and single-chain T cell receptors.

These modified measles virus vaccine strains can bind to and enter cells through recombinant receptors. However, its effect on tumor treatment still needs further research. Researchers hope that they can more effectively locate in the tumor cavity through the bloodstream and inhibit tumor growth. 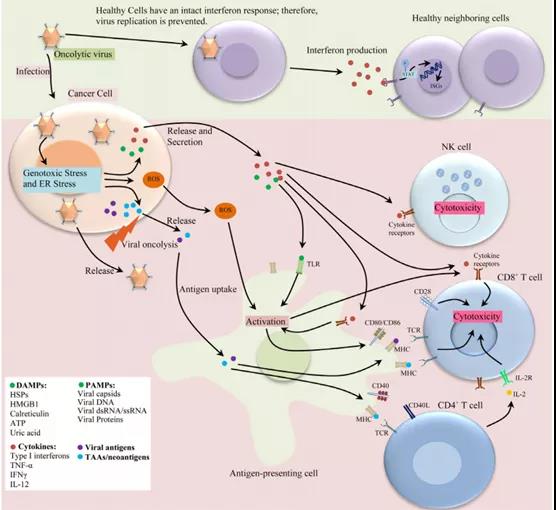 Although a single dose of oncolytic immunotherapy has shown clinical activity, researchers have found that the combination of oncolytic virus therapy and immune checkpoint inhibitors can further enhance the therapeutic effect. This potential has also been verified in clinical trials.

Studies have found that both PD-1 inhibitors and CTLA4 inhibitors, when combined with Imlygic, can increase the number of CD8 and CD4 positive T cells in patients, indicating that it may have a systemic immune effect.

The hTERT gene promoter activity has been shown to be upregulated by hypoxia. It is speculated that under hypoxic conditions, the anti-tumor efficiency of OBP-301 adenovirus with hTERT promoter will be higher than that of wild-type adenovirus type 5 (AD5).

Assuming that other problems are solved, there is still a question: Which patients are suitable for treatment? No reliable predictive biomarkers have been identified that can predict patients who are expected to respond to oncolytic virus therapy.

On the other hand, due to the experimental nature of most OVs, patients undergoing oncolytic virus therapy usually have gone through many cycles of conventional cancer treatment, so compared with the original form, their immune system has been destroyed and tumors have undergone fundamental changes.