Progress of EGFR allosteric inhibitors for non-small cell lung cancer.   Lung cancer is the second largest cancer in the world, with a high prevalence and fatality rate, accounting for about one-third of the total number of cancer-related deaths each year.

EGFR plays an important role in a variety of cell signaling pathways for cell survival and proliferation, migration, angiogenesis and cell death. 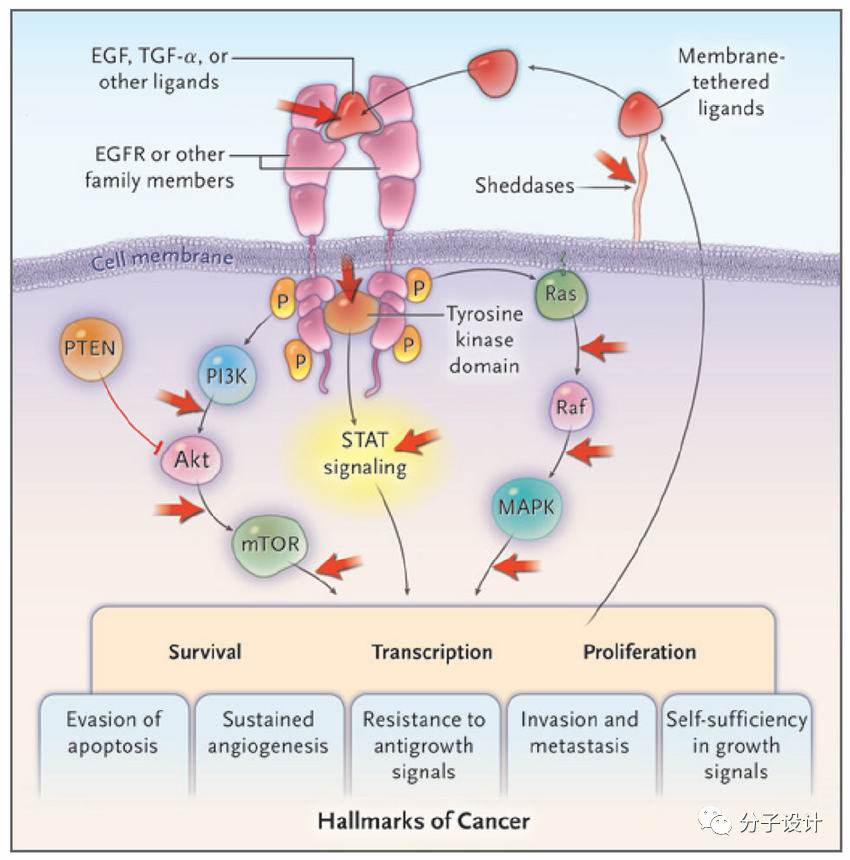 Mutations in the catalytic domain of EGFR will mediate higher kinase activity and ligand independence, such as L858R (single nucleotide substitution in exon 21) and deletion of exon 19 (delE746-A750) in the EGFR coding gene. ), which leads to the beginning and progression of cancer. NSCLC is one of its mutation-induced cancers.

Gefitinib and erlotinib are currently used for the first-line treatment of NSCLC. But after a few months of treatment with these drugs, NSCLC cells developed drug-resistant secondary point mutation T790M. Compared with other carcinogenic mutations, the T790M mutation increases the affinity for ATP, which makes it difficult for existing drugs to bind.

In order to treat patients with drug-resistant NSCLC mediated by the T790M mutation, researchers designed and developed second-generation EGFR-TKIs that covalently bind to the cysteine ​​(Cys797) residues on the EGFR ATP binding site.

Unfortunately, due to targeted dose-dependent toxicity and severe side effects, the efficacy of second-generation EGFR inhibitors at the clinical level is limited. Considering these issues, researchers have developed a third-generation selective and irreversible EGFR inhibitor against mutants.

These inhibitors mostly target the ATP binding pocket of the T790M mutant EGFR and form a covalent bond with Cys797 to overcome the resistance of patients with T790M mutant NSCLC. Although the initial efficacy is impressive, the sensitivity of third-generation EGFR-TKIs is greatly reduced due to the C797S mutation at the edge of the EGFR ATP binding pocket.

At present, the first to third generation inhibitors of EGFR are all designed for the ATP binding site of the EGFR-TK domain. Therefore, it is necessary to find compounds that bind to other sites to overcome the T790M and C797S mutation-mediated effects on EGFR. -TKIs resistance.

In recent years, the fourth generation of EGFR allosteric inhibitors can bind to allosteric sites other than the ATP binding pocket and become a treatment option for mutant NSCLC.

Preliminary studies of these allosteric inhibitors have shown that although they are weak or ineffective when used alone, the combination therapy can exert full efficacy.

Stanley Cohen of Vanderbilt University won the Nobel Prize for his discovery of epidermal growth factor (EGF) and its receptors. Research on molecules that can inhibit tyrosine kinases began in the 1960s. So far, researchers have designed/discovered four generations of small molecule EGFR-TKIs.

Erlotinib and Gefitinib are the most important two of the first-generation EGFR-TKIs and have been approved by the U.S. Food and Drug Administration (FDA) for the treatment of patients with advanced NSCLC. Erlotinib and gefitinib can reversibly bind to the tyrosine kinase domain of EGFR and inhibit the activation of EGFR and its subsequent downstream signaling pathways.

Due to dose-dependent side effects, such as skin rash and gastrointestinal diseases, the further clinical application of second-generation EGFR-TKIs is limited. Most third-generation EGFR-TKIs are designed to irreversibly target the T790M mutant EGFR, such as osimertinib, rociletinib, and olmutinib, but are affected by the ATP binding pocket C797S is mutated and resistant. recently.

2. EGFR allosteric inhibitor for the treatment of T790M/C797S NSCLC 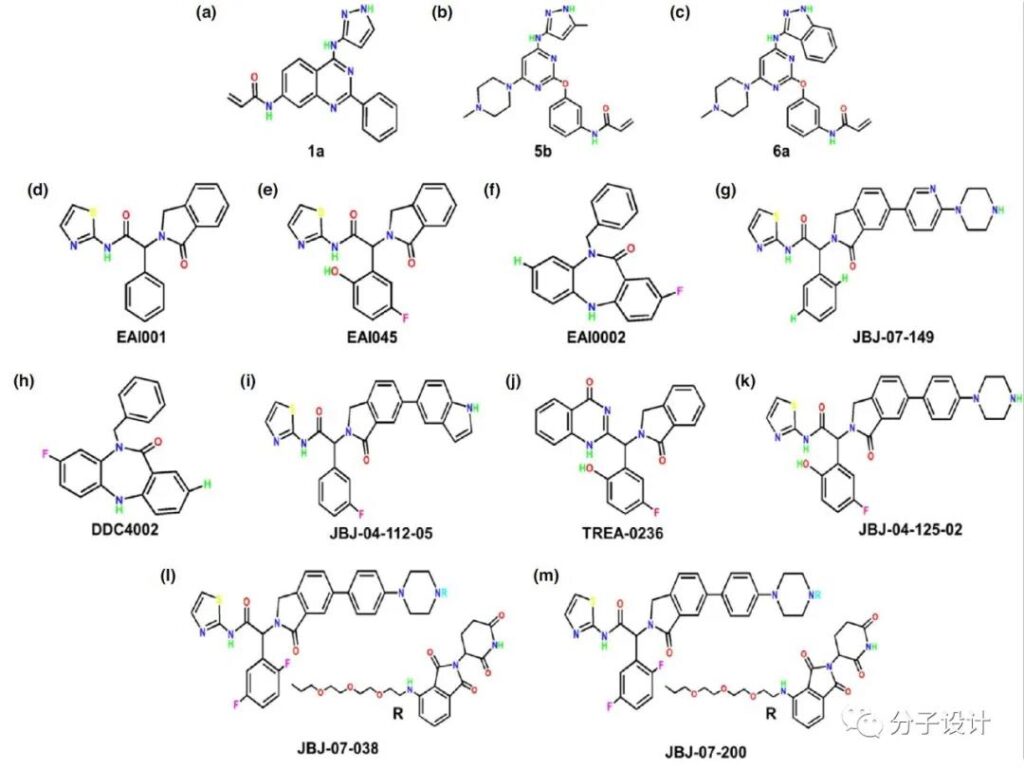 L858R/T790M and C797S mutations caused the EGFR-TK resistance problem, which promoted the discovery of the fourth generation of EGFR-TKIs. Tyrosine kinase receptors have three binding sites: inactivation site, ATP competition site and allosteric site. Because the ligand or drug cannot bind to the inactivation site, it is impossible to use this as a target; the ATP binding site is currently the binding site of the first to third generation EGFR-TKIs; therefore, the allosteric site is to overcome the mutation Where the hope lies.

In the initial search for allosteric inhibitors, Engel et al. performed phenotypic screening on 80 NSCLC cell lines and obtained compound 1a that specifically inhibits the drug-resistant H1975 cell line (L858R/T790M). The researchers also designed, screened and optimized a series of new inhibitors, from which 5b and 6a were screened. Jia et al. used the purified target protein L858R/T790M EGFR kinase for biochemical screening and found a non-ATP-competitive fourth-generation EGFR allosteric inhibitor (EAI001).

Similarly, for the basic structure of EAI001, Dries developed EAI002, which showed that mutant EGFR has good selectivity compared to wild-type EGFR. With the development of PROTAC technology, a new EGFR mutant (L858R/T790M), a selective allosteric degrader JBJ-07-149, obtained by chemical modification of EAI001, has an in vitro IC50 = 1.1 nM.

3. The pharmacokinetics of EGFR allosteric inhibitors

Preclinical studies have shown that the fourth-generation EGFR allosteric inhibitor EAI045 has satisfactory stability, bioavailability, excretion and tissue distribution. Jia’s pharmacokinetic analysis of EAI045 shows that in a mouse model, the maximum blood concentration of the drug when taken orally at 20 mg/kg is 0.57 μM, the half-life is 2.15 h, and the oral bioavailability is 26%.

The plasma analysis of oral (30 mg/kg) and intravenous (2 mg/kg) EAI045-treated mice showed that the average 24-hour plasma concentration (Cmax/C5 min) was approximately 1275.802 ng/mL and 1831.146 ng/mL, respectively. The important thing is that EAI045 is rapidly absorbed in various tissues and distributed widely, and the liver is the main organ of its metabolism. In contrast, the recently developed EGFR allosteric inhibitor JBJ-04-125-02 has stronger anti-proliferative activity than EAI045.

JBJ-04-125-02 intravenous injection of 3mg/kg, the half-life of 3 hours is medium, the high area under the curve is 728577 min-ng/mL, but the maximum oral plasma concentration of the compound (20 mg/kg body weight) is 1.1 mmol/L, and the bioavailability is only 3%, suggesting that the compound may begin to accumulate in the patient’s plasma.

If EGFR allosteric inhibitors are to be used as anti-lung cancer drugs, more pharmacokinetic studies are needed.

EGFR allosteric compounds EAI001 and EAI045 can overcome the enhancement of ATP affinity mediated by the T790M mutation, and may reduce the autophosphorylation of the T790M mutant EGFR. These compounds bind to the allosteric site of the kinase and provide the stability of the tyrosine kinase domain by turning the regulatory C-helix outward. In preliminary preclinical studies, EAI045 showed good targeting selectivity for L858R/T790M/C797S mutant EGFR.

EAI045 has anti-proliferation effect on L858R and L858R/T790M mutant Ba/F3 cells, but has no effect on T790M/exon19del or parental Ba/F3 cells. These results confirm that EAI045 is more selective for mutant EGFR than wild-type EGFR. However, the half of the antiproliferative effect of EAI045 on H1975 and H3255 cell lines requires a concentration of approximately 10 μM, which is much higher than the in vitro IC50 dose.

In terms of in vivo efficacy, EAI045 did not show significant tumor regression in L858R/T790M mutant and L858R/T790M/C797S mutant lung tumor xenograft mice. These findings indicate that EAI045 has limited clinical efficacy as a single drug in the treatment of patients with EGFR-mutant NSCLC.

In vitro and in vivo studies have shown that the use of EGFR allosteric inhibitors as a single therapeutic agent for the treatment of non-small cell lung cancer may not be so effective. In this case, the allosteric EGFR inhibitor as a combination therapy provides an effective treatment option for NSCLC. In L858R/T790M mutant Ba/F3 cells, although the combination of EAI045 and cetuximab (10 mg/mL) is ineffective, it has a synergistic blocking effect on EGFR dimerization and has an anti-proliferative effect (IC50 = 10 nM). ).

EAI045 almost meets all the criteria required for an ideal combination chemotherapy regimen, such as the selectivity of EGFR mutants to wild-type, and the synergy when used in combination with cetuximab.

Another EGFR allosteric inhibitor JBJ-04-125-02 combined with Ositinib is being used to treat EGFR-mediated mutational resistance in non-small cell lung cancer. In osimertinib (0.1 μM) drug-resistant lung cancer cell line (H3255GR), the combined use of 1-10 μM JBJ-04-125-02 significantly increases the pro-apoptotic ability and curative effect of osimertinib. In addition, the combined treatment of JBJ-04-125-02 (100 mg/kg) and osimertinib (2.5 mg/kg) has a much greater inhibitory effect on tumor growth in xenograft mouse models than the two drugs alone.

Similarly, the recently developed allosteric EGFR degradant DDC-01-163 (0.01 μM and 0.1 μM) synergistically enhances the anti-proliferation and apoptosis ability of osimertinib (0.01 μM) at a certain dose. When allosteric inhibitors are used in combination with traditional drugs, a significant synergistic effect can be observed, that is, the therapeutic potential of allosteric drugs. This indicates that allosteric EGFR inhibitors may enhance the clinical efficacy of traditional EGFR-TKIs in the treatment of EGFR-mutant NSCLC.

This requires more preclinical and clinical studies to verify the effect of allosteric EGFR inhibitors as a combination therapy for non-small cell lung cancer.

Although the therapeutic effect of EGFR-TKIs (first generation to third generation) has been substantially improved, they still cannot bring sufficient therapeutic relief to NSCLC. EGFR mutations (T790M and/or C797S) lead to the loss of the ability of EGFR-TKI to bind to the EGF receptor, leading to inevitable resistance.

The results of the study show that the allosteric site of epidermal growth factor receptor has the potential to inhibit the proliferation of cancer cells. At the same time, targeting EGFR allosteric sites provides an efficient and selective new treatment strategy for the treatment of EGFR mutant NSCLC.

The T790M and C797S mutations in the active site of EGFR do not affect the efficacy of EGFR allosteric inhibitors because they target the allosteric site of EGFR, which occurs outside the ATP binding site.

However, these inhibitors are currently in the development stage, and due to receptor dimerization, they are not particularly effective as a single drug for EGFR mutant NSCLC.

In this case, the combined use of EGFR allosteric inhibitors and conventional chemotherapy or immunotherapy is an efficient strategy to overcome EGFR mutation-induced NSCLC resistance.

Existing studies have shown that the combined treatment of EGFR allosteric inhibitors and chemotherapy or immunotherapy is more effective than using these two drugs alone.

Finally, the prospect of combined therapy of EGFR allosteric inhibitors is rapidly emerging; however, more preclinical and clinical studies are needed to further confirm their combined treatment of EGFR mutant-resistant NSCLC patients.