50% Mortality rate: Rare fungus found in survivors of COVID-19 in India . “Just as India is approaching the terrible’milestone’ of 10 million confirmed cases of COVID-19s, a new rare disease, mucormycosis, is spreading throughout India.” According to a report from the Russian Satellite News Agency on the 18th, pathogenic fungal infections. —— Mucormycosis is spreading rapidly in many parts of India, and most of the patients are COVID-19 patients who are in the recovery period. At present, the disease has caused at least 9 deaths, and more than 100 people are receiving treatment in the hospital. 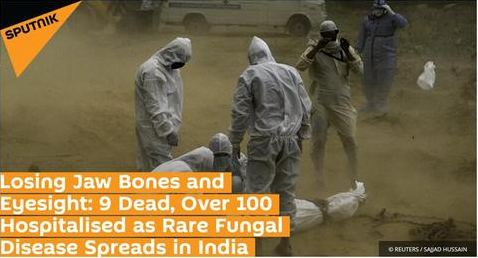 According to the report, relevant departments in the northern and western states of India have issued alarms after the relevant cases were reported in local hospitals.

“Since early reports of this rare disease spread through various channels, including the media, more and more people have contacted hospitals. So far, more than 100 people have been affected by this black fungus in different hospitals in Delhi alone. The infection is treated.” Manish Munjal, a senior consultant at a Delhi hospital, told the Russian Satellite News Agency.

It is worth noting that, according to the report, Monjar said that most of the mucormycosis patients currently found in India are patients with COVID-19s who are in the recovery period, but at the same time, they have also found some infections in non-COVID-19 patients. Cases of fungus. Doctors also said that the mortality rate of mucormycosis triggered by the new coronavirus is 50%.

Monjar added: “Congestion of the nose, red and swollen eyes or cheeks, and black dry scabs on the nose are early symptoms of infection (this disease). These signs suggest that a biopsy should be performed immediately in the outpatient department and antifungal treatment should be started as soon as possible. “

According to public information, mucormycosis is a type of conditional pathogenic fungal disease caused by mucor, and it is a serious fungal infection.