qSOFA is used to identify sepsis in infected patients

qSOFA is used to identify sepsis in infected patients. Sepsis mainly refers to the imbalance of the body’s response to infection, causing life-threatening organ dysfunction. It is one of the most important causes of death in ICU patients. The fundamental goal of diagnosis and treatment of sepsis is to diagnose early and accurately, identify high-risk groups with poor prognosis, and improve survival. 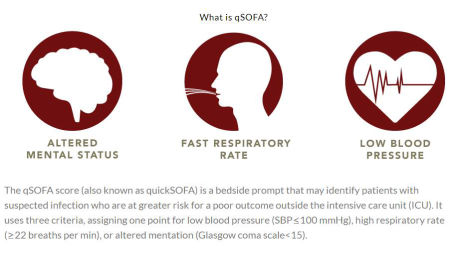 It is very important to clearly diagnose whether a patient has sepsis in clinical treatment. As long as the diagnosis is timely, and appropriate and effective treatments, the survival rate of patients will be greatly improved. Unlike some life-threatening diseases (such as myocardial infarction), there are currently no quick diagnostic indicators to diagnose patients with sepsis and those who are likely to develop sepsis, thereby helping clinicians determine the best treatment plan .

The detection method of sepsis involves many key questions, such as whether the pathogenic bacteria of sepsis is one or more; whether there are sepsis of different severity; which detection method is the best standard; what accuracy level can be achieved Used in clinical practice; which marking method is the most cost-effective and effective test. Clinicians must rely on clinical judgment, and it is possible to use clinical criteria to determine whether infected patients have sepsis.

In 2016, sepsis was redefined as a life-threatening organ dysfunction syndrome caused by the host’s unregulated response to infection.

With the introduction of this new concept of sepsis, members of the 3rd International Consensus on Sepsis and Septic Shock (Sepsis-3 Working Group) proposed a simple scoring standard-qSOFA derived from clinical experience (Rapid sequential [sepsis-related] organ failure assessment), this standard will help clinicians identify patients with sepsis and those who may develop sepsis among infected patients. In order to develop this scoring system, Seymour et al. and the Sepsis-3 Working Group analyzed the databases of several major hospitals and selected patients with suspected infections (using antibiotics and body fluid cultures at the same time within a specific time window).

Based on the above available clinical data, the members of the working group determined the simplest judgment model. By judging whether the baseline risk is exceeded, the suspected sepsis can be distinguished, which may cause sepsis, may not be sepsis, and it must not be. Patients with sepsis.

When determining that there is an optimal standard for a disease or symptom, you can specify true positive, false positive, and false negative, and calculate traditional indicators such as sensitivity and specificity. When there is no optimal standard, it is impossible to clearly indicate negative and positive. On the contrary, the value of a test must be evaluated through the performance of different aspects such as validity, reliability and usefulness.

The main method of evaluating qSOFA is the effectiveness of prediction. Specifically, Seymour et al. have discussed the predictive degree of qSOFA and other more complex measures, that is, the extra mortality rate beyond the baseline risk explanation or the length of stay in the intensive care unit (ICU).

These results are tested because if sepsis is different from simple infections, including infections caused by organ dysfunction and increased life threats, then patients with sepsis should be more likely to die or increase the length of ICU hospitalization than ordinary infected patients .

After verification by 4 sets of external data sets and multiple sensitivity analysis, the final qSOFA model includes 3 parameters: Glasgow coma score is less than 15 points (1 point), systolic blood pressure is less than or equal to 100 mm Hg (1 point), and respiratory rate is greater than 22 times/min (1 minute).

In patients with infection outside the ICU, qSOFA has a better predictive effect on the outcome of sepsis than the test indicators that require more clinical and laboratory variables (SOFA 3 and logical organ dysfunction system). However, in ICU-infected patients, the predictive validity of qSOFA is poor.

Controversy over the new definition of sepsis and qSOFA has been endless. The measurement characteristics of qSOFA have attracted a lot of attention. Two studies published in the Journal of the American Medical Association, although clearly focused on prognosis (predicting the outcome, regardless of the cause of the outcome), rather than diagnosis (determining the disease or condition, which is the original intention of qSOFA), they provide a Opportunities to re-examine qSOFA and its measurement attributes inside and outside the ICU.

Because too many patients in the world are at risk of sepsis, and the assessment of sepsis may occur in the outpatient department, emergency department (ED), or during hospitalization, understand whether qSOFA is a good measure of this Points are crucial.

Freund et al. evaluated the predictive effectiveness of qSOFA in prospective studies of emergency patients in France, Switzerland, Spain, and Belgium. Among 879 patients (average age 67, 379 respiratory infections, and hospital mortality rate of 8%), 30 emergency department suspected infections occurred. Researchers confirmed that the predictive effectiveness of qSOFA in the ED environment and the full SOFA score Similarly, adding lactate does not improve the validity of predictions.

The study also questioned the applicability of qSOFA in the ED environment, because although it only relies on 3 simple parameters, 14% of selected patients were excluded from the analysis due to lack of values.

In another report, Raith et al. evaluated the predictive effectiveness of qSOFA in a retrospective analysis of the internationally recognized Australian and New Zealand Institute of Intensive Care (ANZICS) adult patient database. In 184 875 patients with initial diagnosis of infection-related diagnosis (average age 62.9 years; the most common diagnosis was bacterial pneumonia [17.7%]; hospital mortality 18.7%) who were admitted to 182 ICUs within 16 years, the authors confirmed that qSOFA is effective in ICUs. The prediction validity is lower than the full SOFA score.

Considering that Seymour et al. have reported this finding in their initial work, it is not surprising that qSOFA does not perform as well as the SOFA score in the ICU. This is not important, because the role of qSOFA outside the ICU environment may be more important. Big.

Therefore, the results of these two studies support the results of Seymour et al., that is, qSOFA may help to quickly identify patients with suspected infections, such as those who have or may develop sepsis, in an environment outside of the ICU. However, qSOFA still needs to be further confirmed, especially in low- and middle-income areas (for example, the time for patients with suspected infection to go to the hospital) may have considerable differences. This background factor may affect the validity of the prediction.

Repeated measurements during hospitalization can also assess the long-term effects of qSOFA. It should be said that any verification of the highest quality evidence that supports clinical decision-making should come from analysis to determine whether decisions made with the support of this tool can lead to better prognosis for patients than decisions made solely on clinical judgment. When more accurate and rapid testing methods for the diagnosis of acute sepsis emerge, the practicality of qSOFA will be surpassed.

So far, for patients outside the ICU in high-income areas, if there is suspected or possible sepsis, qSOFA has been proven to be a simple, cheap, fast, and effective testing method.

Sepsis mainly refers to the imbalance of the body’s response to infection, causing life-threatening organ dysfunction. It is one of the most important causes of death in ICU patients. The fundamental goal of diagnosis and treatment of sepsis is to diagnose early and accurately, identify high-risk groups with poor prognosis, and improve survival.

Relevant domestic and foreign literature has confirmed that early resuscitation of sepsis is beneficial to improve the prognosis of patients, and early and effective screening is extremely important for reducing the risk of death of patients. Due to the individual differences in patients and the complex and diverse clinical manifestations, there has been no specific early diagnosis of sepsis.

The qSOFA score is currently one of the early diagnosis tools for emergency sepsis recognized at home and abroad. It has early warning value for patients outside the ICU to identify sepsis early, but it does not mean that it is possible to determine which types of patients can benefit from specific sepsis. Treatment, and there are still many controversies, further prospective studies and verification of its practicality in different populations are needed.