Androgen therapy for breast cancer hopes to reappear. The latest research shows that male hormones are beneficial to the treatment of breast cancer, so what is the research like?

According to a report by the American Cancer Society, breast cancer is one of the most common diseases among women. It is highly aggressive and occupies the second place among women’s cancer-related deaths. Scientists are committed to finding ways to prevent and treat breast cancer. The latest study seems to be a reversal of the treatment that was considered to be more harmful than good.

Researchers estimate that nearly 2 million people in the United States will be diagnosed with cancer in 2020. About 15% of these cases are invasive breast cancer. Invasive breast cancer can invade surrounding tissues, while non-invasive forms stay in breast ducts or breast lobules, making it easier to treat. In the United States, every woman has an eighth chance of being diagnosed with breast cancer in her lifetime, and 1 in 39 women will die of this disease.

Both males and females have both male and female hormones. These hormones play an important role in physical development.

Male hormone levels are higher than females, and they affect male sexual development to a large extent.

If the level of estrogen is too high, it will cause problems such as male sexual dysfunction. Women have higher estrogen levels than men. With the onset of puberty, the ovaries produce more estrogen, leading to characteristic physiological changes, including breast development. Estrogen plays the “main role” described by some experts in promoting the development of breast cancer.

There are many types of breast cancer, including ER-positive breast cancer. This shows that estrogen is a factor in the growth of cancer cells. In fact, most breast cancer cases are ER positive. The current treatment methods include surgical resection, chemotherapy, radiotherapy and hormone therapy. The latter is usually used to lower estrogen levels.

According to a paper published in the American Journal of Cancer Research, androgen therapy was studied in the first half of the 20th century. But when scientists determined that “androgens can be converted into estrogen,” doctors stopped using breast cancer. 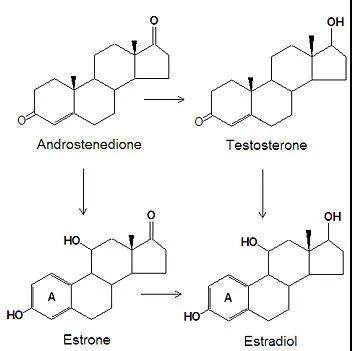 Estrogen can be transformed from androgens (picture from chinanet)

This led researchers to believe that androgen therapy may do more harm than good, because the increase in estrogen is related to breast cancer.

However, in a study recently published in “Natural Medicine”, researchers decided to re-study androgens.

Studies have found that androgens may help fight breast cancer. This study came from the University of Adelaide, Australia, and they studied the effects of androgen receptor activating drugs on cell cultures and mouse models of breast cancer.

Researchers describe the androgen receptor as “a tumor suppressor for [ER-positive] breast cancer.” “This work has a direct impact on women with metastatic [ER-positive] breast cancer, including those who are resistant to current forms of endocrine therapy,” the lead author of the paper and Dame Roma Mitchell, University of Adelaide Said Dr. Theresa Hickey, the leader of the Cancer Research Laboratory.

Androgen therapy may help in many ways. For example, if it can be used to inhibit tumor growth, it will increase the likelihood of successful surgical removal of the tumor. Dr. Hickey also said that androgen therapy may be more helpful than some existing therapies-she believes that combining androgen therapy with other treatments may greatly improve the treatment effect of patients.

“We have provided convincing new experimental evidence that androgen receptor stimulating drugs can be more effective than existing standard treatments, and, for the latter, can be combined with other treatments to enhance growth inhibition.” Dr. Hickey explained.