Surgery, recurrence, chemotherapy, progress, life is coming to an end…

I was the first cancer patient to be treated with tumor infiltrating lymphocytes, and I have survived for ten years!
–Melinda Bachini

When Melinda Bachini walked into the office of the director of surgery at the National Cancer Institute, Dr. Steven Rosenberg, who has 40 years of clinical experience, knew that her survival period was only a few months.

Amazingly, she changed from a mother of 6 children to a grandmother. She became a ten-year survivor of advanced bile duct cancer!

All this benefited from her participation in the latest immunotherapy clinical trials developed by Dr. Steven Rosenberg’s team in the United States.

This team is one of the world’s top immunotherapy teams, using highly personalized solutions to attack and cure Melinda Bachini’s tumors.

This major breakthrough was reported in the journal Science, and her anti-cancer experience has also brought confidence to countless patients.

The destruction of life: No one can live two years of cancer…

Melinda Bachini, who lives in Billings, Montana, is the mother of six children.

In October 2009, she suddenly felt some physical abnormalities, nausea, heartburn, fatigue, and pain in her right shoulder. At first she thought it was just gallstones caused by frequent eating outside in recent months.

After going to the hospital for a checkup, she returned. Home is waiting for the result.

A few days later, the doctor called and told her that a grape-sized lesion had been found in her liver. A needle biopsy revealed cancer.

But it is impossible to determine what kind of cancer it is. At that time, her brain was blank, and she didn’t listen to what the doctor said. She immediately called her husband. Then they went to the hospital and had a lot of examinations, including mammography, abdominal CT, and MRI. . .

In the end, Melinda was diagnosed with cholangiocarcinoma, a rare type of cancer, with only about 8,000 Americans diagnosed each year.

Surgery, recurrence, chemotherapy, progress, life is coming to an end…

Melinda, who was only 41 years old at the time, didn’t believe that her life was over like this. She and her husband cried in a hug.

After calming down, she thought of her six children, the youngest being only 7 years old, and wanted to grow up with them. Her strong desire made her and her husband decide on active treatment.

They consulted the famous Mayo Clinic. For Melinda’s condition, surgery was the only option at the time.

In the third week after the diagnosis, Melinda had her first surgery, removing two-thirds of the liver containing the cancerous bile duct. 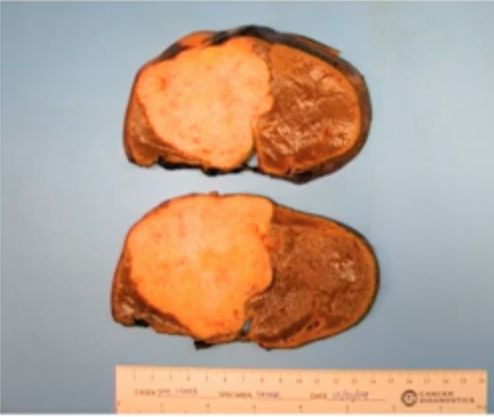 Unfortunately, the re-examination three months later brought even worse news. Her cancer had spread to both lungs, which meant that her cancer had reached a very advanced stage and could not be cured.

In June 2010, Melinda had no choice but to start chemotherapy with gemcitabine and cisplatin to try to prevent the progression of cancer, but the side effects made her feel painful. Her hair was almost lost, her hands and feet were severely damaged, and her ears were tingling.

It was the buzzing that hardly heard other sounds, and this kind of chemotherapy did not control for long. At the end of 2010, the liver tumor recurred again, and she began to receive docetaxel treatment, which caused her whole body pain and a severe rash. .

In January 2012, Melinda was fed up with the side effects of chemotherapy, which left her with no quality of life at all.

Does this kind of survival make sense? She made a choice between the length of life and the quality of life. She decided to terminate chemotherapy.

Even if she can’t imagine the children’s lives without their mothers, the premise is that they must live with quality.

Looking for new hope, she was reborn as the first person to receive personalized new immunotherapy!

She began to search for new therapies that she could try on the official website of clinical trials, and eventually she found and contacted the National Cancer Institute, a clinical trial of TIL for tumor treatment hosted by Professor Rosenberg.

In March 2012, when she walked into the Director of the Office of Surgery at the National Cancer Institute, Dr. Steven Rosenberg, based on more than 40 years of experience, immediately judged that Melinda might only have a few months to live.

At that time, Dr. Steven Rosenberg’s team was trying to use the most advanced genetic sequencing and tumor immunity to treat patients.

Two weeks after the infusion, the chronic cough that had plagued Melinda for a long time began to ease. Just one month after the treatment, she has gone skiing in the mountains with her family!

The effect is really amazing!

The tumors throughout her body began to shrink rapidly, and she recovered quickly.

The following comparison chart can clearly see that the lungs were full of tumors before the second treatment, including some very large ones.

After 20 months of the second TIL treatment, these tumors have shrunk significantly. Experts I think this is probably a scar. 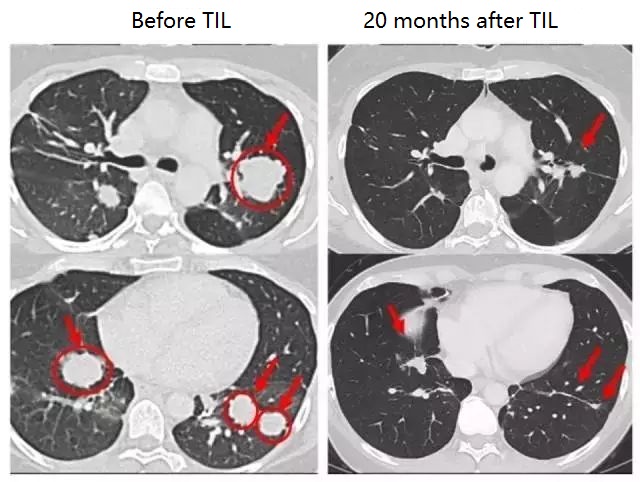 The story does not end. Now, as a 10-year survivor of cholangiocarcinoma, Melinda has not only enjoyed the happiness brought by her growing family, she has also been appointed as the NCI Hepatobiliary Special Patient Advocate. Melinda has participated in NCCS. , CPAT seminar, NCCN policy summit, and participated in the White House as the American Cancer Moonshot Moonshot Program, telling her personal story and telling her experience of being reborn from excellent cancer care and innovation in the US Capitol.

What is the immunotherapy that made Melinda a super survivor?

From only a few months of survival to becoming a super survivor, I believe everyone would like to know what exactly Melinda received immunotherapy?

Is this therapy effective only for Melinda’s cholangiocarcinoma or can it subdue all cancers?

Speaking of immunotherapy, many people may already know PD-1 and CAR-T, but this is just the tip of the iceberg.

In the early stages of cancer, the immune system tries to attack tumors by mobilizing special immune cells from lymphocytes.

Lymphocytes have the ability to recognize and attack tumor flow and penetrate deep into the tumor. These cells are called tumor infiltrating lymphocytes (TIL), and they were discovered by Rosenberg and his team, a leader in the immune world.

Dr. Rosenberg believes that they are the most powerful immune cells that penetrate into the enemy’s army, but due to some reasons (such as tumor microenvironment and PD-1), their functions are inhibited and cannot effectively kill tumors in tumor tissues. cell.

However, scientists use some in vitro culture methods to enrich certain types of lymphocytes in these tumor tissues, and then return them to patients, which can play an anti-tumor effect, and the combined PD-1 effect will be better.

Secondly, this new type of therapy is not simply amplifying and reinfusing, but to determine the specific mutations in the patient’s case, then use the mutation information to find the T cells that can most effectively target these mutations, and finally extract the cell mutations in the specific patient’s tumor T cells, these cells have the ability to accurately identify cancer cells.

After these immune cells are cultured in vitro, they are reinjected into the patient’s body.

At the same time, the research team used the immune-enhancing drug interleukin 2 and another “star anticancer drug” PD-1 inhibitor Keytruda. Keytruda is another immunotherapy immune checkpoint blockade, which is used in some cancers. Has a significant effect.

Based on the above procedures, the new therapy is considered “tailor-made” for patients.

The treatment process of TILs therapy 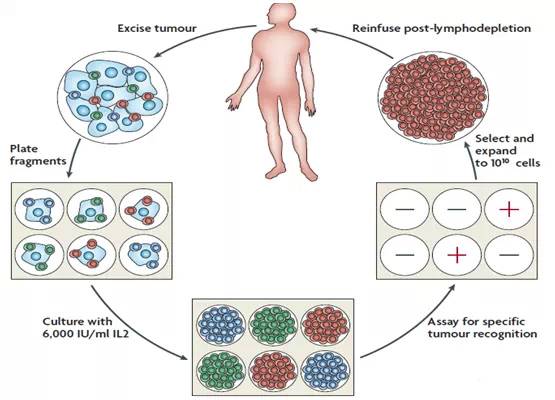 How to receive TILs cellular immunotherapy?

At present, this new type of immunotherapy is not yet on the market, but a number of clinical trials for various solid tumors (non-small cell lung cancer, colorectal cancer, ovarian cancer, melanoma…) have been carried out worldwide. Participating patients can contact e-medicine safety. 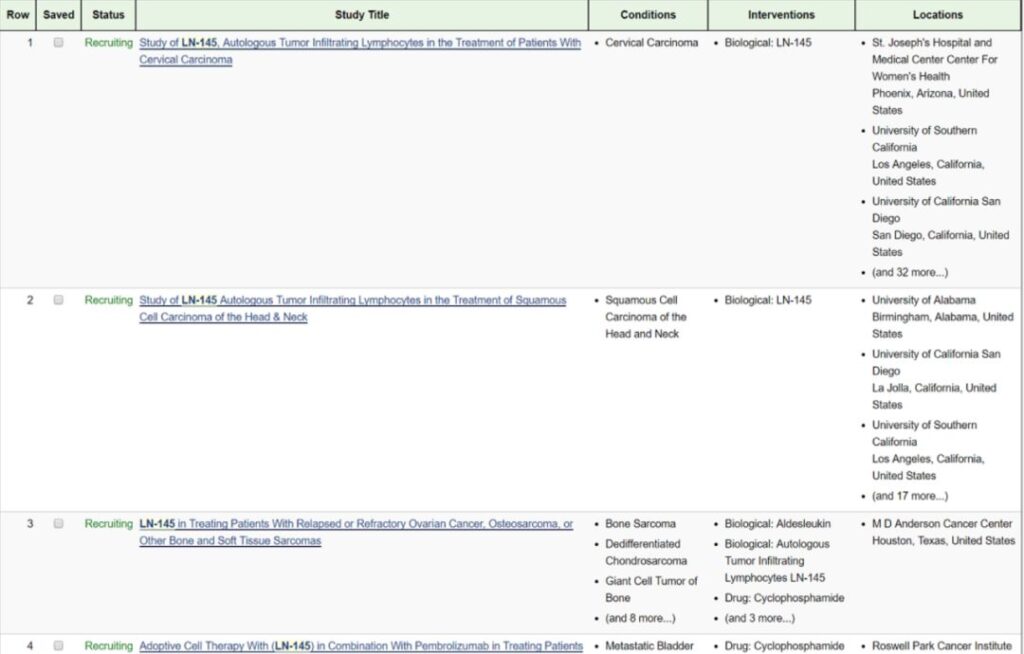 Finally, the good news to tell everyone is that the FDA has granted the tumor infiltrating lymphocyte (TIL) treatment method LN-145 as a breakthrough treatment designation.

This is the first time that cellular immunotherapy for solid tumors has won this award. It is only a matter of time.

Once approved by the FDA, this will be the first cellular immunotherapy for solid tumors and will bring huge survival benefits to cancer patients. Let us wait and see.