There is no doubt that India became the first country to achieve herd immunity! But does this mean that India is safe in the face of the epidemic? The experience of Manaus, Brazil should be an answer. According to a report from “India Today”, the fifth round of serum antibody testing against the COVID-19 virus was carried out in the Indian capital New Delhi in January. The survey was conducted from January 10 to 23. Investigators collected a total of 280 areas in the capital. 28,000 samples were taken. Preliminary results show that 60% of the tested population is positive for serum antibodies.

This means that 60% of the local people have been infected with the new coronavirus.

Earlier, the Indian media “The Print” news network also published an article that quoted the remarks of the founder of a private virus testing agency in India, saying that the epidemic had “quietly immunized 70% of Indians.” “Because nearly 1 billion Indians have been infected with COVID-19, but most of them have recovered and have long-lasting immunity.

Is it really? Let’s look at the data first.

From the statistics chart of newly added cases in India, we can see a large peak with perfect peak shape. At its peak, nearly 100,000 people were added every day. Now it has dropped to about 10,000, which is nearly 90% less than the peak. 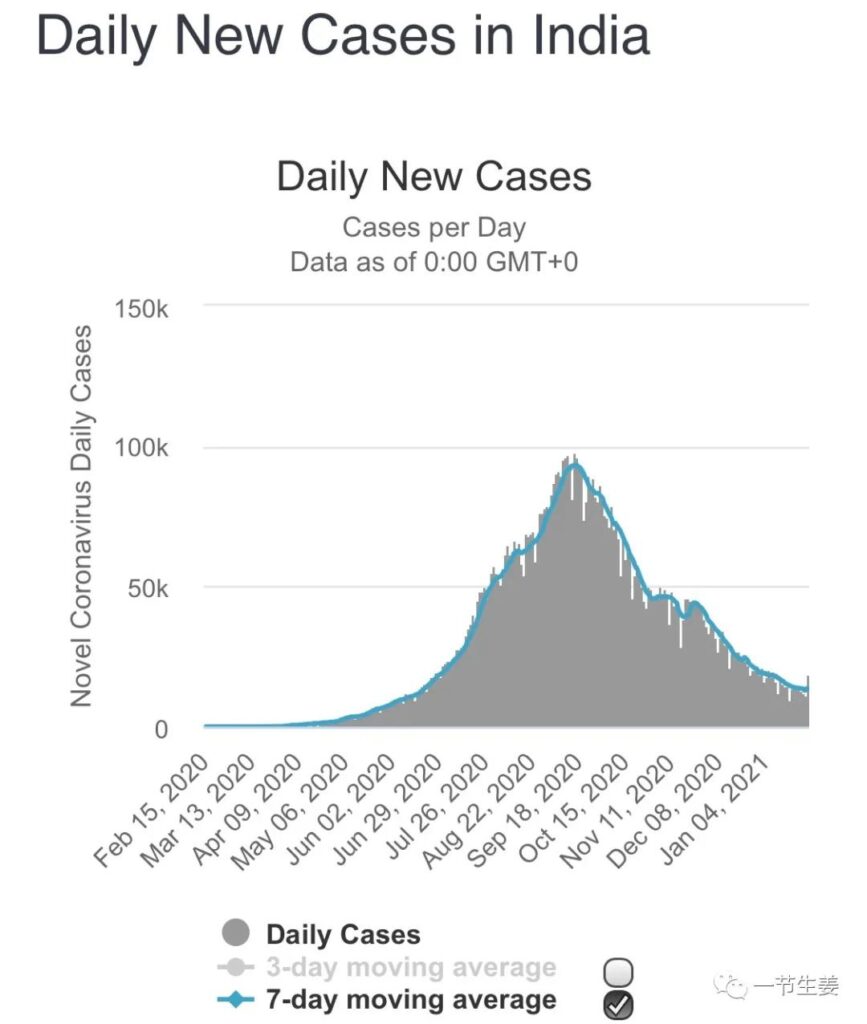 Picture: New coronavirus cases in India every day (data and pictures from worldometers.info)

Not only that, the current number of cases in India has also shown a good peak shape, from the highest of 1 million people to less than 200,000 people. 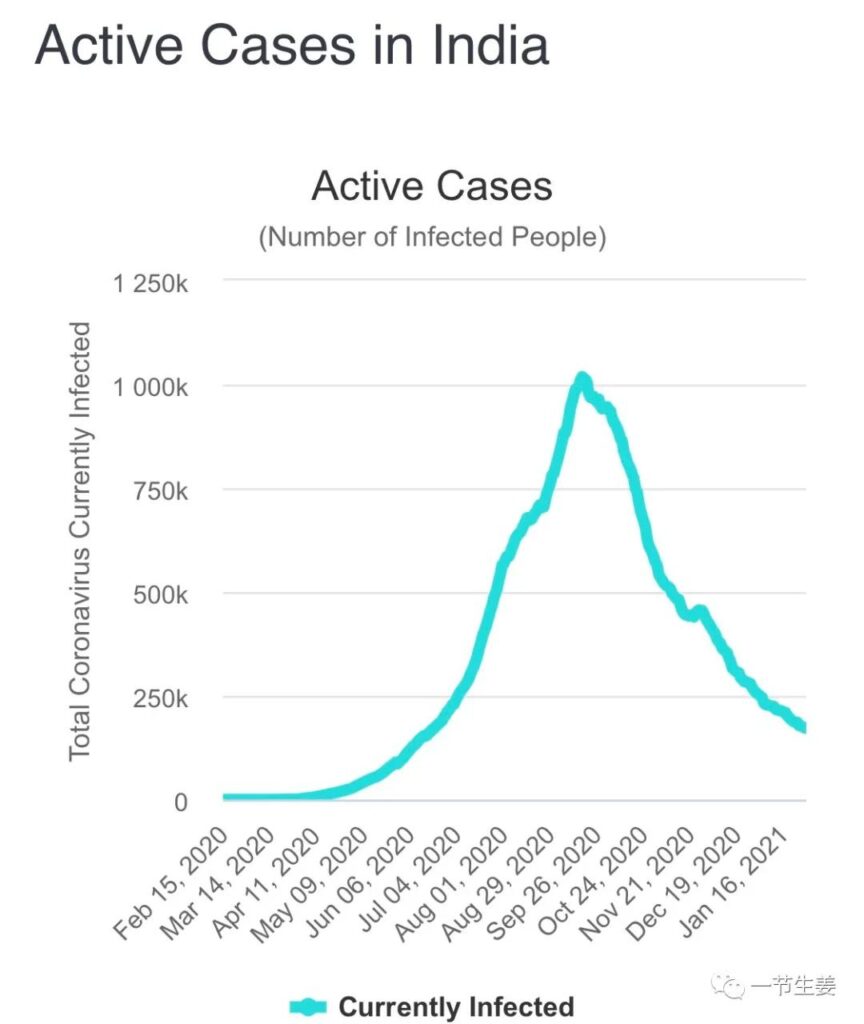 Picture: India has new cases of COVID-19(data and pictures from worldometers.info)

India has not carried out large-scale vaccination of the COVID-19 vaccine. From the peak of the epidemic, it is indeed very likely that it has been close to herd immunity.

Although the current number of confirmed diagnoses in India is only about 10 million, the actual number of infections in many countries should be 5 to 10 times or even higher than the number of confirmed cases due to inadequate COVID-19 testing. Therefore, it is reasonable to speculate that 50% to 60% of India has been infected with the virus.

Is the epidemic in India really going to pass soon, is victory in sight?

Before answering this question, we need to look at the example of Brazil.

India is currently the country with the second most confirmed cases of COVID-19, followed by Brazil.

In the Amazon rain forest of Brazil, there is a city called Manaus (also translated as Manaus), the capital of the Amazon state, with a population of more than 2 million.

However, just as the whole city entered the darkest moment, when everyone felt that Manaus would be destroyed by COVID-19, the number of local cases suddenly decreased from May. By August, the daily number of COVID-19 deaths was close to zero. 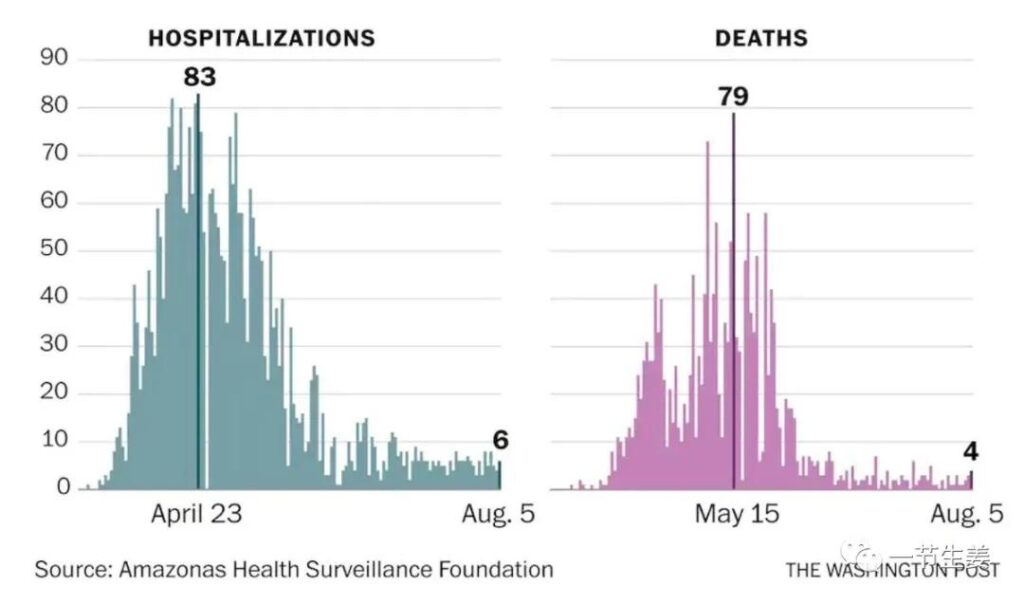 The Manaus epidemic also has a perfect peak shape. Judging from the peak shape, India today is very much like Manaus in June last year.

Not only is the peak shape similar, a study conducted by the University of Sao Paulo in Brazil last year investigated the positive rate of new coronavirus antibodies among local blood donors in Manaus and found that in June, the positive rate reached 52.5%.

This means that half of the people in Manaus have been infected!

This ratio is also very similar to India.

By July, the cumulative infection rate in Manaus reached 66%.

By October, the cumulative infection rate in Manaus had reached 76% (1).

However, the good times will not last long.

After entering December, although it is summer in Manaus in the southern hemisphere, the epidemic has revived.

It’s not just a resurgence, this second wave of epidemic is simply the first wave and it’s powerful!

Not only that, since January this year, the epidemic in Manaus has deteriorated rapidly, with a sharp increase in confirmed cases and deaths, causing the medical system to collapse again, and even the oxygen cylinders for oxygenating patients are not enough. From the perspective of clinical manifestations, the mutant virus is more contagious, the condition of the infected person is also more serious, and the death of the patient also shows a younger trend.

3. What happened in Manaus?

In response to the second wave of epidemics after the “herd immunity” of Manaus was achieved, on January 27, the “Lancet” magazine published an article that explored possible causes (3).

The third reason is the emergence of a new mutated virus strain, and the previously produced immune protection has no effect on this new virus strain! Analysis of virus genes confirmed this possibility. The currently circulating strain in Brazil is the P.1 strain. Two mutations appearing on this strain can reduce the efficiency of neutralizing antibodies.

Taken together, it should be the common effect of the second and third reasons above. The immune protection that originally relied on antibodies has been reduced, and a more rogue virus strain comes, and a major epidemic begins again.

Studies have found that among the COVID-19 infections in Manaus in December, the proportion of people infected with the P1 strain has reached 44% (3). By January, this ratio had reached 85.4%!

According to Brazilian media reports, there have been patients who have been infected with the P1 strain twice.

4. Will India repeat the mistakes of Manaus? What about the world?

On January 28, Indian Minister of Health Vardan stated that “it has successfully flattened the growth curve of the COVID-19 infection rate. 146 of the 718 regions in India have no new cases in the past week, and 18 regions have zero growth for two consecutive weeks.”

In the aforementioned Indian news, not only did some people think that India has reached herd immunity, but also that India does not need mass vaccination, and they feel that vaccination will bring more unnecessary harm.

If you fully understand the Manaus epidemic, will India still confidently believe that “herd immunity has been reached”?

It only takes a mutant strain to spread, and the whole society will fall into chaos like Manaus.

As long as the epidemic is still circulating in one area of ​​the world, the virus will continue to produce new strains. It is now known that the protection rate of the vaccine has been discounted for the mutant strains emerging in South Africa.

It can be expected that if the epidemic cannot be controlled as soon as possible, the COVID-19 will be like the flu, tossing once or even twice a year.

There are two ways to control the epidemic. One is to take “strict prevention” measures like China, and the other is to vaccinate on a large scale as soon as possible, hoping that the vaccine will give humans a stronger herd immunity than the virus.

Few countries can carry out this kind of “strict prevention” measures. If the global epidemic cannot be controlled by vaccines, then the country that can “strict prevention” can only build the Great Wall by sea, land and air. Isolated from the world! Otherwise, you have to “Chinese New Year on the spot” every year,

Vaccines are not only the only hope for the world to get out of the shadow of the epidemic, but they must also be used globally and quickly! The current competition is actually a race between vaccines and viruses. If the vaccine runs before the virus mutates and stops the epidemic, then humans will be safe; and if the virus can transform a strain that makes the vaccine completely ineffective, then humans It will only fall into the single cycle of the COVID-19 epidemic.

Humans are not only facing virus mutations, but also the problem of insufficient vaccine production capacity. Obviously, for human safety, it should be hoped that all vaccines that have completed Phase 3 clinical trials will be effective in practical applications, not that a certain vaccine encounters Waterloo.

To take precautions, in order to avoid the occurrence of complete failure of the vaccine against the mutant virus, it is time to consider upgrading the vaccine version.