On June 16, local researchers in India uploaded a preprint of the latest new coronavirus antibody positive sample. The samples taken in this preprint were from the tsunami period in India this year: March 15-June 10. By comparing last year’s data from the same sampling area, this preprint suggests that India may once again complete the “herd immunity” achieved through natural infection.

The positive rate of antibodies in Delhi is 74%

A total of 4509 people were sampled in this study, including minors over 2 years old. The sampling sites are widely distributed, including Delhi and surrounding areas, Bhubaneswar rural areas, Gorakhpur rural areas and Agartala rural areas.

In this study, the sampling of Delhi and surrounding areas was mainly concentrated in the areas where low-income residents live in southern Delhi. In the past, the Delhi government has also made statistics on the positive status of antibodies in the same area due to last year’s COVID-19 infection.

Let’s first look at the peak of this year’s epidemic, the situation of positive antibody samples in southern Delhi—— 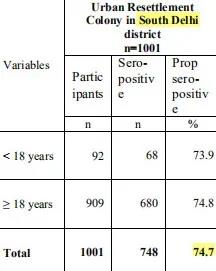 Research data shows that among low-income people in southern Delhi, 74.7% are antibody-positive, and there is almost no difference between people aged 2-18 and adults, but in the sampled rural areas, the antibody positive rate is different.

The Gorakhpur rural area, where the positive rate is relatively high, reached 87.9%, while the other three regions (including the rural areas around Delhi) have an antibody positive rate ranging from 51.9% to 59.3%.

The Delhi government previously conducted several antibody level surveys in various areas of Delhi. In a local news report on February 2 this year, relevant Indian authorities announced data on the sero-positive level of COVID-19 infections in Delhi at that time.

At that time, the tsunami in India this year hadn’t started to detonate at all. Therefore, the health official named Satyendar Jain was very satisfied with the data that the Delhi area had obtained 56.13% of the total antibody through natural infection at that time. He even said: “Delhi A big win against COVID-19. (Delhi has largely won over Covid-19)”

At this time, among the low-income people in southern India, the antibody-positive rate reached 62.18%.

After March, Delhi did not avoid the outbreak of the epidemic tsunami because of its 56.13% antibodies.

According to the monitoring data of Johns Hopkins University (JHU) in the United States, in the new wave of epidemic this year, not only was the number of new cases in Delhi three times the peak last year, but the number of deaths was also 3 times that of last year. In other words, the 56.13% antibody positive level announced in early February did not give Delhi any advantage in the face of the new wave of epidemics. Instead, there was a death climax that was more than three times higher than last year and lasted longer. .

The poor in southern Delhi reached 62.18% antibody positive in the epidemic before February, and were again “immunized” to 74.7% by the epidemic that began in March…

What is more worthy of consideration is that in the past, when the second wave of more fierce outbreaks in Manaus, Brazil appeared, some researchers speculated that it was because the antibody level of the previous wave of infection subsided after nearly 6 months, so the antibody did not rise. As a result, Manaus was unable to fight back during the second wave of infection.

However, in early February this year, Delhi announced the results of the fifth antibody survey after the epidemic at the end of last year. From the timeline released by JHU, we can see that there is no six-month gap between the peak of the epidemic this year and last year. So, what role did the 56.13% antibody positive rate play in this year’s epidemic tsunami?

In the face of such epidemic tsunami and death data, who is the one who has won the victory? We dare not say, we dare not ask.

India predicts that the third wave of the epidemic will strike, will it still have a complete victory?

Mumbai has a similar experience with Delhi. Last year, a local researcher published an article on The Lancet Global Health saying that Mumbai slums had achieved a 54.1% antibody positive rate.

Like Delhi, Mumbai has not escaped from the tsunami this year. Maharashtra, where Mumbai is located, has not even brought down the death wave…

As a result, after April this year, some scholars suspected that Mumbai’s positive antibody data released by The Lancet Global Health last year was flooded because they could not explain the high number of new infections and deaths in Mumbai.

Regardless of whether water was injected last year or not, according to the infection situation this year, Mumbai’s current antibody-positive level will not be much worse than Delhi. In rural India, where the infection rate was considered low last year, a sample survey of preprints showed that at least an antibody-positive rate of more than 50% was achieved. In the whole population, there is no significant difference in the level of antibody positive for minors over two years old and adults.

Judging from the preprint data, India, or at least Delhi, once again completed the “herd immunity” obtained through natural infection.

At present, many places in India predict that the third wave of the epidemic is coming. I don’t know whether such a high antibody positive rate, especially in the big city of Delhi, which has a positive rate of more than 70%, will make health officials more confident and capable than in February. How about a complete victory?