All living things face the pressure of natural selection, and evolution is the way living things deal with selection pressure. The so-called “going against the current, do not advance or retreat”, if a species lacks evolution or the rate of evolution is too slow, then it may eventually be eliminated and extinct.

It is worth noting that for most biological evolution, the time span is extremely long. For example, some countries’s national treasure giant panda originated in the Late Miocene 8 million years ago. It took millions of years to evolve. Become a “cute treasure” with dark circles. Giant panda is called the living fossil of the animal kingdom

In contrast, humans have evolved more rapidly. Starting from Australopithecus, in just over three million years, human beings have moved from arboreal to terrestrial, from Africa to the world, from the bottom of the food chain to the dominance of the earth, and human civilization is expanding exponentially.

However, from the outside, modern humans seem to be no different from Homo sapiens who just left Africa tens of thousands of years ago. Therefore, many people can’t help but have this doubt-has humans stopped evolving?

This research shows that human evolution has never stopped, and humans are still facing natural selection! Researchers found that residents on a small island in the African island country of Cape Verde have adapted to malaria. A genetic mutation from African ancestors is retained, while the frequency of the corresponding alleles from European ancestors is declining.

Other examples of human genetic adaptation are thought to unfold in a time span of tens of thousands to hundreds of thousands of years, but it took only 500 years for the development of the anti-malaria capabilities of the residents of Cape Verde!

This is one of the fastest and most dramatic evolutions found in the human genome to date.

In the long history of mankind, the shadow of infectious diseases has always loomed over mankind. It is no exaggeration to say that disease is one of the basic parameters and determinants of human history. In his book “The Plague and Man”, the famous American historian William McNeill cited numerous examples of plagues that have changed human history.

Nowadays, when discussing the Peloponnesian War in 430 BC, we often attribute the failure of Athens to the Spartan war to a different political system. But in fact, at the fiercest moment of this war, the city of Athens had lost a quarter of its troops due to a plague that came and went without a trace. Without this plague, the course of the war might be rewritten.

Similarly, in the Franco-Prussian War that broke out in 1870, the plague also at least partially determined the outcome of the war. At that time, smallpox made some French soldiers lose their combat capabilities, while Prussian soldiers were unaffected by smallpox vaccination. In the long history of mankind, smallpox virus is one of the most terrible viruses

Not only that, infectious diseases can also pose a huge threat to human life and safety-smallpox, which has almost run through the entire history of human civilization, the Black Death that raged in medieval Europe, the incurable AIDS, and the recent outbreak of the COVID-19 pneumonia pandemic. These terrible infectious diseases have caused a large number of casualties.

From this point of view, infectious diseases are one of the greatest natural selection pressures that humans face after reaching the top of the food chain. Infectious diseases have promoted human evolution to some extent!

Malaria has accelerated the evolution of these islanders

In this study led by Dr. Iman Hamid of Duke University, researchers found traces of malaria adaptation in the DNA of residents of Cabo Verde off the coast of Africa-Duffy antigen chemokine receptor ( DARC) gene frequency is increasing rapidly.

Cape Verde is an archipelago in the Atlantic Ocean. It consists of ten islands. It is about 385 miles from Senegal. It was uninhabited until the middle of the 15th century. At that time, the Portuguese brought some African slaves here and forced them to live on this land. After working hard, only people settled on the island of Cape Verde.

It is worth noting that these African slaves who were forcibly brought to Cape Verde carried a genetic mutation that European colonists lacked, namely DARC, which prevented Plasmodium vivax from invading red blood cells. This means that people with this allele are less likely to get malaria.

The research team analyzed the DNA of 563 islanders. The research report shows that when Africans and Europeans live in a mixed environment, people who inherit this protective mutation have a huge survival advantage due to the rampant malaria on the island. As for only 20 generations, the proportion of islanders carrying this mutation has skyrocketed.

This is a very alarming rate of evolution. In contrast, other examples of human genetic adaptation are thought to be developed in a time span of tens of thousands to hundreds of thousands of years, but the development of the anti-malaria ability of the residents of Cape Verde only took 500 years! 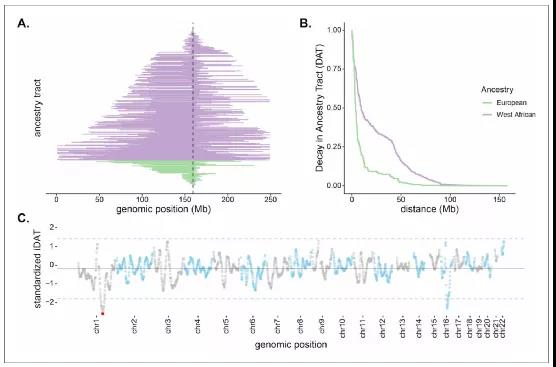 Dr. Iman Hamid said that 500 years, this is just a blink of an eye on the evolutionary time scale. Large-scale immigration means facing different diseases and environments from before, and this study clearly shows that humans are still evolving!

Co-evolution of the new coronavirus and humans Of course, this is a fairly simple example. In contrast, the co-evolution of viruses and animals appears quieter. Studies have shown that early mammalian ancestors evolved the placenta with the help of symbiotic retroviruses. In addition, big data analysis found that since humans and chimpanzees broke up, nearly one-third of the evolution of protein adaptation is driven by viruses, and the real driving force behind it is natural selection.

At present, the COVID-19 virus (SARS-CoV-2) is raging in many countries and regions around the world. So far, the cumulative number of confirmed cases worldwide has exceeded 100 million, and the death toll has exceeded 2.23 million. In this regard, many domestic and foreign scholars speculate that the new coronavirus may be similar to the flu virus and coexist with humans for a long time.

On January 18, 2021, the top international academic journal Nature published online in the form of an “accelerated review article” titled: Evolution of antibody immunity to SARS-CoV- led by the Rockefeller University and Icahn School of Medicine at Sinai. 2 research papers [2].

This study shows that patients recovered from the COVID-19 can resist infection with the COVID-19 virus for 6 months or more. It is worth noting that the human body is also constantly optimizing the antibody immune response to the virus, and the antibodies produced a few months after infection have enhanced the ability to block SARS-CoV-2 and its mutant strains found in South Africa, Brazil and other places. 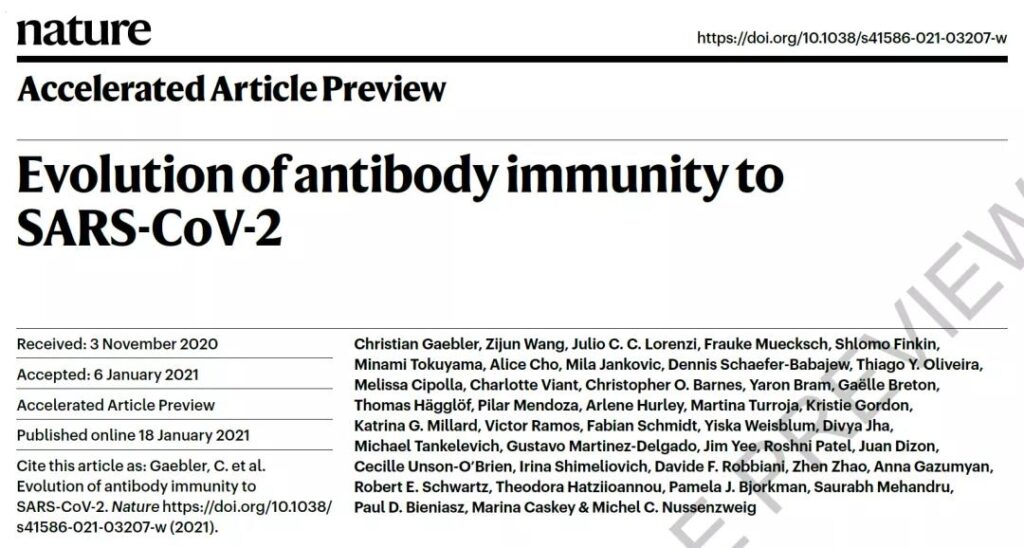 After a human is infected with a virus, the immune system recognizes the antigen and presents it to B cells, which proliferate and differentiate into corresponding plasma cells, and then produce antibodies that can bind to the antigen, thereby resisting further invasion and infection by the virus.

Under normal circumstances, the antibodies produced by the body in response to infections stay in the plasma for several weeks or months, but their levels will decrease significantly over time. However, memory B cells are left in the body, and these cells will quickly recognize the pathogens that invade the second time, so as to rapidly proliferate and release the corresponding antibodies.

In this study, the research team led by Professor Michel C. Nussenzweig analyzed the humoral immune response of 87 patients with new coronavirus disease. Researchers tested the level of neutralizing antibodies in the patient’s plasma 1.3 months and 6.2 months after the patient was infected with the new coronavirus, and analyzed the characteristics of memory B cells. 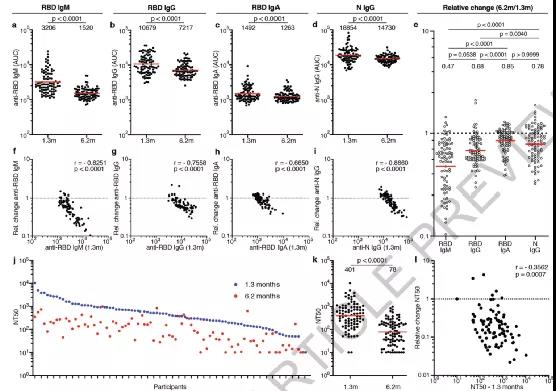 The researchers found that the titers of IgM and IgG antibodies against the RBD domain of the SARS-CoV-2 S protein decreased significantly, while IgA was less affected. At the same time, the plasma neutralizing activity of the antibody was reduced by 5 times in the pseudotype virus detection, but the number of RBD-specific memory B cells did not change. 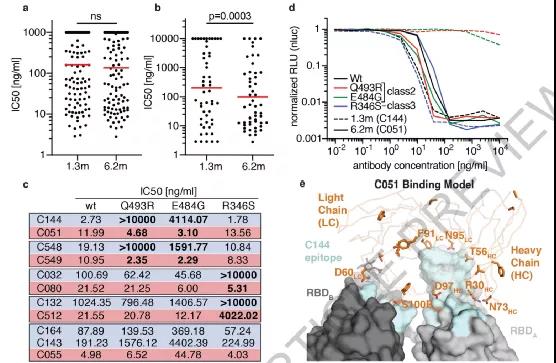 More importantly, memory B cells showed clonal replacement after 6.2 months, and the antibodies expressed by them had larger somatic hypermutation, and the antibody efficacy and resistance to RBD mutations were enhanced. These signs indicate that, affected by the COVID-19 pandemic, the human humoral immune response is continuing to evolve!

All in all, infectious diseases are closely related to human evolution. While causing huge casualties, they also screen the crowd-the fittest will survive and the weak will be eliminated. The corresponding allele frequency in the human population will also change, and the change of gene frequency is a manifestation of species evolution.

Therefore, whether it is the extinct variola virus, the plague and malaria that are still circulating in the region, or the recent outbreak of the COVID-19 pneumonia pandemic, the struggle between microorganisms and humans is a cruel and smoke-free war. The development of modern medicine This war has not been completely ended, mankind is still faced with natural choices-mankind still needs to evolve!