Lancet: Natural infection immunity may not replace vaccines on COVID-19

On  March 19, the “Lancet” magazine published an online epidemiological survey of the first long-term seropositive rate of Wuhan residents. The paper was led by academician Wang Chen of the Chinese Academy of Medical Sciences and Peking Union Medical College.

The research results of the paper show that as of April 2020, the positive rate of COVID-19 antibody among Wuhan residents was 6.9%, of which 82% were asymptomatic infections. Among the antibody-positive people, only 40% have produced neutralizing antibodies, and the titers of neutralizing antibodies remain stable for at least 9 months.

Research suggests that the Wuhan population still generally lacks immunity to the new coronavirus and must be vaccinated on a large scale to form herd immunity to prevent the pandemic from happening again.

Academician Wang Chen, the lead author of the paper, said: “Assessing the proportion of the population infected with the new coronavirus and immune is essential for the implementation of effective prevention and control strategies to reduce the possibility of future pandemics.” 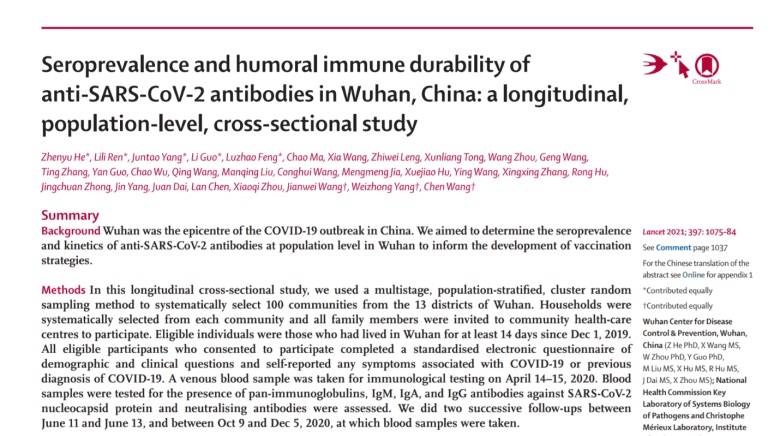 Professor Jiang Qingwu from the School of Public Health of Fudan University told the “medical community” that this paper is very important. It proves the existence of the natural immune phenomenon of the new coronavirus from an empirical scientific point of view, and the immunity can be maintained for a certain period of time, which gives us control through vaccines. Illness provides confidence.

Jin Dongyan, a well-known virology expert and professor of the Department of Biochemistry at the University of Hong Kong School of Medicine, believes that the results of the paper do not exceed the scope of the academic circle.

After Wuhan was unblocked in April 2020, the researchers selected 13 administrative regions for systematic random sampling, and conducted on-site questionnaires, throat swab nucleic acid and serum new coronavirus antibody tests on 9,542 residents in 3,556 households, and in 2020 Three follow-up visits were conducted in June, October and December.

The study covered all age groups, but excluded people with serious illnesses (such as advanced cancer or severe mental illness).

The results of the study showed that a total of 532 (5.6%) of the interviewees were positive for COVID-19 seroantibodies. After correction, the population’s antibody positive rate was 6.92%, of which 437 (82%) were asymptomatic infections.

From the above data, we can infer that as of April 2020, more than 1.3 million of the 19 million people in Wuhan have been infected with the COVID-19 virus, which exceeds the number of 50,000 confirmed cases reported in Wuhan.

“The Lancet” magazine commented that the paper supplemented the results of global related research. Studies in Switzerland, Spain, the United States, Iceland and other countries have all tried to clarify the true infection rate of the population. Since the proportion of asymptomatic infections is still unclear (the global estimate is between 6% and 96%), this type of research is of great significance.

Academician Wang Chen said: “Since people with mild infections may not seek medical attention, and asymptomatic patients are usually not tested, the number of confirmed cases of new coronavirus disease and the actual number of infections will be very different-the experience and data of various countries are similar.”

In addition, the paper also pointed out that differences in the psychology and behavior of infected patients, local virus nucleic acid detection capabilities at the time of the epidemic, nucleic acid screening strategies, nucleic acid sampling methods, laboratory testing methods, etc., will also cause the positive rate of antibodies to be much higher than local reports. The incidence rate.

The paper also counts the positive rate of COVID-19 seroantibodies in terms of geography and population.

In terms of geographic area, among the 13 administrative regions of Wuhan, the areas with the highest COVID-19 positive rate are Jiang’an District and Qiaokou District, both exceeding 10%.

The researchers also mentioned that 82% of the antibody-positive people in this study were asymptomatic, which is much higher than the estimated value of 40%-45% reported globally.

The reason is that the subjects may have recall bias when reporting whether they have had symptoms in the past 5 months, but the study will not obviously misjudge whether there are symptoms or not, because Wuhan adopted very strict measures at the time. To identify each case, the citizens of Wuhan paid great attention to recording their symptoms during the outbreak.

Neutralizing antibodies can be maintained for at least 9 months

Researchers found that in April 2020, about 40% (212/532 people) of antibody-positive people developed neutralizing antibodies. In addition, for the 335 participants who participated in all three follow-ups, their neutralizing antibody levels did not significantly decrease within 9 months.

It is also necessary to comprehensively judge the effect of cellular immunity on the virus. However, cellular immunity cannot be detected at the human level, and the accuracy of neutralizing antibodies will also be affected by detection technologies and methods.

Professor Richard Strugnell and Dr. Nancy Wang (not involved in the study) of the Doherty Institute, Australia wrote a review of the study:

“The success or failure of global COVID-19 epidemic prevention and control depends on the natural infection of the virus, especially the immunity induced after vaccination.

Given that the neutralizing antibodies produced by natural infection are relatively small, the study once again emphasizes the adoption of the virus at the population level. The importance of an effective COVID-19 vaccine to control the disease.

The extraordinary, rapid and effective control measures implemented in Wuhan may curb the spread of the virus, but also hinder the production of continuous neutralizing antibodies, thereby reducing the proportion of naturally acquired herd immunity .”

The author also pointed out some limitations of his study. Since most cases are asymptomatic, nucleic acid testing cannot be performed at the beginning of the infection, and it is impossible to confirm the exact time when the research subjects were infected and produced antibodies.

The author pointed out that between mid-March to April 2020, Wuhan reported few cases of COVID-19, so it can be speculated that the infection occurred at least 4 weeks before the blood collection.

Lancet: Natural infection immunity may not replace vaccines on COVID-19