Women may have more “natural immunity” against COVID-19

Women may have more “natural immunity” against COVID-19.

The husband is infected with COVID-19 and is admitted to the ICU, but the wife is okay. Someone is born immune to COVID-19?  In the face of the COVID-19 virus, “everyone is not equal”

Let’s listen a story in Brazil: Tess Andrade may be one of the few people in the world who will not be infected by the new coronavirus.

Her husband was admitted to the ICU for being infected with COVID-19. She and her husband never wear masks when they are at home. She has also had close contact with multiple confirmed cases of COVID-19, but she has not yet been infected.

“Tess’s two experiences show that some people may carry special genes and can avoid infection. So, does finding these genes mean finding a way to defeat the new coronavirus?” US health news website STAT reported.

Husband was diagnosed with COVID-19

“That day, my husband and I went upstairs together. When we stepped onto the last step, he suddenly collapsed to the ground.” Tess Andrade recalled that it was a day in June 2020.

She quickly turned out the portable pulse oximeter and put it on her husband’s fingertips. “He has a fever.

The device indicated that his blood oxygen level dropped by 8 points compared to when he woke up in the morning.”

Tess has seen some studies and knows that hypoxemia or the main symptoms of the new coronavirus infection and the development of severe illness.

The purchase of an oximeter is for “precaution”, self-monitoring at home and early detection.

CT after admission showed that Eric had multiple small patchy shadows and focal ground glass shadows in his lungs. This means that there is a serious infection in the lungs.

A later contact history investigation showed that Eric had visited a friend’s house 7 days before the onset of symptoms. And his friend had already been diagnosed with COVID-19 before him.

Eric was quickly transferred to the intensive care unit and received mechanical ventilation. After his condition stabilized, he suffered a thrombosis, and his discharge time was repeatedly delayed.

“It is worth noting that Tess. She and her husband are very affectionate. At home, the two never wear masks, sleep in the same bed, and have a lot of intimate actions. But Tess’s two COVID-19 nucleic acid results were negative.” STAT reported. .

This is not the only time Tess has been exposed to the threat of the new coronavirus. She was invited to participate in the conference at the University of Sao Paulo in Brazil. After the meeting, many people were diagnosed with infection, and several people were in close contact with Tess. But Tess’s nucleic acid result is always negative.

“This is not just a matter of luck.” Helen Su, an immunologist at the National Institute of Allergy and Infectious Diseases in the United States, believes that the most terrifying aspect of the COVID-19 pandemic is that it is difficult to perfectly predict who will be infected under the same conditions and who Will develop into severe illness. 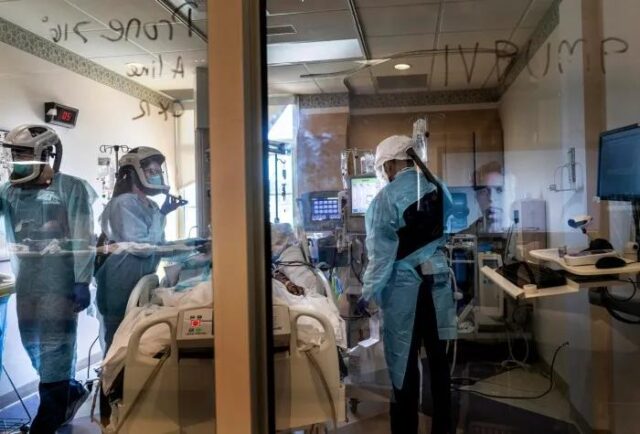 Photo caption: In an intensive care unit in California, USA, doctors are treating patients with COVID-19 pneumonia. /The Washington Post

Is there really a “natural immunity” against COVID-19?

It infected approximately 1 billion people worldwide in 1918-1919. The mortality rate is estimated at 2.5%-5%, and most people can still heal after being infected.

“Infectious diseases may be caused by special genetic loopholes, which make people more susceptible to certain pathogens. But only after the pathogen “takes a loop” into the human body, these deadly genetic features will be noticed.” Rockefeller University in New York and Paris, France Jean Laurent Casanova from the Naik Children’s Hospital told STAT.

In 1952, an 8-year-old boy was admitted to the Walter Reed Army Hospital in Washington, USA. The little boy had repeated infections, and antibiotic treatment was not effective.

Through protein electrophoresis technology, the attending doctor found that he was born with a lack of serum globulin.

After a monthly injection of serum globulin, the boy’s health status improved significantly and he lived to adulthood. Since then, this primary immunodeficiency has been called X-linked agammaglobulinemia (XLA).

So far, more than 400 “inborn errors of immunity” have been recorded. For the past 25 years, Casanova has continued to collect and analyze the genomes of children, adolescents and young people.

He found that some young people had worse symptoms and longer recovery time after being infected with herpes simplex virus and varicella-zoster virus.

There are also children who have never shown a weakened immune system, but are repeatedly infected with a single pathogen.

At the same time, the medical and scientific circles are constantly discovering some inherent “traits” that can “immunize” certain diseases.

Among them, the most famous is Stephen Crohn, who “will never suffer from AIDS”. In 1978, Crohn’s partner and gymnast Jerry Green was diagnosed with AIDS.

More than 70 of Crohn’s friends also died of AIDS within 10 years after Green’s death. Only Crohn is always healthy. He kept telling family members: “We must have some kind of natural antibody.”

In the mid-1990s, this speculation was confirmed: Crohn carried a mutation in the CCR5-Delta32 gene. CCR5 is a protein on the surface of human immune cells.

HIV must be combined with CCR5 to successfully enter human cells and cause infection. The CCR5 mutation is equivalent to closing the passage of HIV into the human body.

Studies have shown that people worldwide who carry this mutant gene account for less than 1% of the total population.

The genomes of more than 100,000 COVID-19 patients have been analyzed

Another person who has been studying “genetic resistance to viral infections” is Mayana Zaz, director of the Human Genome Research Center at the University of São Paulo in Brazil.

In 2018, she published a study involving nine pairs of twins. Seven of the pairs are fraternal and two of them are identical. The mothers of the children were infected with Zika virus during pregnancy. However, it was clearly raised in a mother’s womb. One child was diagnosed with congenital Zika syndrome such as microcephaly at birth, while the other was very healthy.

Further analysis revealed that human susceptibility to Zika virus is related to its genetic background, and the key lies in whether neural progenitor cells will be infected. Some cells are difficult to be infected due to the lack of cell surface glycoprotein CD24.

In February 2020, Zaz passed by the residence of a middle-aged couple while walking. She realized that she hadn’t seen the male host for several days. Upon asking, I found out that the male owner was infected with the COVID-19 and was admitted to the hospital for treatment, but his wife was fine.

“The COVID-19 virus may also have natural immunity. We can apply the idea of ​​twin research to intimate partners to isolate and confirm the genes that resist the COVID-19 virus.” With this idea, Zaz accepted an interview with Brazilian TV a few days later.

Couples are invited to sign up for relevant research. She and the research team received 3,000 emails, and eventually 100 couples were selected and subjected to genetic sequencing. These couples are all infected and symptomatic on one side, but the COVID-19 result of the other side is negative.

Research teams around the world have analyzed and interpreted more than 100,000 COVID-19 patients.

In the genome, it was found that more than a dozen gene mutations are statistically strongly associated with the probability of individual infections and severe illnesses.

The first “Type 1 Interferon” to be found. In the 1960s, scientists discovered that human cells have an internal alarm system. Its manifestation is that when the virus invades, the infected cells will produce “type 1 interferon” protein and release it outside the cell, telling the body to “attack and initiate immune protection.” But genetic defects can cause “type 1 interferon” to fail to be produced. This is equivalent to muting the alarm. Then, the virus will multiply rapidly in the body.

A study published in September 2020 showed that about 3.5% of people diagnosed with COVID-19 have genetic mutations that prevent them from producing “type 1 interferons.”

In addition, 10% of people have autoantibodies in their blood. This antibody will bind to any interferon protein released by the cell to eliminate “type 1 interferon”, further weakening and inhibiting the body’s ability to resist viruses.

“Only a small number of people will be infected because of a major gene mutation.” Alessandra Renieri, a professor of medical genetics at the University of Siena, Italy, said. “In most cases, infections and critical illnesses are the result of the interaction of many genes. .”

For example, analysis shows that several genes that contribute to obesity, diabetes, and other diseases also play a role in the infection and pathogenesis of COVID-19.

There are also studies that say that people who are super able to endure hardship will be “substantially more likely” to be infected with COVID-19, hospitalized for treatment, and for longer duration of symptoms. This is because the strong bitterness perception ability is affected by the T2R38 gene.

This gene not only enhances the sense of bitterness and astringency, but is also associated with a strong natural immune response to pathogens. People who inherit this gene from both parents cannot endure hardship, and the nose and sinuses tend to have more cilia. This helps to remove pathogens.

Under the threat of COVID-19, women may be “safer”

In July 2021, Zaz and others obtained laboratory analysis results, saying that in 100 couples, it was found that several genetic mutations work together to produce “COVID-19 virus resistance” and protect people from the epidemic.

Among them, 46 mutated genes in the pressure proteins MICA and MICB were found to be related to the symptomatic infection of the new coronavirus. In people with symptomatic infections, natural killer (NK) cells are less active. In addition, women are more prone to “viral resistance.” This research has passed peer review and is expected to be released in the near future.

“Women are safer” has been proposed in April 2020. At that time, a French study showed that males accounted for 73% of COVID-19 patients who were seriously ill and received intensive care. Part of this may be due to differences in behavior and hormone levels between men and women. At the same time, the TLR7 gene is located on the human X chromosome. It plays a key role in monitoring the activity of the virus in the human body and improving human immunity. Women have two X chromosomes, so they have two copies of the TLR7 gene. This may be the reason why women are less susceptible.

Zaz is also analyzing the genomes of 12 centenarians. These elderly people have only mild symptoms after being infected with COVID-19. Among them was a 114-year-old woman who was accused of being the “oldest COVID-19 recoverer” in the world. “They may be able to provide new defensive ideas for those with weaker resistance.”

STAT quoted its statement as saying that the next step will focus on treatment methods. Taking the twin study as an example, she told STAT: “Neuroblastoma is the second most common childhood tumor. Since neural progenitor cells are the target cells of Zika virus, Zika virus can be used to target infection and kill neuroblasts. Cells, thereby killing tumor cells.” “Our enemy, the virus, can also become our healing ally.”

But Tess was not optimistic about her “immunity”. “It’s not clear if I will spread the virus to others. I don’t know if I will survive the emergence of new and more infectious mutants.