STTT: Everything about the death of iron

STTT: Everything about the death of iron.

Ferroptosis, as an emerging method of death, has obvious characteristics that distinguish it from other deaths, including morphological changes at the cellular and subcellular levels, and unique molecular characteristics, and these characteristics can be detected in a specific way.

Ferroptosis, as an emerging method of death, has obvious characteristics that distinguish it from other deaths, including morphological changes at the cellular and subcellular levels, and unique molecular characteristics, and these characteristics can be detected in a specific way.

Recent reports have proved that there is a certain connection between iron death and other deaths, especially autophagy and Oxytosis, a death method characterized by oxidative stress and GSH consumption discovered in 2001. These two death methods are related to iron death. There is a large degree of coupling and similarity in the mechanism.

However, “iron death” was not officially defined until 2012, that is, the form of cell death caused by the accumulation of iron-dependent toxic lipid active oxygen clusters and the consumption of polyunsaturated fatty acids.

Subsequently, the study of iron death has rapidly grown into a hot research field, and many breakthrough research results have also been achieved. Iron death not only plays an important role in the development and treatment of tumors, but also plays a key role in the occurrence and development of neurodegenerative diseases and ischemia-reperfusion injury-related diseases.

This review starts with the development history of iron death research, expounds the regulatory mechanism of iron death, describes the link between iron death and related diseases such as cancer, neurodegenerative diseases, and ischemia-reperfusion injury, and discusses iron death Potential application value in the treatment of related diseases.

01. History of discovery and research of iron death

The earliest research on iron death can be traced back to the 1980s:

The key membrane protein related to iron death, xCT, was discovered as early as the 1980s. After more than 20 years of development, the classic iron death agonists erastin and RSL3 can kill BeJLR cells with RAS mutations were also discovered in 2003 and 2008. However, it was not until 2012 that researchers such as Dixon defined this death as iron death.

In the following 10 years, iron death has gradually become a hot research field, and many surprising research results have been obtained. The review also introduced important events related to the study of iron death mechanisms in recent years, clarified the research context of iron death, and provided existing agonists and inhibitors that can regulate iron death at the end of the article.

02. The main signaling pathway involved in the occurrence of iron death

As a new way of death, more and more researchers are devoted to the study of iron death mechanism. Polyunsaturated fatty acids are a component of cell membranes and are involved in the regulation of a variety of biological functions, including inflammation, immunity, synaptic plasticity, and cell growth.

However, the C-H bond at the diallyl group of polyunsaturated fatty acids is easily attacked by oxidation. Therefore, it is also an important substrate in the iron death process.

A large amount of accumulated lipid peroxides and its toxic metabolites can cause cell death. In this process, the presence of ACSL4, lipoxygenase, Fenton reaction, and reactive oxygen species will promote the further development of iron death. 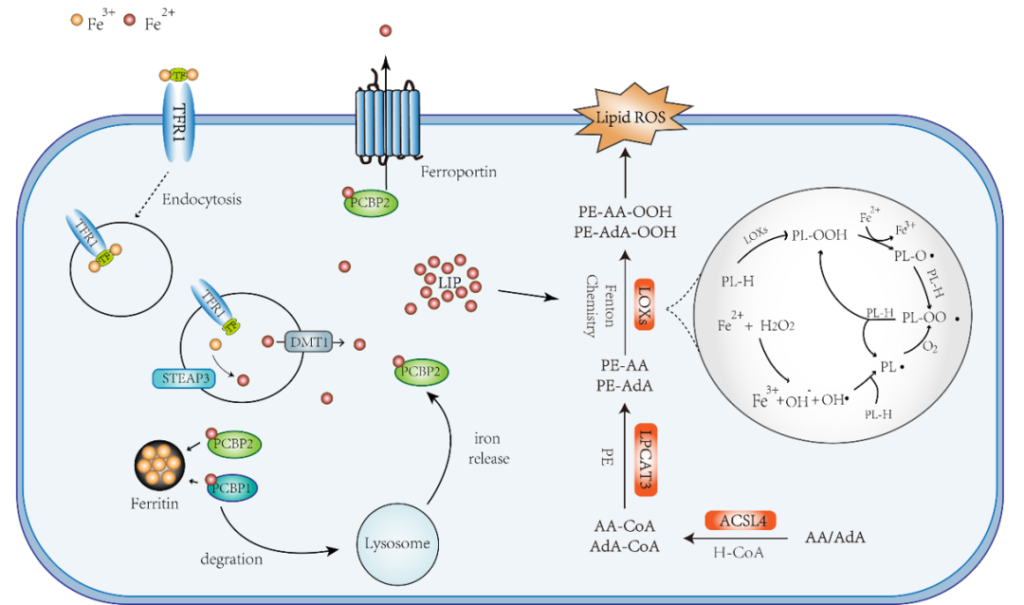 Schematic diagram of the signaling pathway of iron death

Fortunately, cells have an efficient antioxidant mechanism that degrades lipid peroxides to form lipid alcohols to maintain the oxidation homeostasis in the cells.

This balance is participated by a variety of redox active enzymes, involving lipid metabolism, iron metabolism and amino acid metabolism.

Among them, GSH-GPX4 and FSP1-CoQ10 are the two main pathways to resist iron death. In addition, there are antioxidant pathways regulated by NRF2 and endogenous antioxidants such as vitamin E in the body. 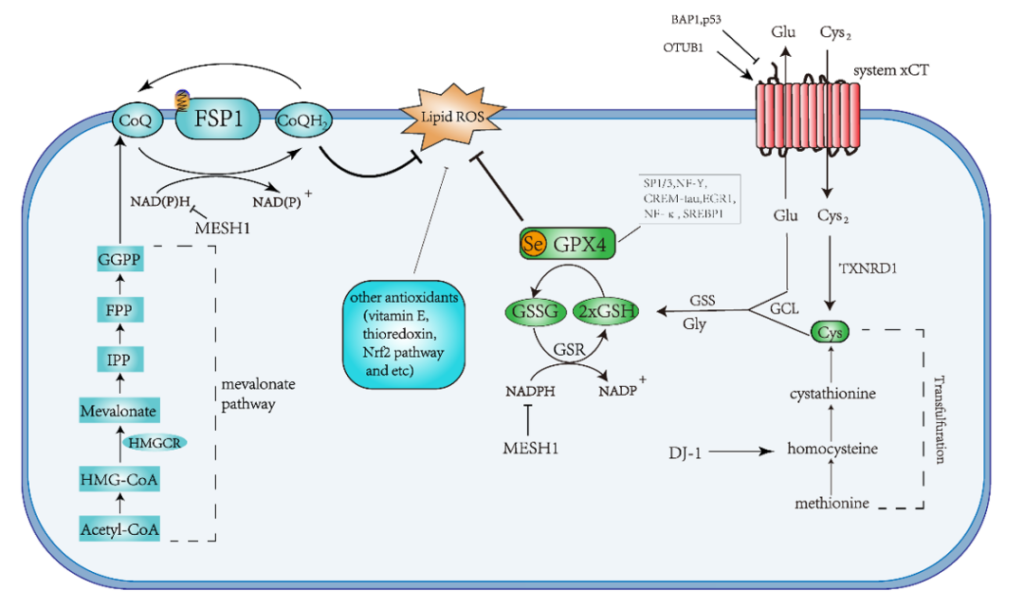 Overview of the anti-iron death pathway

03. The link between iron death and related diseases

Iron death plays an important role in the occurrence and development of many diseases, especially cancer and neurodegenerative diseases.

Iron death was first discovered and named in experiments on cancer cells with RAS mutations, and iron death agonists can kill such tumor cells in vitro. Under normal circumstances, the level of metabolism of cancer cells is higher than that of normal cells, accompanied by the accumulation of ROS. Taking advantage of this feature of tumor cells, some chemotherapy drugs such as 5-FU, oxaliplatin, paclitaxel, etc. induce cytotoxicity and increase in ROS. It is related to the formation of lipid peroxides; compared with normal cells, some cancer cells themselves have iron ion aggregation. From the perspective of iron homeostasis, regulating iron death can effectively kill tumor cells.

Interestingly, iron death also plays an important role in the process of cellular immunity and humoral immunity, and it participates in the killing of tumor cells in the body’s tumor immune process. Once the tumor cells undergo epithelial-mesenchymal transition, they will develop drug resistance and are difficult to treat. This process has always been a difficulty in tumor treatment, but many studies have shown that mesenchymal transformed cells are more sensitive to iron death Sex.

In addition, existing tumor treatment strategies include a variety of chemotherapeutic drugs and radiotherapy treatments that can induce iron death. In short, these evidences strengthen the significance of iron death in cancer treatment.

For a long time, iron homeostasis disorders and lipid peroxidation have been found in the pathological process of Alzheimer’s disease (AD) and Parkinson’s disease (PD), which happen to be the characteristics of iron death. On the one hand, the accumulation of iron and the increase of ROS levels appeared in both AD and PD. On the other hand, treatments targeting both can alleviate the pathological features in AD and PD animal models. And a variety of direct evidences have shown that GSH-GPX4 pathway has obvious abnormalities in AD and PD patients, and targeted therapy of this pathway can play a certain protective role.

(3) In addition, the article also discussed the role of iron death in other diseases such as ischemia reperfusion.

04. Outlook :  (STTT: Everything about the death of iron)

The problem is mainly reflected in the extensive overlap between iron death and other death methods (such as autophagy, necrosis, and apoptosis).

STTT: Everything about the death of iron.