The research on iron death, pyrolysis, and other cell death methods is obvious to all in the past two years, and related research on pure life information has also sprung up.

However, there are many good research methods, but the grasp of research hotspots is not so simple.

Necroptosis, as a concept first proposed in 2005, it has recently been discovered to play an important role in tumor occurrence and metastasis, and has the potential for tumor treatment.

Judging from the published articles, there has been an outbreak trend (Figure 1).

In addition, there are no articles on biographical information. If iron death and scorch death are not grasped, necroptosis is a very good choice. 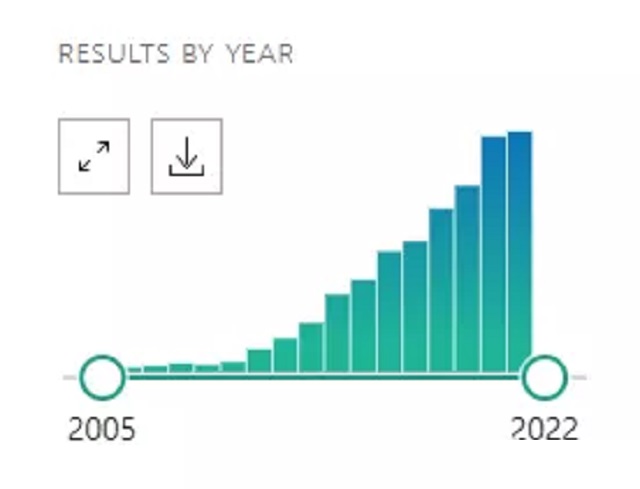 Necroptosis, a kind of programmed necroptosis, is the gatekeeper of the host’s defense against pathogen invasion. The disorder of necroptosis is also a key factor in many inflammatory diseases.

Recent studies have revealed the important role of necroptosis in tumorigenesis and metastasis, suggesting the potential of targeting necroptosis as a new tumor therapy.

Although the molecular mechanism of necroptosis has been well studied, the detailed regulation and function of necroptosis of tumor cells in tumorigenesis and metastasis has just emerged.

Necroptosis is a form of programmed inflammatory cell death, which was originally found to be a way to replace apoptosis after death domain receptors participate.

The immune system has also evolved a way to prevent viral infections by bypassing the RIPK3-MLKL upstream activation signal mediated by ripk1. Proteins containing RHIM domains, such as Z-DNA binding protein 1 (ZBP1) and adaptor-inducing interferon-β (TRIF) containing tir domains, can directly bind to RIPK3 through the RHIM domain of RIPK3, leading to independent activation of ripk1 and necrosis Sexual apoptosis.

Therefore, regardless of upstream triggers, RIPK3 and MLKL are important components of necroptosis (Figure 2). 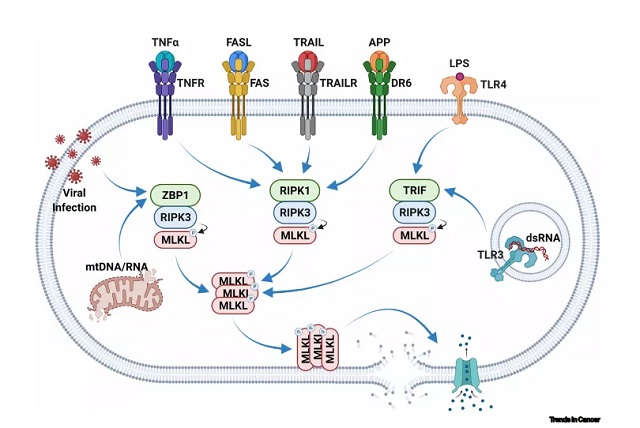 Similar to other types of programmed cell death (such as iron death and pyrolysis), necroptosis has been considered an important event that regulates tumor occurrence and progression in recent years.

However, research results indicate that depending on the tumor type, necrosis may be primordial or anti-tumor.

Tumor necrosis is usually seen in the core area of solid tumors due to poor vascularization and subsequent hypoxia and nutritional deficiencies.

Necroptosis can be detected in the necrotic areas of solid tumors in mice and humans.

Although TNFpathway plays a pro-survival and cytotoxic function in tumorigenesis, the current hypothesis is that TNF-induced necroptosis is the cause of tumor cell necrosis, because the initial role of TNF is to cause tumor necrosis.

However, recent studies have found that in different tumor models, tumor cell necrosis and tumor development do not require RIPK1 as the central node of TNF signaling, which indicates that TNF is not the trigger for tumor necrosis during tumor development. major factor.

In preclinical models of breast cancer, glucose deprivation results in the release of mitochondrial DNA/RNA (mtDNA/RNA) into the cytoplasm. Cytoplasmic mtDNA or mtRNA binds to ZBP1 and activates the RIPK3-MLKL axis in a manner dependent on the noxa protein of the BCL-2 family.

Although ZBP1 is known to mediate necroptosis induced by viral infection, it also plays a key role in necrosis under various conditions, including death induced by RIPK1 deletion.

These findings further support the observation that tumor necrosis is associated with a malnutrition environment, and these pathways can trigger necroptosis without relying on RIPK1.

The important role of ZBP1 in necroptosis of other types of tumor cells needs further study.

Recent research results also show that necroptosis is a major form of cell death of tumor necrosis in mouse breast cancer models, because the loss of MLKL in tumor cells largely eliminates tumor necrosis and kills the rest.

The death mode of tumor cells in the area changed to apoptosis.

However, it is still unclear whether necroptosis is the only cause of tumor necrosis in all solid tumors, especially human cancers .

It is unclear whether the malnutrition environment in tumors induces necrosis through mechanisms other than necroptosis induced by glucose deficiency.

For example, when the supply of cysteine ​​is blocked, iron death can be induced.

RIPK3 and necroptosis in tumorigenesis

The Cancer Cell Line Encyclopedia (CCLE) database shows that RIPK3 is low or undetectable in many human solid cancer cell lines, except for cancer cells from colon, bile duct, and pancreas, which exhibit high levels of RIPK3 expression.

In addition, RIPK3 is highly expressed in almost all liquid cancer cell lines, suggesting that the developmental origin of tissues and lineage specifications determine the expression of RIPK3 in different cancer cell lines.

Moreover, the silencing of RIPK3 may be the result of epigenetic modification of DNA methylation of genes or oncogenic mutations (such as BRAF mutations). Such epigenetic and genetic changes that lead to low expression of RIPK3 and anti-necrosis may be beneficial to the survival of cancer cells.

Depending on the type of tumor and the conditions during tumorigenesis, ripk3-mediated necroptosis seems to be anti-tumorigenic or proto-tumorigenic.

A study reported that the loss of RIPK3 neither affects the growth of myc-driven lymphoma, nor does it affect the cytotoxicity of chemotherapy-induced malignant lymphoma cells.

However, the down-regulation of RIPK3 is related to the low survival rate of several cancers, such as acute myeloid leukemia, suggesting that necrosis is anti-tumor.

In contrast, the expression of RIPK3 and necroptosis may be crucial in the occurrence of high-grade tumors such as cholangiocarcinoma and pancreatic cancer, although the mechanism is not fully understood.

In invasive and recurrent breast cancer, the up-regulation of RIPK3 is also necessary for the robust proliferation of cancer cells.

When cancer cells from the aggressive mouse breast tumor cell line MVT1 grow in the mouse mammary fat pad, they quickly restore the expression of RIPK3, and RIPK3 promotes the necrosis and apoptosis of these tumor cells.

One possible explanation for these seemingly contradictory effects of RIPK3-mediated necrosis on tumorigenesis is that in addition to mediating necroptosis, RIPK3 also plays a key role in the inflammatory response under different pathological conditions.

Although the loss of RIPK3 expression or the inhibition of RIPK3 kinase activity can prevent necroptosis, they can also inhibit RIPK3-mediated inflammation , such as interleukin (IL)-6 and CXC motif chemokine ligand 1 (CXCL1) This is a key factor regulating tumor initiation and progression.

The expression of RIPK1 and the activation of NF-κB in the process of necrotic cell death are necessary for effective cross-priming and anti-tumor immunity.

In addition, the up-regulation of RIPK1 in tumor-associated macrophages (TAMs) contributes to the immune tolerance and immunotherapy resistance of pancreatic ductal adenocarcinoma (PDAC), because TAMs transform to m2-like phenotypes in a stat1-dependent manner.

At the same time, the inhibition of RIPK1 by GSK 547 can induce cytotoxic T cell activation, produce m1-like phenotype, and enhance immunotherapy.

In the second study, the oncogenic program driven by the additional deletion of p16/19 may have different requirements for RIPK1 in tumor development. Although the role of necroptosis in regulating tumor immunity needs further elucidation, we believe that chronic spontaneous necroptosis promotes tumor development by inhibiting the anti-tumor immunity of certain types of cancer. Acute large-area necroptosis caused by chemotherapy or radiotherapy greatly destroys tumor growth and triggers an immunogenic response (Figure 3). 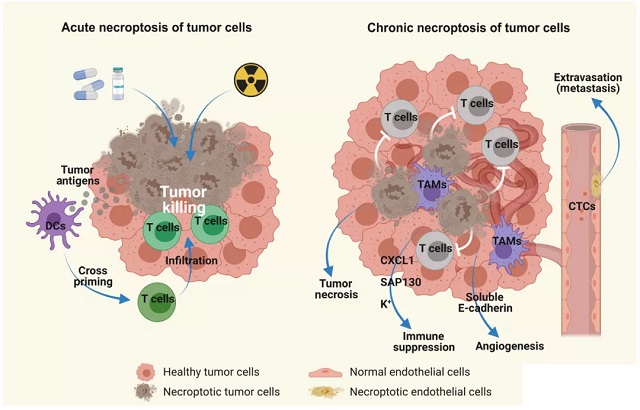 Tumor cell necroptosis may be one of the causes of tumor necrosis. Tumor necrosis is usually related to tumor invasion and metastasis, and is considered to be a feature of poor prognosis of solid cancer.

In fact, the absence of MLKL in mouse breast tumors has only a modest effect on the growth of advanced tumors, while blocking necroptosis by MLKL ablation significantly reduces the lung metastasis of breast cancer cells.

This decrease in metastasis ability is not due to the autonomous defect of cells in migration, because the metastasis of MLKL-null cells is not damaged when mixed with wild-type cells or intravenously injected, suggesting that the necroptotic tumor microenvironment promotes tumors The transfer of cells.

The division of various cell surface proteins, such as E-cadherin, is an early event in the process of necroptotic junction.

E-cadherin, previously defined as a tumor suppressor and epithelial marker, has been shown to be essential in the metastasis of breast cancer.

In addition, soluble E-cadherin is critical to the pro-metastatic effect of E-cadherin by regulating pro-survival signals and immunosuppressive pathways. In the B16-F10 melanoma metastasis model, in addition to tumor cell necrosis, endothelial cell necrosis can also promote tumor cell spillover and metastasis.

However, a recent study using the same melanoma model challenged the important role of endothelial cell necroptosis in metastasis.

Inhibition of RIPK1 or loss of RIPK3 (blocking endothelial cell necrosis) has no significant effect on metastasis.

These conflicting observations may be the result of different ripk3 knockout animals used in the two studies and the number of cells used for intravenous injection.

The former uses endothelial cell-specific ripk3 knockout host with fewer cells, while the latter uses more tumor cells in the background of ripk3 knockout performed throughout the body.

New evidence clarifies the role of necroptosis in cancer.

However, the exact role of necrosis in tumor development remains controversial.

Expansion of genetically engineered mouse models (GEMMs) targeting the key components of the necroptotic pathway in different types of cancer, for describing the exact role of necroptosis in tumorigenesis and metastasis, and understanding cancer The underlying mechanisms of necroptosis with different functions are crucial.

For example, future studies will clarify whether the role of necroptosis in tumorigenesis is tissue-specific, and whether it is proto-tumorigenic or anti-tumorigenic in different types of cancer.

Therefore, understanding the underlying mechanisms of the different functions of necroptosis in different tumor models will provide ideas for exploring targeted blocking or inducing necroptosis of different types of cancer as a new cancer treatment method.

A variety of small molecules targeting RIPK1 and RIPK3 have been discovered, including some FDA-approved cancer treatment drugs.

However, a major obstacle to the clinical application of these necrosis inhibitors is that RIPK1 and RIPK3 may not be ideal targets for blocking necrosis, because RIPK1 may not be a key mediator of necrosis under certain pathological conditions, and RIPK1 and RIPK3 are also cell inflammations. The key medium of the reaction .

Targeting RIPK1 can cause host toxicity, because deletion of RIPK1 leads to death of mice after birth, and targeting RIPK3 kinase activity may lead to RIPK1- and caspase-8-dependent apoptosis.

The failure of several recent clinical trials of RIPK1 in different diseases further indicates that this kinase may not be an ideal target to prevent necroptosis.

In addition, targeting MLKL may provide a better therapeutic response because MLKL is only used for necroptosis and it does not affect the development of mice. Despite the lack of specific inhibitors of MLKL, targeting MLKL oligomerization is a promising method to alleviate necroptosis.

Although controversy still exists, continued research on the pathway of cancer necroptosis will help improve our understanding of cancer biology and find new ways to combat this disease.