It is well known that during the development of multicellular organisms, there are a variety of predetermined and precisely controlled programmed cell death , such as apoptosis (Apoptosis) , programmed necrosis (Necroptosis) , cell pyroptosis (Pyroptosis) , and iron . Death (Ferroptosis) , etc.

Among them, ferroptosis is a novel iron-dependent programmed cell death method discovered by the laboratory of Brent. R. Stockwell of Columbia University in 2012. It is induced by excessive accumulation of peroxidized lipids . Its morphological characteristics , the mode of action and molecular mechanism are very different from other programmed death modes.

Like iron , copper is also a basic element of life activities from bacteria and fungi to plants, animals and humans. As a cofactor for essential enzymes, copper plays an essential role in life activities.

Copper is a trace element in the human body, and the concentration of intracellular copper ions is maintained at very low levels by an active homeostatic mechanism. Once the threshold is exceeded, copper becomes toxic, leading to cell death, but the copper-induced cytotoxicity mechanism It is still unclear.

The research team further revealed the mechanism of copper death, a copper-dependent cell death that occurs through the direct binding of copper ions to fatty acylated components of the tricarboxylic acid cycle (TCA) in mitochondrial respiration , resulting in fatty acylated proteins Aggregation and subsequent downregulation of iron-sulfur clusterin, leading to proteotoxic stress and eventual cell death.

What’s more, the study further identifies which cells are more susceptible to copper death, findings that can help in the study of copper dysregulation disorders such as Wilson’s disease, a genetic disorder of congenital ketosis . Developing new treatments for cancer.

Professor Todd Golub , the corresponding author of the study and director of the Broad Institute , said that copper is a double-edged sword. Too little cells cannot survive, and too many cells will die. How does excess copper cause cell death? It was a mystery, and now the mystery is finally figured out.

Todd Golub ‘s team’s exploration of this puzzle began in 2019, when they stumbled upon two small molecules that can carry copper ions across cell membranes that can kill specific drug-resistant cancer cells. One of these molecules, Elesclomol, also entered clinical trials as a potential anticancer drug, but ultimately failed to show efficacy in cancer patients, and it was unclear at the time how exactly the molecule worked.

Todd Golub ‘s team found that molecules that bind copper ions kill cells in a different way than known cells, so they decided to further explore how copper kills cancer cells. The research team first set out to test the hypothesis that the cytotoxicity of copper carriers stems from copper itself.

They found that many different molecules or ionophores that bind to copper examples induce cell death in a similar manner, and that the process is entirely dependent on copper availability.

When the team blocked known modes of cell death , such as apoptosis, ferroptosis, and more , cells treated with the copper carrier still died. The research team believes that this is a new way of cell death, and named it – Cuprotosis (copper death).

Next, the research team focused on how these copper carriers kill cells, and they found that those cells that used mitochondria for energy production were nearly 1,000 times more sensitive to copper carriers than those that used glucose directly for glycolysis, suggesting that The killing effect of copper carrier on cells is probably related to the process of mitochondrial respiration.

The research team found that copper ions penetrated into mitochondria through copper carriers directly bind to these fatty acylated proteins, causing them to form long chains and clump together, leading to cell death. These copper ions also interfere with iron-sulfur clusters. , resulting in iron-sulfur protein downregulation, leading to cytotoxic stress and death. 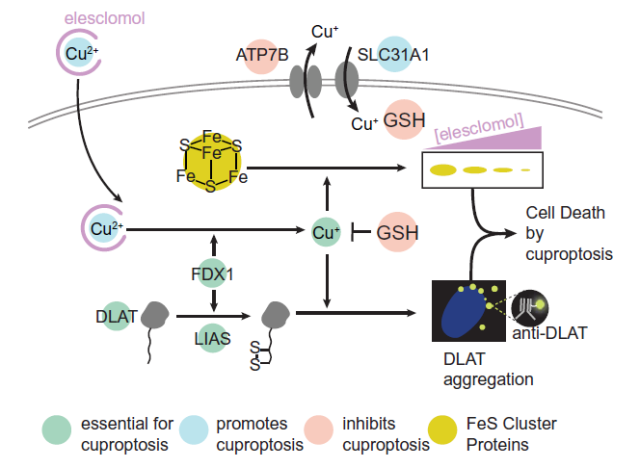 Overall, this study proposes a new copper-dependent cell death mode, Cuprotosis (copper death), and further sheds light on the specific mechanism of copper death. These findings will aid in the study of copper dysregulation disorders such as Wilson’s disease .

The small-molecule anticancer drug Elesclomol, which acts as a copper carrier, failed in clinical trials, but subsequent analyses showed that the drug helped patients with tumors that depend on mitochondrial production capacity.

The study confirmed that the FDX1 gene, which encodes Elesclomol’s target protein, is a gene that promotes copper death. Therefore, follow-up studies can further study Elesclomol in patients with cancers that express FDX1, and these cancer cells may be more susceptible to copper death.